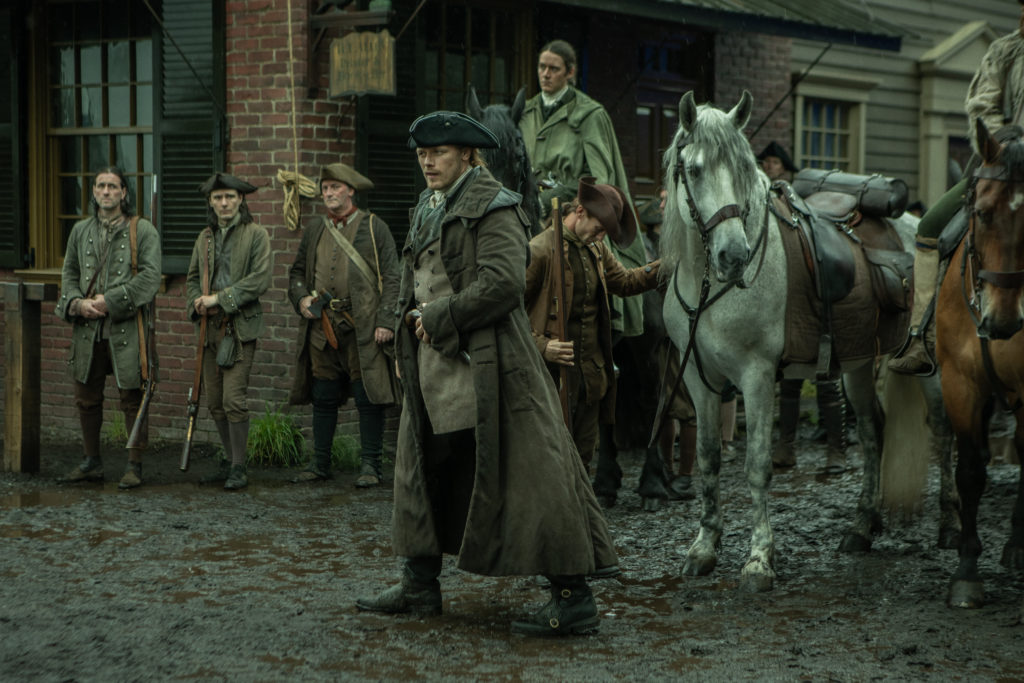 Leave the Past Behind

Joe Abernathy (Wil Johnson) is in the “previously on” segment!! (I’m going to ignore that Bonnet was too. Please die in a fire, sir. But not you, Ed Speleers, you are fantastic.)

We open with the sixties! Claire (Caitriona Balfe) is in a gorgeous church! I appreciate the time this episode took for more of Doctor Claire’s backstory.

And how many times have my prayers been answered?

Claire has a eureka moment back in the present!past when it appears she’s grown penicillin. I just want Marsali moments every episode where Claire mentions something modern, and Marsali (Lauren Lyle) grows more and more comically suspicious.

Am I terrible for feeling more of a bond between Marsali and Claire than Brianna (Sophie Skelton) and Claire?

Modern Claire peruses books, including, “The Tempestuous Pirate.” It’s a bit on the nose, but I’ll take it!

We get a modern-day between Brianna and Claire. Claire tells Brianna solemnly how she lost a patient to an unexpected allergic reaction to penicillin. (Speaking as someone who is deathly allergic to dairy and eggs, dying from an allergic reaction is a terrible way to go. Did they have epinephrine in Claire’s day? Pardon my ignorance; I can’t eat milk chocolate or cheese.)

I adore how Roger (Richard Rankin) slowly caresses Brianna as they have some pillow talk post-coital bliss. Nice little detail there, Richard Rankin!

Roger jokes about founding Mackenzie University, and Brianna is like, “That’s a great idea! I could teach math!” And Roger is like, “You’re a woman in the 18th-century ma’am.”

The people of Hillsborough thinks Jamie’s men are Regulators! Jamie fails to recruit the men when he mentions that they’d only make forty shillings.

Meanwhile, the Redcoats are gleefully chucking knives at Murtagh’s wanted poster. (I love how Lieutenant Knox (Michael Xavier) is like, “A little barbaric I know.”)

I don’t buy that Tryon wants to pardon the Regulator leaders.

Knox is like, “Oh no, what if the Regulator I killed without fair trial was a complete waste?”

I just want Claire to narrate my life, seriously.

We get another scene of Doctor Claire in action. She tells her patient, Graham Menzies (I appreciate the Tobias nod) that he needs to have surgery, and he tries to get fresh with her, insisting they be on a first name basis and that Claire had some Scots in her.

He then redeems himself by talking about his Olivia and how he’s lived in America for twenty years, but nobody still understands a damn word he’s saying.

OH MY GOD IS HE THE MAN WHO DIES?

Claire declares that Kezzie (Paul Gorman) isn’t allergic to penicillin. Marsali, bless her tells Claire that she doesn’t sound sure.

Is Claire operating on Kezzie right then and there? Is it that fast to take tonsils out?

Women will do anything for jewels…Anything at all.

My lass is more concerned with words and deeds.

Women are but a tax we pay on pleasure.

Seriously, you can just hear Bonnet smirking with that last line!

Roger confronts Brianna about the gem.

Brianna confesses that she told Bonnet that Jemmy was his.

I feel for both of them here. Roger’s given up everything to stay in the past for Brianna, and Brianna’s never had a chance to work through her PTSD. The couple hasn’t communicated to each other about the underlying issues they’ve been feeling until this moment.

Doesn’t Claire look lovely with her hair down? The parallel drawn between Brianna not knowing about her birth father and Jem, possibly not knowing his birth father is interesting. Roger gets some much-needed advice from Momma Claire about the whole “Who’s your daddy?” situation and apologizes to Brianna. She finally confides in him that she discovered that Bonnet is still alive. Roger votes for both of them to use Bonnet’s gem to go home once Jemmy is old enough. Is that what Brianna wants? I feel like she agrees just because she’s relieved that Roger isn’t mad at her anymore.

Tryon’s trick is that he’ll have everyone pardoned except for Murtagh.

Those who follow the path of the righteous shall have their reward.

Jamie tries to play into helping the hunt for Murtagh slyly, but Knox is like, “Nah, go home.”

We get another scene with Knox, but it just makes me miss Lord John Grey.

Anaphylaxis is a horrible way to die. Especially if they didn’t have epinephrine as we do now. Allergic reactions get made fun of in television and movies, but have you ever seen a loved one go through it in real life? It’s no joke. I don’t blame Claire for being pissed nobody told her.

On a brighter note: 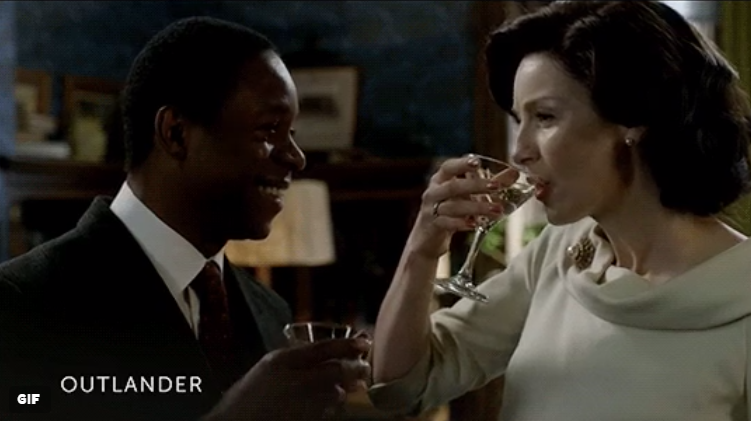 I am here for their friendship.

There’s a way Claire opens up to Joe, in the way you can only open up yourself entirely to a friend you know you can let your guard down around entirely. He tells her sometimes you need to follow your heart instead of your head. I wish there were a way for Joe to know she found her Scot.

Knox says there’s nobody he’d instead go to battle with then Jamie.

Knox finally gets the roll of prisoners from Ardsmuir.

Jamie is forced to reveal that Murtagh is his godfather.

Believe of me what you will, but Murtagh Fitzgibbons is a good man.

Knox calls Jamie a traitor. Seriously Lieutenant? Are you going to attempt to go toe to toe with Jamie Fraser?

IS THAT THE FAMOUS ADSO? 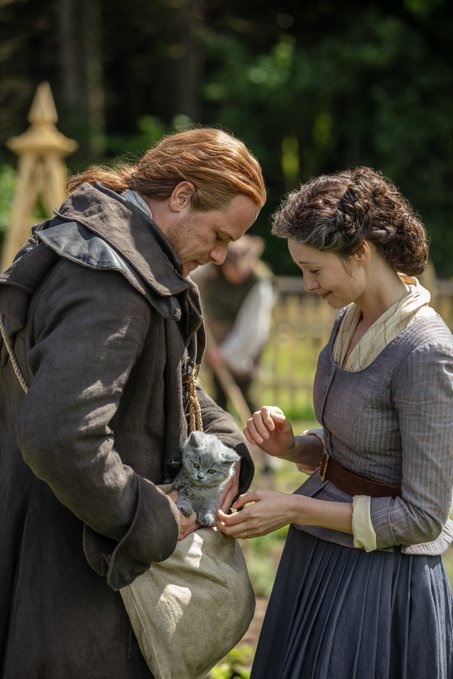 OH! This scene is before Claire and Brianna go on the infamous trip to London! That’s what we call continuity!

Claire says she feels that she owes Graham Menzies so much. She admits to Jamie that losing him led her back to Jamie. (Information update: Epinephrine injections weren’t used until 1983. How did they treat allergic reactions before? Boy, am I glad I was born in the ’90s.)

But I won’t ask about the nature of time. I’ve lived it.

I feel like every episode has been consistently good, but nothing has stood out as GREAT to me yet. I’m enjoying the season so far and Adso, but I’m still waiting for that episode that takes my breath away. Outlander is such a great show, and I always enjoy watching it. I’m just wondering how these episodes are going to build-up to the significant conflict of the season. 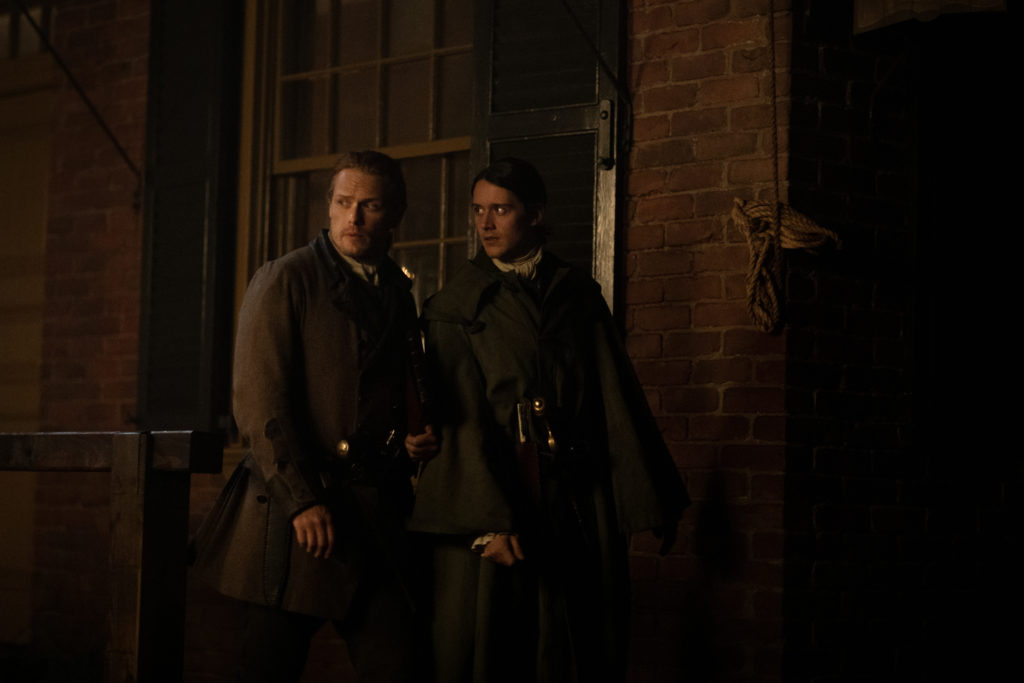 “At Jocasta’s wedding, Jamie learns Tryon’s true motivation for ending the Regulator threat.  Claire discovers a lead on the whereabouts of a former enemy from an unexpected source, but the price for the information is far higher than she anticipates.  In Jamie and Claire’s absence, Roger and Brianna must save the Ridge from an imminent threat.”