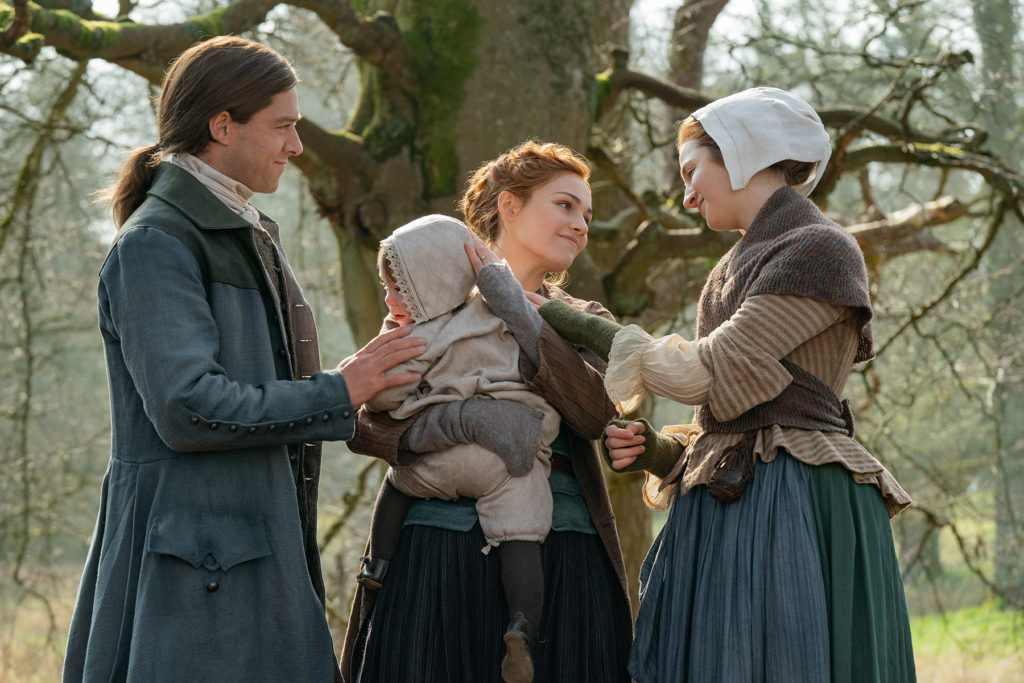 I don’t know any family, blood-related or otherwise, who doesn’t exist within a construct of speech patterns and body language, subtle gestures and likewise responses, marked glances and unspoken answers that extended periods of time and close quarters have honed to a machine-esque efficiency. Subsequently, it takes outsiders – whether casual new friends or wedded in-laws – a considerable period of time to realize such rhythms and adjust, steadily merging into the family circle with varying degrees of assimilation. There are old stories to hear, inside jokes to decipher, nonverbal language to master… the new member of the group can feel like an alien presence amidst everything that on the surface should make sense, but the underlying world is mystifying and, at times, frustrating to comprehend.

Roger is not the first person to enter the past, but for now, he is the Other in a tiny world of Frasers that has been hard-won and tenderly wrought. He has come to a world where his talents and aptitudes are not easily recognized in the frontier of the Colonies, and yet his romantic heart keeps him tenacious enough to keep pushing the boulder up the mountain. I love how the writers give Richard Rankin opportunities to sing and play the guitar (which he does wonderfully) as it gives Roger a bit of his voice back, literally and figuratively. Singing “modern” songs from his and Brianna’s own time not only binds them closer together but continually reminds her that there is another world for them beyond the one her parents are creating. The asset Roger holds over Jamie is an indefinite timeline as opposed to a definite one: he has options his father-in-law does not have, and he has knowledge of days of future past (to borrow from X-Men) that will influence decisions for his young family.

As the leader of the Ridge, Jamie continues to balance his distaste for politics with his commitment to the people of his growing community, and his past experience being used as a pawn for political or military gain increases his sensitivity to the agency of the Ridge inhabitants leading up to a time of upheaval and war. Tracking Murtagh with Lieutenant Hamilton Knox (Michael D. Xavier) is a heartsick affair as Jamie must not only feign clues as to his godfather’s whereabouts but assuage the distrust and contempt of the Scottish Regulators. What is a leader to do when philosophy and action create more setbacks than immediate progress, or when passionate fervor leads to recklessness?

Wisely, Jamie takes advantage of being saddled with Lt. Knox as escort and government stooge for Governor Tryon by drawing out the one thing a middle manager is never asked for: his opinion. The more Knox talks, the more Jamie can gauge what kind of a man he is, how deep his allegiance is to the Crown and its cause, how he views the “back-country folk,” and how adept he is at strategy. It is a different sort of chess game but one that is crucial to the future of one man as well as the entire community.

Back at the Ridge, Brianna is still trying to regain her footing after her traumatic encounter with Stephen Bonnet, and his specter looms over her thoughts even more vividly since she overheard he may still be alive. Whether he is one hundred miles away or in the next town, Bonnet, as the monster in the dark, may just as well be hiding behind the next tree. Sketching his likeness is the only catharsis Brianna can manage, each picture one more purge from the shadows. It doesn’t help that she isn’t talking to her mother or husband about it, and Bree’s natural pluck and assertiveness at shooting a rifle or helping around the homestead paints a brave front that belies the inner turmoil she’s having. Remember, even in the 1960s, soldiers were not treated for post-traumatic stress disorder, let alone victims of sexual assault, so even with a mother in the medical field, emotional counseling would still be a novel idea.

Indeed, Claire is also weighing the advantages of prescience with the risks of being a learned woman in a rustic, superstitious world. Medicine in the mid-1700s is an amalgam of religion, folk methods, natural remedies, and a heaping teaspoon of flim-flam. If Claire wants to run her clinic using modern means and methods, then she’s going to have to be clever in disguising her practices. The success of doctors lies in trust, and the people of the Ridge need to believe in her power to heal as readily as their culturally accepted norms of blood-letting and purgatives. To Claire’s advantage, frontier women aren’t squeamish around blood, and as Marsali shows in her butchering of a pig, are adept with knives. Bree’s revulsion at the autopsy Claire performs on a deceased neighbor is more indicative of a sensitivity to a perceived invasion of a human form – even for scientific purposes – than a revulsion towards blood or viscera since she is an experienced hunter and outdoorswoman. Marsali’s only discomfort is in the violation of the religious sanctity of the body and must be convinced by Claire that the benefits to the greater population outweigh the fear of cardinal humours.

Like a barnacle, Stephen Bonnet (Ed Speleers, whose performance is increasingly good) is hard to scrape away fully, and while ethical rigidity has never been his strong point, the possibility of an heir runs counter to his life of close calls and near-misses with both pleasure and pain experienced in short-term increments. Maybe it gives him a sense of worth, as his years of piracy and general lechery haven’t formed any sort of credible foundation or tangible accomplishment other than notoriety and infamy. Maybe he’s going through a midlife crisis (another term that won’t enter the cultural zeitgeist for a few centuries) and is finally asking what his life is all about (I’ll answer that: his own immediacy). Regardless of his agenda, he will continue to be a dumpster fire of chaos until someone floods him out.