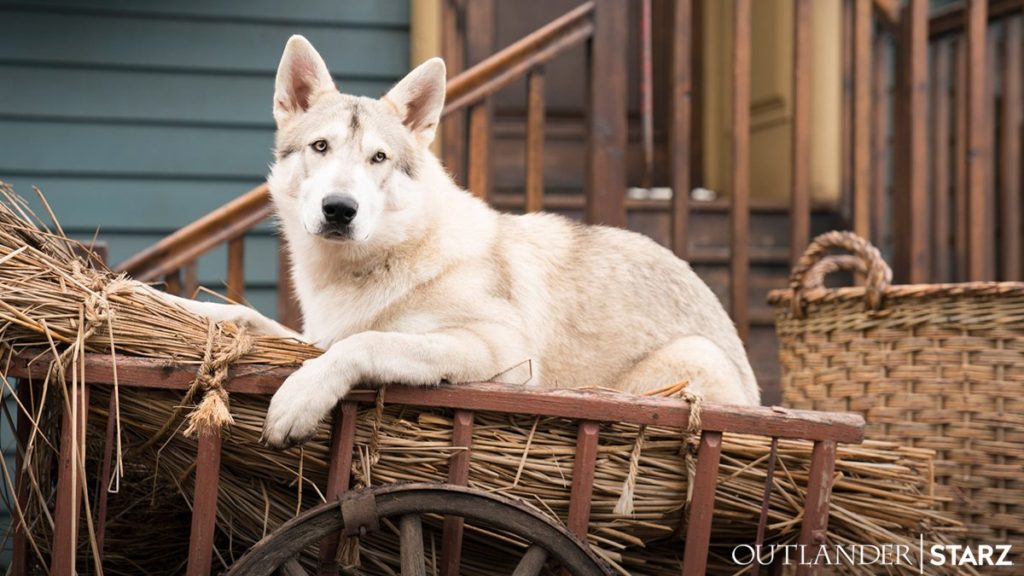 Running a site like this, there have been numerous comments on how Rollo is not exactly the same kind of dog/wolf-hybrid that is described in Drums of Autumn. The comments started all the way back when the two puppies who would be Rollo were revealed to fans.  As with many book-to-TV changes, it is not feasible to keep everything the same, and the same goes for finding Rollo.  Executive producer Matthew B. Roberts spoke with Popsugar about Rollo in the TV adaptation.  Excerpts are below, but head over to Popsugar to read the entire article.

“[Northern Inuits] are very low-key, very mellow. They like people, and the trainer was used to working with them, so that was one big reason,” said Roberts, adding that this change did then cause the writers to have to tweak Rollo’s character a bit.

“Rollo in the book growls and gets vicious when you need him to get vicious. He also fishes and does all these amazing things,” says Roberts. “But [the dog we cast] is very lovely and liked everybody and licked everybody all the time. Rollo runs around a lot and does certain things, but he’s not quite the vicious dog [from the book]. We made some adjustments for Rollo. But he’s a lovely dog.”

“They read the books, and they imagine certain things, and they’re described a certain way, and sometimes you can’t find the exact thing that you are looking for physically in where we shoot,” Roberts explained. “So finding that crossbreed Irish Wolfhound-wolf thing, you’re like, ‘Well, that’s gonna be hard.’ [Laughs] . . . [You need] an Irish Wolfhound-wolf crossbreed, and then you go, ‘OK, can we find one that’s 8 to 12 weeks old? Can we actually get the dog to a trainer and have it trained over this amount of time?’ Finding one somewhere in the world might not be a problem, but finding one in the world where we would be in control of buying it, giving it to the trainer, and then trained to be safe for the dog and safe for the actors and the crew?”