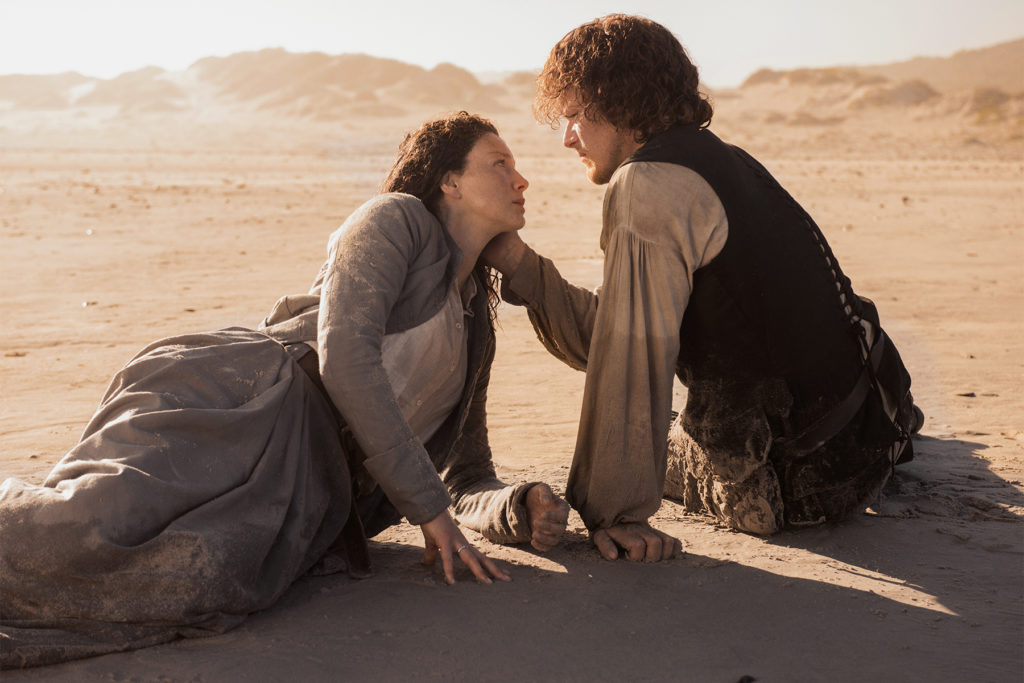 The season three finale of Outlander opens with a prologue, much like the books from which they are adapted.  Claire (Caitriona Balfe) is narrating her death by drowning, while we see her body sinking in the water enveloped in the free-floating cloth of her clothes.

The story then jumps to Claire riding in a carriage on her way to see Lady Abernathy aka Geillis Duncan (Lotte Verbeek).  The carriage is slowed by a procession of natives (or slaves?) humming a familiar tune.  The sight and sound of this are perplexing for Claire.  It is only on my second viewing of this episode that I realize the humming is mimicking the sound of the stones of with which Claire is all too familiar.

The carriage arrives at the slave quarters, and Claire is snooping around while whispering, “Ian.”  This whole scene felt ridiculous, as a white lady walking about the slave quarters in the middle of the night is sure to draw attention.  Claire ends up finding the bodies of the two boys Young Ian met in the cell in “The Bakra.”  The bodies are covered up by some plant debris, but they are just disposed of next to one of the slaves’ shacks.  This is a curious way to dispose of bodies, and I am still scratching my head as to the reason this was written and shot in this way.  Perhaps it was just to make it easier for Claire to be captured and taken away to see Geillis by Hercules (Apolinalho Antonio).

Claire just misses Ian (John Bell) telling Geillis where to stuff it before he is taken away.  What ensues afterward is an interesting conversation between two travelers, as Geillis tries to figure out Claire’s motive.  Unfortunately, Claire doesn’t have one other than retrieving Ian, and it is she who should have been paying more attention to Geillis.  Claire pulls out the photos of Brianna to prove that she had not been in this time, conniving and plotting against Geillis.  It is with that reveal that it becomes apparent to Geillis who the 200-year old child is, and what she must do to find and kill her.  After the niceties and a hug (ick!) are exchanged, Claire is locked in a room so Geillis can continue with her plan.

Jamie (Sam Heughan) is being taken to the Porpoise by Captain Leonard (Charlie Hiett) but is interrupted by soldiers.  It turns out Fergus (Cesar Domboy) and Marsali (Lauren Lyle) alerted Lord John Grey (David Berry) of Jamie’s arrest.  With a stern talking to and put-down about rank towards Captain “Lieutenant” Leonard, Lord John tells Captain Leonard that the arrest is not valid and Jamie shall be set free.  Determined to find his wife, Lord John and Jamie exchange a few words about a debt being owed once again before Jamie leaves Lord John’s presence.

Jamie to the rescue, but not before being almost clobbered on the head by Claire.  The pair run toward the drumming heard in the distance and come upon a gathering of natives (or slaves as I am not completely sure) as they dance and sing chants around the fire.  With Claire and Jamie hidden in the tall grass, this scene harkens back to Claire and Frank hiding at the stones in episode 101.  And if you did not pick that up on your own with the score rising and overpowering anything else, the show wants to make sure you get it and melds the two scenes together.  Unlike Claire and Frank, Claire and Jamie are found out and pushed into the action only to be saved by Mr. Willoughby (Gary Young).

The end of Willoughby’s story is nearing its end.  He is officially with Margaret Campbell (Alison Pargeter), they are in love, and are planning on moving to Martinique to start their lives together.  In the meantime, Margaret holds both Claire and Jamie’s hands and sees Jamie on the Culloden battlefield with the rabbit, Claire looking at the bird on the windowsill in Boston and finally sees that Brianna will see her mother again and will finally meet her father.  That’s a big hint of what is to come, non-readers.  It is at this moment that Claire finally realizes who the 200-year old child is and realizes that one of her photos is missing.  Claire finally catches up with everyone else regarding what is about to happen.  In the meantime, Willoughby has killed Margaret’s brother Archibald (Mark Hadfield) after he abuses Margaret for the last time.

Abandawe is calling the couple, as we see them approach the cave.  There are a set of stones similar to the ones in Scotland on top of the cave.  Claire immediately hears the hum of the stones, and the couple must pause to contemplate what may happen when they confront Geillis.  Claire realizes if she has to go through the stones again to save Brianna, she may not be able to come back again.  Jamie, ever the selfless man, tells Claire that Brianna is the most important thing and she must save her no matter what.

Geillis is banking on this trip through the stones as she has multiple jewels out as well as Young Ian to sacrifice.  After listening to Claire’s words about not needing a sacrifice, but being pulled toward something, Geillis is using the photograph to travel to where Brianna is.  Geillis’s manservant Hercules is in tow to help thwart any distractions.  Jamie and Hercules start fighting, while Geillis and Claire exchange words with Geillis holding a torch and Claire a machete.  The portal in this set of stones is a pool of water, and as Geillis moves to jump into it, Claire almost takes her whole head off.  While Jamie frees Ian, Claire seems drawn to the pool, and it is Jamie that snaps her out of it.

Leaving the cave, Claire is shaken by the experience, still holding the bloody machete.  It is at this moment that she remembers the bones that Joe Abernathy had back in Boston.  They were Geillis’ bones.

With everyone safely back on board the Artemis, it is time for sexy talk and actual sex between Claire and Jamie, having taken occupancy of the captain’s quarters.  I guess the writers did not want to leave fans high and dry in the last episode.

The afterglow is somewhat dark as a huge storm overtakes the Artemis.  The mast breaks and several people end up overboard, including Claire.  The prologue from the beginning is repeated as Claire descends in the water, only to be rescued by Jamie.  This was a bit far-fetched considering how rough the waters were and the massive wave that took Claire off the ship.  When they both make it to the surface with Claire unconscious, the sea is relatively calm.  As Jamie laments the loss of his wife, the camera pans far up to reveal they are in the eye of a hurricane.

A girl pokes at Jamie while he is lying on a beach.  He comes to and crawls towards Claire who is still unconscious but comes to after Jamie kisses her.  As they stare at each other and realize that the ship is gone, they are interrupted by the parents of the girl.  They tell Jamie and Claire that the other people from the ship are alive and well, and they have washed up on the beach of Georgia.  This is a fitting scene for both the episode and the season as a drone shot pans towards the wreckage on the beach, our favorite couple, and what lies beyond the dunes of Georgia.  The ending credits feature the music of a fife, which sets the tone of what is to come in future seasons of Outlander.

This episode did not play nearly as well as “The Bakra.” There are questionable scenes, interesting choices, and the need to wrap up the stories of all the characters we met in one hour.

The first issue was that of Claire finding the boys’ bodies at the slave quarters.  I still don’t quite know how this scene was arrived at or what its purpose was as it does not flow well with the rest of the episode.  Mr. Willoughby showing up with Margaret at the slave gathering is another thinker as there is no reason that Margaret, Mr. Willoughby, or Archibald would be in this place.  It is another way to end the stories of the three characters without having Jamie and Claire travel far to do so.  The body of Geillis after having her head almost taken off is completely unrealistic and a distraction.  It would have played better to have Lotte lay there with makeup on her neck.  Lastly, Claire being drawn to the pool is not something I remember from the book, and the stones in Scotland never drew her to them, other than being curious about the sound.  If she were drawn to the stones in that way, she would not have never been able to focus on Jamie when he sent her back before Culloden.

Through every season of Outlander, the writers have struggled to tread the line between pleasing book readers and serving the story as a whole.  The final episode throws book readers a bone by giving them a sex scene from the book, although it does not do much for the episode’s story.  However, it is a reconnection for the couple, having been torn apart multiple times since their reunion.  It is sweet, and it gives us a chance to see them alone, playing off each other for the longest time since the brothel.

The adaptation has done something the book could not do: give Mr. Willoughby the story he deserves and a happy ending.  The changes to his character have all been positive, although the affinity for elbows versus feet was an odd choice, but it was a one-and-done reference.  The show writers gave this strange man in a strange place a lovely story and the dignity a character like his deserves.  He got a happy ending, even if it was with a dash of death.

This season has brought some goodbyes (Frank, Black Jack Randall, Rupert) and some great introductions (Young Ian, Older Fergus, Marsali).  Claire and Jamie are back together, and all seems right in this world.  There are still obstacles, trials, and tribulations ahead for our favorite characters (and for the crew to make Scotland look like the east coast of the US).  What makes it so exciting as a book reader is to see this adaptation as a whole new take on a great book series.  This television series will never be the same as the book; it can’t be as there isn’t enough time or money to do it justice.  It’s nice to sit back and watch someone else’s interpretation, even if they make “mistakes” along the way.  I don’t think anyone can seriously doubt the cast and crew’s commitment to authenticity and doing the book’s justice.  If they didn’t, author Diana Gabaldon would surely let us know.

As we now have thirteen plus hours of season three to watch on repeat, it can now be seen as a whole, not hour by hour.  The minor details should not matter as much, as the overall arc of the characters and the story should stand out.  As fans step back from the experience that season three has been, we can look forward to what surely will be a dramatic adaptation of Drums of Autumn for season four.

Outlander will return in 2018 with season four.