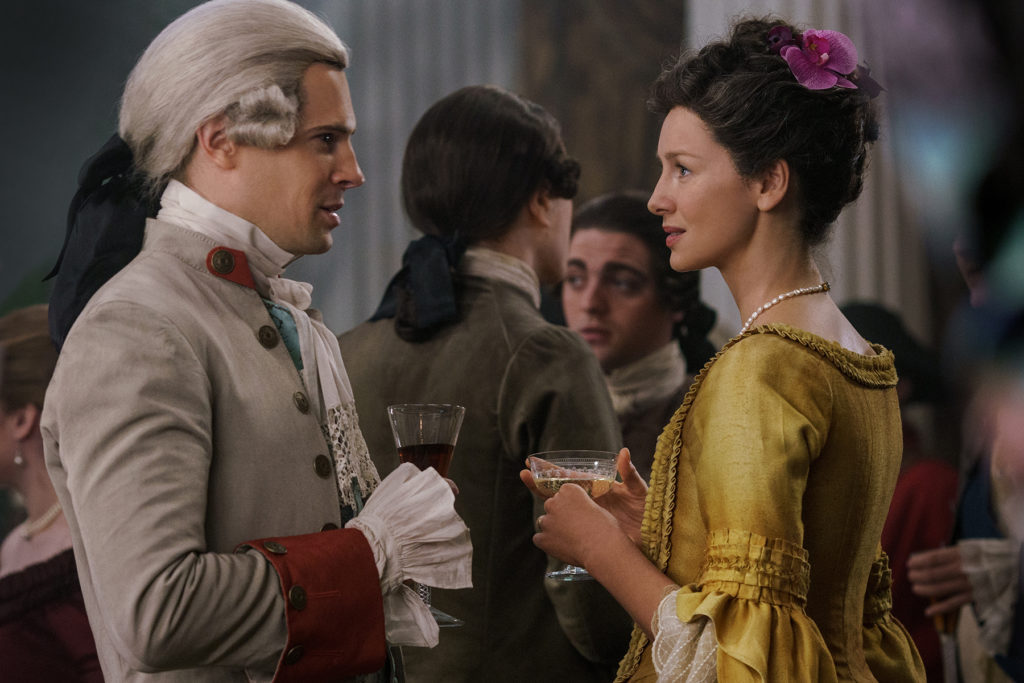 Outlander is on the cusp of ending its third season.  With only one more episode after “The Bakra,” Jamie (Sam Heughan) and Claire (Caitriona Balfe) are still looking for Young Ian (John Bell), and Claire is learning more about the past, both historically and in her relationship.  Given the number of years this season covers, the episode brings about even more reunions and another separation.

Outlander has a tell for when something interesting is about to happen in an episode; it has opening scenes before the opening credits.  “The Bakra” is no different, beginning with a jump to a few months before with Ian being dragged onto the boat.  The kidnapping crew was after the small treasure chest on the silkie island for a person referred to as the Bakra.  From there, the Bruja makes landfall in Jamaica and Ian is unceremoniously thrown into a cell with two other boys.  The Bakra has already taken a few of the boys from the cell before Ian’s arrival, and they were never seen of again.  Things do not look good for Ian in the short-term.

The first reunion is one book readers have been awaiting since all the other more important ones are out of the way.  Geillis Duncan (Lotte Verbeek) is alive and well in Jamaica, becoming known as the Bakra, along with a more proper name, Lady Abernathy.  Ian becomes suddenly acquainted with her when he is brought to her plantation.  Covered in pig’s blood (or so we are told), the naked body of Geillis is unveiled before Ian.  It looks like Claire is not the only one who has aged well.  Very much still in tune with her gifts of seduction and “witchcraft,” Geillis slinks around Ian, further solidifying her role as a snake, albeit an attractive one.  Using a special tea, Ian’s loose mouth is flung open telling Geillis of Uncle Jamie.  It seems Geillis needed the three sapphires in the treasure box to be told of a prophecy, and she is desperate to find the third.  God only knows how she knew the number of jewels in that box.  Once the information is acquired from Ian, Geillis means to take advantage of him, virgin or not, and we do not know if Ian’s story concludes there.

The Frasers finally land at their destination and waste no time picking up the scent of Ian.  Given some tips from Jared Fraser’s man in Jamaica, the couple heads to the slave market to see if anyone has sold a young, white male recently.  The scenes involving the slave market are surreal for both Claire and viewers.  Claire knows about slavery, but it is something very different to see it with your own eyes.  She is taking in the sights and sounds of this atrocity, but it becomes too much when she sees a disabled slave’s penis being showcased.  Claire lashes out, both embarrassed for the man and outraged at the display, and a brawl erupts.  To appease the slave trader, Jamie has to buy the slave, Temeraire (Thapelo J. Sebogodi), and thus through her own protests, Claire has now become a slave owner.  While he is in their employ, the Frasers use Temeraire to gain information about Ian from other slaves that came off the Bruja.

It is off to a ball for Jamie, Claire, Fergus (Cesar Domboy), Marsali (Lauren Lyle), and Mr. Willoughby (Gary Young).  They arrive at the governor’s mansion, and Temeraire is dispatched to gather information from the slaves at the mansion.  The French finery from season two has returned in the form of Claire’s yellow dress and Jamie’s waistcoat, albeit a little changed from the two decades that have passed (like how horrible wigs are in fashion).  It is in the receiving line that another reunion happens.  Lord John Grey (David Berry) is the new governor of Jamaica, and you could have knocked both Jamie and Lord John over with a feather when they come face to face.  Taken to a more private room, Jamie and Lord John catch up with what has happened since they last saw each other.  The third wheel is oddly enough Claire, not Lord John.  The subjects of Willie and Isobel are broached but careful enough as to not exclude Claire.  The focus is turned to the gigantic sapphire that Lord John is wearing; it is the one that Jamie brought from the silkie island when he returned from his brief foray into being a fugitive.  Lord John’s attachment to the jewel and the person who gave it to him is obvious, and to Claire as well.

Returning the crowded ball, Claire sees Geillis for the first time and follows her outside.  The conversation between the two old friends is much like their conversations back at Castle Leoch.  Geillis assumes that she has the upper hand and is more knowledgeable about history.  However, Geillis does not know that Claire went back to the future (insert “Power of Love” song here) and then saw Geillis go to the past at the stones.  Ever the sly one, Geillis feigns concern for Ian, knowing full well where he is (or was).  The scene is another reminder of how determined (and delusional) Geillis is as she continues to focus on putting a Scottish king on the throne.  She waxes poetically about Dougal and their child, yet she is clueless about how Dougal met his end.  While Geillis did save Claire’s life long ago, Claire does not trust her and rightly so.  If only Claire had a cock, Geillis would get what she wanted and more.

The Campbells have indeed made it to Jamaica and are in the employ of Geillis.  Margaret’s (Alison Pargeter) abilities are being used to unveil a prophecy in Geillis’ undying quest for a Scot on the throne.  Archibald (Mark Hadfield) continues to be a horrible brother, abusing Margaret’s powers for coin.  It is at the ball that the Campbells and Geillis complete their task when Lord John’s sapphire becomes available during a forced reading.  Holding all three sapphires, Margaret says a few sentences, of which only a few words I could make out.  Thank you, Geillis and Archibald for discussing what is revealed.  Slow on the uptake, I wondered about the prophecy because where are they going to find a 200-year-old to kill?  Brianna.

The buzzkill arrives at the ball.  Thy name is Captain Leonard (Charlie Hiett).  Thankfully, Fergus and Marsali spot the Captain and his friends and warn Jamie and Claire.  Making a hasty exit via carriage, Jamie and Claire free Temeraire along the way in a safe area for escaped slaves.  Alas, Jamie is caught by the Captain and arrested, but not before Jamie gives Claire the small package containing drawings and photos of his children (hello, foreshadow).  It would be at the point if I were a non-reader that I would throw my hand up in the air and say “AGAIN?”  How many times in a season can you separate the two main characters after a much built up reunion?  It becomes tedious, but in the book, there is more time and contemplation between the separations.  This luxury of time cannot be so in the span of a roughly thirteen-hour season.

This episode has to be one of the best executed of the season.  It flows well, and there are no extraneous scenes that did not have any point or are just there to please book readers.  The episode is less than an hour, but it felt like it is longer (in a good way) because the writer (Luke Schelhaas) was able to fit so much in so expertly.  It felt true to the story without any serious departures that would affect what is to come.

One of best parts of “The Bakra” is of Mr. Willoughby finding a companion, someone almost his equal, in Margaret.  In these few scenes, Mr. Willoughby’s true heart is revealed.  Both he and Margaret are outcasts, people who are not understood, oddities.  Even though they are looked down on by others, they can find similarities in each other along with kindness.  I am going to echo my fellow writer, Katherine, and say a spin-off series following Mr. Willoughby would be an excellent idea.

It is in this episode that Claire learns to be quiet in distressing or unfamiliar situations.  While she does have a major hiccup in the slave market, it is in Caitriona Balfe’s quiet moments as Claire that we learn much more than what she says.  Director Charlotte Brandström chose to focus on Claire’s silence rather than move the camera off her to dialogue.  At the slave market, she is absorbing the horror of it all, what has necessitated all of this, and her knowledge that it will not end anytime soon.  This continues at the governor’s mansion, observing all the slaves put to work. While in the receiving line at the ball, the tangible electricity of Claire as she gazes at Jamie and him back at her is probably one of the most romantic and dramatic scenes of the season, yet it is without any words.  Bear McCreary’s Jamie and Claire theme rising up and then dying down emphasizes the love between them in these few seconds of utter adoration and love.  Finally, Claire being a bystander to the reunion between Lord John and Jamie tells of her suspicions that Jamie has not expressed all that this relationship is or was.  I found Claire to be perplexed but intrigued at what else Jamie is telling her.

As we await the season three finale next week, I think we are all waiting with bated breath to witness the conclusion of the search for Ian and another reunion between Claire and Jamie.  We have one more hour of new Outlander before that ugly Droughtlander turns up again.

Just a general comment on the show: The opening credits of Outlander are a continuing spoiler for every episode.  The cast credits change every week depending on the script, and if you know which actor plays which character, certain surprises are spoiled from the beginning.  A standard opening credits scene showcasing the prominent actors for the whole season may alleviate some of this spoiler effect.

“Claire is forced to play a game of cat and mouse with an old adversary as she searches for Young Ian.  The Frasers race through the jungles of Jamaica to prevent the unthinkable.”