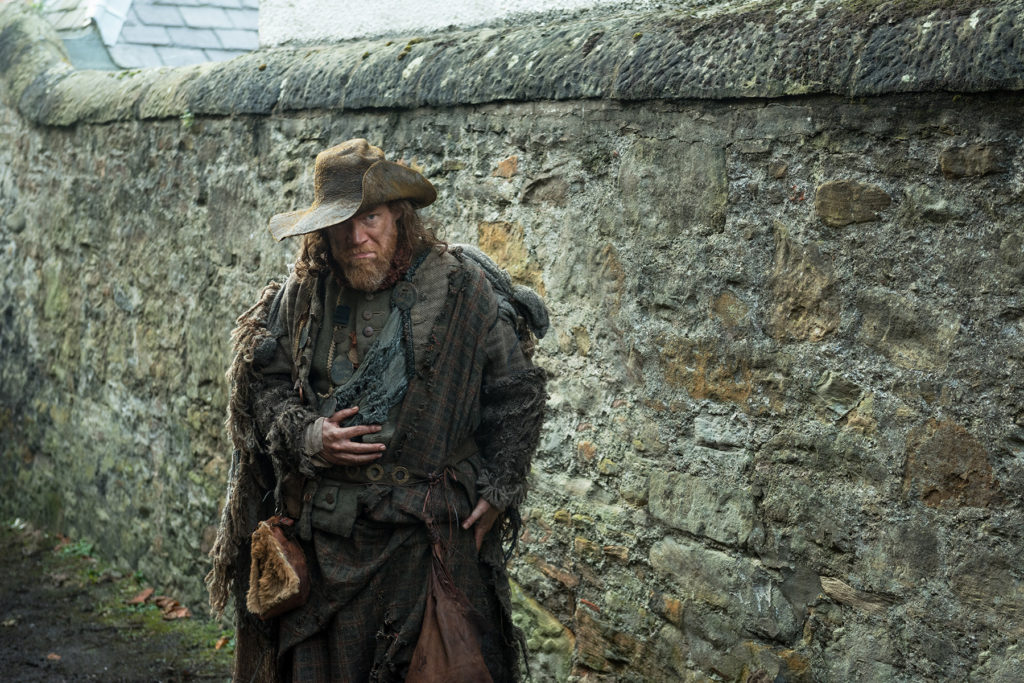 Diana Gabaldon, the author of the Outlander series, steps into the role of script writer for tomorrow’s episode, “Vengeance Is Mine.”  Some book readers may have the assumption that because she is the author, this episode will be just like the book.  Diana posted this afternoon a little warning about readers’ expectations.  Ronald D. Moore also warned of changes (and another explanation of why this episode is not like the book) in an article we shared yesterday.  Below is Diana’s statement in full, and there are no spoilers in it for non-book readers:

So, Episode 11…A Few Introductory Remarks

I know for a fact that there are a good many Major Book Fans out there gleefully rubbing their hands together and saying to their friends, “At _last_! Diana is writing the script! At last it’s going to be JUST LIKE IT IS IN THE BOOK!!”

And I realize that they’re thinking—as most people probably do—that the scriptwriter writes the script, hands it to the production team, who copy it and give it to the actors, who then follow the script to the last word, and you see onscreen exactly what was on the page.

Um. Well, no, this isn’t how it works–and I thought perhaps I ought to explain that, in the interests of people not forming unrealistic expectations. Consider the following:

1. This is the eleventh episode of a thirteen-episode series. I.e., it doesn’t stand alone. I had to work with all the events and assumptions flowing from the previous ten episodes and refrain from doing anything that would screw up the plan for episodes twelve or thirteen.

For example: My original script had several moments of comic byplay between Rupert and Angus. The original plan, at the time I’d hashed out the content of my episode with the Writers Room, was that they were going to kill Willie at the battle of Prestonpans (and we had a discussion as to what the symptoms of head injury are—I told them that it doesn’t cause people to spit blood, and told them what kind of injury _would_–so it’s actually my fault what happened to poor Angus…).

After I’d written the first draft, though, I was informed that Finn den Hertog (doubtless warned in a dream) had taken another job and wasn’t coming back to play Willie. So Angus was the next designated fall guy, and poof went all my bits of comic and poignant dialogue (there was a nice poignant bit in the chapel between Angus and Fergus, when they’re minding the horses).

I won’t tell you at this point what things I had in the script that I had to change or remove because they wanted to use those elements differently in Episode 12 or 13 (there were two important ones), but I’ll tell you Monday, after the US and Canada have had a chance to see Ep. 11.

2. Logistics. I had, as noted, horses in the chapel. Well, during the prep phases of production, the liaison people told me apologetically that they’d searched all over the areas of Scotland within reach, but weren’t able to find any church or chapel that would allow us to take horses inside, even with protective floor coverings. OK, no horses…

They evolve, they change, and normally a lot of different people are involved: not only the original scriptwriter, but the show-runner and the co-producer who’s covering the block in which that script is shot. To say nothing of the director—who doesn’t make changes directly, but will certainly ask the scriptwriter to make them—and the actors.

Some rewrites are great and obvious improvements, some are hasty revisions done on the fly to meet some exigency—and some things change back and forth, depending on who’s in charge at a particular moment. Which leads us to…

4. Changes on set. When the cameras start to roll, the script doesn’t stop changing. At this point, though, the changes are normally minor, and done very much on the fly. An actor ad libs a line, and the ad lib is great—we put it in the official script. An actor (or two or three…) has trouble with a line…

(You know the bit of Episode 205 (I think it’s 205) where Bonnie Prince Charlie makes his way across the housetops to break in unceremoniously on Jamie and Claire? And Claire is examining his wounded hand, noting that the mark looks like an animal bite? Well, there was one line (it’s still in that episode) where Caitriona was to say, “Your Highness…is this bite perhaps…from a monkey?”

I don’t know what it was about the word “monkey,” but every time she said it, she, Sam and Andrew Gower all cracked up. Completely. They did it four or five times, same result. And you can hear Sam, off-camera, saying, “This is never gonna work,” followed smartly by the director (Metin Huseyin, I think it was) saying, “Oh, yes, it will!” It did, too—he made them do it over and over until they got tired and quit laughing long enough to get the shot.)

But sometimes, a line just isn’t that important, and can be cut if an actor doesn’t like it, or has trouble with it. (I had one line in this episode that read, “…you bloody, pig-headed Scot!” I wasn’t on set when that scene was filmed, though (I’d had to come home for Thanksgiving), and when I saw it in the dailies, it had come out as “…you stubborn Scot!” So I have no idea whether Caitriona didn’t like “…bloody, pig-headed,” whether the director thought the rhythm was too pronounced for the pacing of that scene, or what. It wasn’t an important change at all—but that’s an indication of the sort of stuff that happens All The Time.)

5. Editing changes. Few people who haven’t seen a film production from beginning to end have any idea how vital the film editor(s)’ job is. Their job is often that of bringing order out of chaos, as directors will shoot a huge amount of film, in order to be sure of having the shots they want, and the great majority of it won’t be used at all.

Contrariwise, sometimes when the editing is done, it becomes apparent that something was left out that really ought to be there. In this instance, I’d had a scene in which a letter is passed to someone, but that was removed, along with a few other small cut-away scenes (this means scenes that are dealing with action not in the main storyline—as with people traveling toward the point of the main action), as part of a general tightening.

The tightening up was good—but no one (including me) realized that we really should show the handover of that letter. The lack was realized only during the early editing phases, at which point Ron hastily wrote a two-minute scene where that happens, and they filmed it hastily as a pick-up shot (one not in the regular shooting schedule, but done on a day when the regular schedule is fairly light).

So, no—what you’re going to see is _not_ Just The Way It Is In The Book, nor is every word exactly the way I wrote it. I think it _is_ pretty good, though, and trust you’ll enjoy it when you see it.