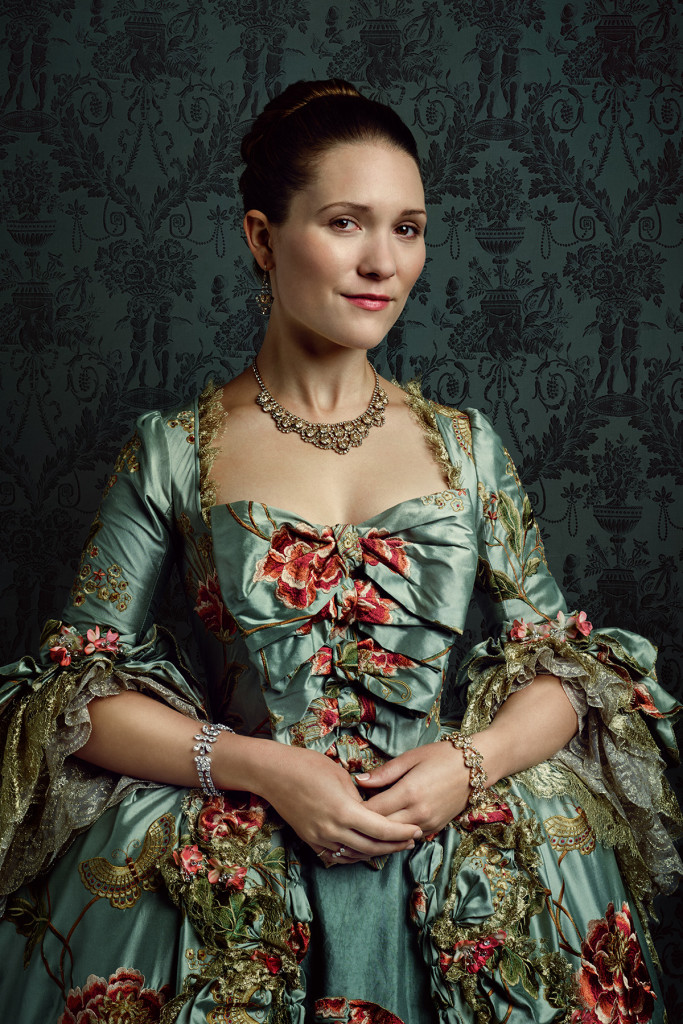 Not much fanfare was made of Claire Sermonne’s casting for Louise de Rohan on Outlander.  However, from the trailers and photos released thus far, she is a big part of the show along with Rosie Day’s Mary Hawkins.  Claire gave an interview to Female First about her role.  Excerpts are below, but head over to Female First for the whole interview.

Could you please give us a brief outline of your character, Madame Louise Marquise De Rohan?

Louise [is] Claire’s best friend in Paris. She’s an aristocrat from the highest-ranking family in France, the only family that’s allowed to be present when the King is crowned. She’s very close to all the most important families in the country and introduces Claire to them.

Absolutely. I’m so lucky because I get to wear so many beautiful dresses. My character loves all sorts of adornments. The costume designer Terry (Dresbach) says that with Louise it’s a case of more and more and more. If Louise can have little flowers and butterflies on her dresses, she will. She’s very fancy.

Definitely. She’s very alive and very light – and that shows in her choice of clothes. She wants to have fun and wants everybody else to have fun with her. She wants the world around to be smiling and happy and feel that everything is good.

Did it take you long to get into your costume every morning?

Yes, it took a very long time. When I had to be on set at 8am, my pick-ups were at four in the morning. You can imagine how long the process took – it was two and a half hours every day. After a while, I lost all sense of time!

Can you tell us a little bit about Louise’s romantic life?

Although she’s married, she’s had many lovers. That was completely normal in that world. She doesn’t say anything to her husband about it, but in that society women had the freedom to seduce other men and enjoy life.

Have you had to film a lot of intimate scenes?

No, there hasn’t been much kissing. The characters talk a lot about sexy things, but don’t act on it – it’s all very French! In my very first scene, I’m not wearing a dress, but I’m covered up by a robe. That’s exactly like Fragonard, too. You see, and yet you don’t see.