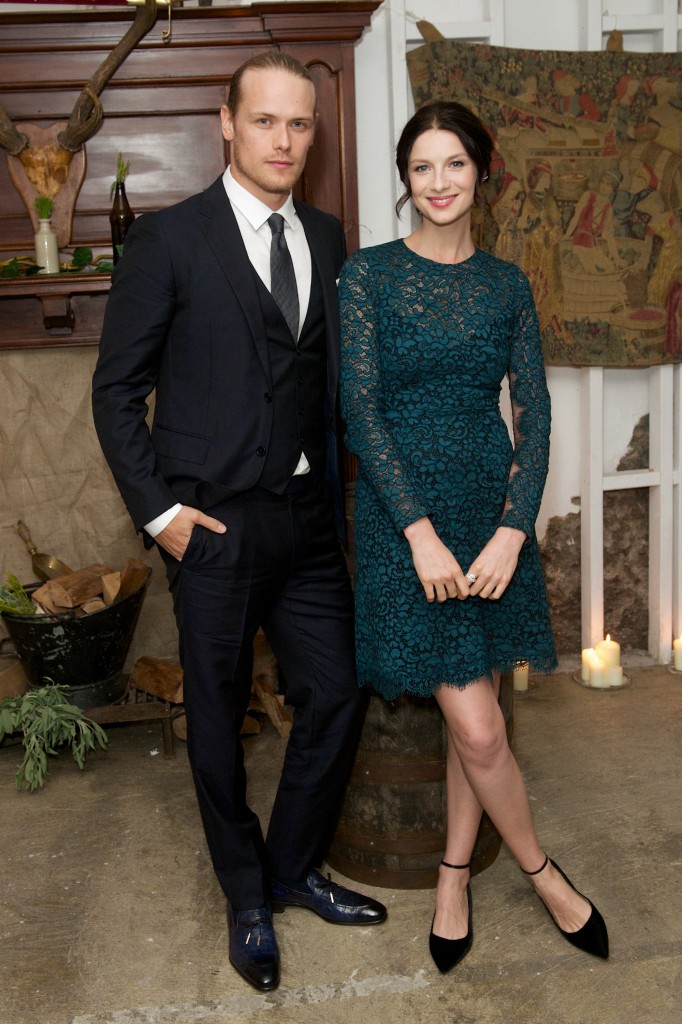 Outlander TV News was invited to participate in a phone interview with Outlander stars Caitriona Balfe and Sam Heughan on Monday ahead of the show’s premiere on Amazon Prime UK. We previously posted our portion of the interview here and you can now read the interview in its entirety, with questions from Outlander Podcast, Outlandish UK, and more, below. The pair answered a range of questions, from their research into the world of Outlander to finally bringing the show to UK audiences.

Heughan: …and does what she wants and then hopefully shoot something.

Balfe: I’m just not going to say anything more. I’m just going to leave Sam Heughan to sit and think about what he said.

Beyond Books: Do you think the mystery Highlander Frank saw in the beginning was the ghost of Jamie?

Heughan: Well, I know. I spoke to Diana about it.

Heughan: I could tell you, but I think Diana would put a spell on me or something.

Candid Chaos: Diana says that it is impossible to explain to people what Outlander is in 15 words or less. Now that it’s coming to the UK, it’s open to so many new fans. How would you pitch the show to someone who has not watched it before?

Heughan: As Caitriona said, it’s really a hard one to put into a single pigeonhole, but I think there is something there for everyone, whether you are a fan of the books or not.

Outlander TV News: Since Outlander is finally coming to UK fans via Amazon Prime this week, is there any trepidation or is it just excitement about the response to the show, particularly because in a sense you are bringing it home?

Balfe: I think we are just really excited. It felt a little strange that Outlander didn’t have a home here for so long. We’ve obviously worked so hard on this show and we’ve got such an incredible British cast and our crew is fantastic. We wanted to be able to show it in its own country, so now that we can it feels really, really exciting.

Heughan: We’ve talked about it before, but Scotland is definitely a huge part of the show and for people to be able to watch it is terrific. I think, and hope the rest of the UK really enjoys it.

Balfe: I would have to imagine that people are watching it in a slightly different way. In America, you are one step removed from knowing the Scottish culture so intimately and I think people in Scotland are going to see how authentic we are and maybe judge us a little on that. But I think that we have made something that is very authentic and we all have tried really hard to incorporate the craftsmanship that exists in Scotland, all the wealth of talent that is there. You really see it on screen and hopefully they will appreciate that.

Heughan: Absolutely. I think you have put it succinctly. I think the British audience is going to be more critical, but I think if they enjoy it, it feels like we’ve done our job.

Balfe: It was amazing. We moved the whole company up there near Aviemore. It’s so beautiful and we shot up there for almost two weeks. Honestly, it was such a special time and for the most part, the weather was kind to us while we were up there. That’s been one of the greatest things about this job for me, really getting to explore Scotland and see how beautiful it is firsthand, but I feel really great that we were able to bring that to a wider audience as well and show Scotland off in its best light.

Heughan: I really enjoyed going up to Loch Rannoch, where we shot a few times. That’s where the standing stones are. It’s just terrific every time we go up there. It feels like a little family outing. Everyone gets to go out and the crews get to stay in the same hotel. It’s really good fun.

Joe (Unknown site): When you were doing your research for the show, what’s the most interesting thing you found out and how did you use that information to build your own character?

Heughan: Diana’s books, she’s written so many of them and there’s so much material in there. They’re a good jumping off point and certainly, I go back to them quite a lot. I guess for me, it was actually the Gaelic that was a really important part of finding out about the culture and Jamie as a Gaelic speaker; what that brings to him and it certainly was a seed of the character, I think.

Balfe: I think for me, most of my research was about nurses who had served on the front lines during the second World War. Reading their first hand accounts really gave me a window into where Claire’s mindset possibly was when we first meet her and seeing what survivors they were and there was no time for self pity or anything like that. That was a real key into Claire.

Outlander Podcast: We’ve heard so much over the last year, year and a half, two years, since everything was announced with all the casting and production and now Outlander is finally coming home to the UK. With that journey behind you, what is the most rewarding part of playing the characters of Claire Elizabeth Beauchamp Randall Fraser and Jamie Fraser?

Balfe: I think it’s honestly seeing how this character has touched so many people’s lives. As an actor, you hope that you get the dance to play great characters and this definitely is one. It’s been such a dream playing her, but the unexpected side effects of that are seeing all of these woman across the world who have really been touched by having the book in their lives or the friendships that they sparked over the books. Seeing them get together and support each other, that’s been really amazing.

Heughan: Jamie Fraser has been about bringing the culture of Scotland, an authentic one, probably for the first time on tv, and share it with the rest of the world. That was one of my proudest moments.

Balfe: I mean, I think sometimes I’m quite feisty.

Balfe: I’m not sure if I would have been as resourceful as Claire was, but I like to think that in my life I’ve adapted to some pretty strange situations and come out on top, so hopefully I would have.

Outlandish UK: Out of the sixteen episodes that you filmed, which one is your favorite?

Heughan: Episode thirteen. There are so many, but I feel that he makes a choice there that is quite important.

Balfe: Episode five was one I really loved just because we got to go on the road and it was the first time the show opened up past Castle Leoch. I just love that and the camaraderie of all the men and its the first time that Claire starts to feel like part of the Highland gang in a sense. That was a favorite.