[This is not a spoiler-free review of the episode.  If you have not seen the episode yet, read it at your own spoiler risk.] 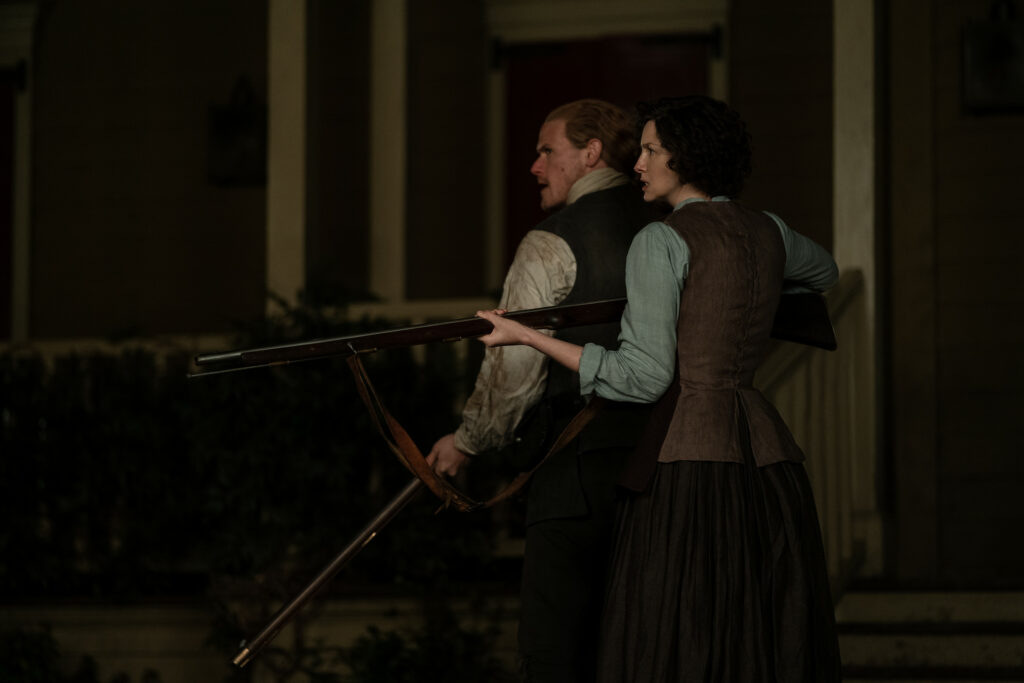 The season six finale of Outlander starts with the opening credits, which is sometimes indicative of Outlander that the episode wants to dive directly into the story.  What followed the opening credits was a flash-forward to a diner in Claire’s time.  Upon seeing this was a knee-jerk reaction that we are going to do some time-traveling this episode or do some experimental episode, because why not? It’s the finale.  Thankfully, this brief look at the future was just Claire (Caitriona Balfe) thinking about what her last meal would be, referencing inmates’ last meals before execution in her time, in discussion with Jamie (Sam Heughan) later in the episode.

The episode wastes no time picking up where the previous episode left off.  Richard Brown (Chris Larkin) and the Committee of Safety are at Fraser’s Ridge demanding Claire’s arrest for the murder of Malva and her unborn child.  We already know that Richard may have ulterior motives since the death of his brother Lionel whose body was quite plainly dropped at Richard’s feet by Jamie.  Of course, Jamie is not one to acquiesce to those who have supposed morals or the right to do anything.  Luckily, Mrs. Bug (Sarah Collier), Lizzie (Caitlin O’Ryan), and one of the Beardsley twins (Paul Gorman) were witnesses to the Committee’s arrival and demands.  Claire and Jamie hope they will bring reinforcements.  Unfortunately, what happens in the short term is an all-out shoot-out between the Frasers and the Committee.  I’m sure Jamie and Claire maybe wished they hadn’t had so many windows or doors on their Big House during this predicament.

Eventually, a stalemate holds until the Fisher Folk descend onto the Big House with torches and hateful words.  Somehow, Hiram Crombie (Antony Byrne) becomes the trusted negotiator, and the Frasers exit the house.  While barbed words are traded with declarations of innocence, the friends of the Frasers finally arrive on the scene, but their numbers and firepower are too little to win against those already here.  Ever the calculating man, Jamie knows they cannot win; however, he is loathed to trust Richard Brown with his wife no matter what his cause is.  A defeated Tom Christie (Mark Lewis Jones) comes out of the shadows, who speaks for Claire and Jamie to be treated fairly, even if he must stand up for Claire.  He asks that Jamie be able to go along with Claire so that he can continue to protect her, and this is agreeable. 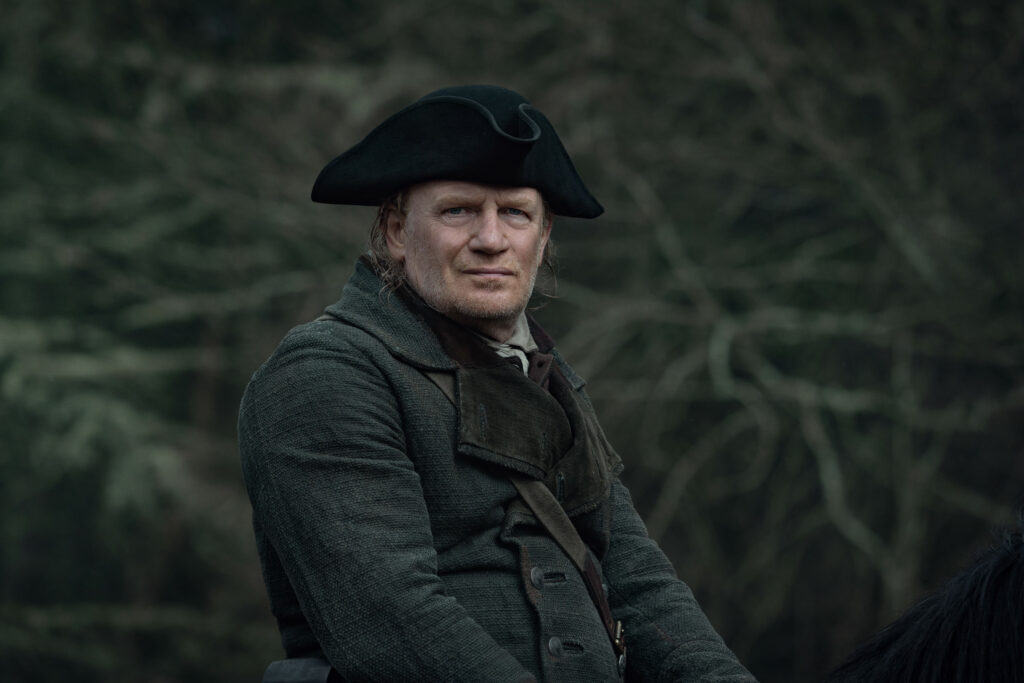 The road to justice is rough and unforgiving for Claire and Jamie, along with their escorts, including Richard Brown and Tom Christie.  It isn’t such a quick trip when Salisbury’s court has essentially disbanded due to the upcoming struggle for independence.  Cross Creek is out of the question because of Jamie’s connections, so Wilmington, 200 miles away, becomes the destination.  Along the way, Richard has taken it upon himself to spread some nasty words about Claire and Jamie, which will not be easy to undo if they make it back.  Those words also make for a nasty run-in at a camp which results in the attempted stoning of Claire except for the efforts of Tom Christie himself in an attempt to calm the crowd.

Unfortunately, there is a plan afoot to separate Claire and Jamie.  Jamie is tackled while out of the covered wagon to get a drink, and Claire is stopped from exiting.  The wagon with Claire takes off, and Richard accompanies her.  Tom catches up and demands to know what is happening.  He appears to be okay with Richard’s word and will not leave Claire to check on Jamie.

Nothing really good comes of Jamie and Claire’s stories in this finale.  Claire ends up in prison in Wilmington, but because of Tom’s kindness, she is given money for maintenance, and it appears that  Tom won’t be leaving the area anytime soon.  Jamie woke up from being knocked out to almost being taken on a ship back to Scotland, but thanks to Ian (John Bell) and their Cherokee friends, Jamie is saved.

There is a whole other part of this episode that I haven’t mentioned yet because, to put it plainly, it really should not have been included (or inserted).  It is Roger (Richard Rankin) and Brianna’s (Sophie Skelton) journey on the road with Jemmy for Roger to become a minister.  All of their scenes play no part in what was going on with Jamie and Claire, and it took away from the tension and excitement of what was going to happen with the couple.  I did not need a whole sex scene in a tent with Roger and Brianna and fast-forwarded through it.  The only important part was affirming to Roger and the audience that Jemmy is indeed Roger’s son and not Stephen Bonnet’s due to an inherited nevus on Jemmy’s head.  We know that this season was cut short from twelve episodes to eight, and it felt like these scenes were from another episode and just stuck in this episode to give Roger and Brianna a little bow on their story until we see them again.  The scenes did not feel like they belonged or should have been included in the season finale.

If you haven’t read the books in a while, you might have been googling what happens next to Claire just like I did.  Suffice it to say, if the writers decide to follow along with what happens to Tom Christie, they have certainly laid the groundwork in this episode.  Although, I would have to believe that even non-readers could pick up on Tom’s change in his countenance regarding Claire.  Certainly, his behavior has changed since he was first introduced.  Throughout this entire season, Mark Lewis Jones and his depiction of Tom Christie have been a highlight.  He has a presence that demands attention, and even when he has become battered and withered by some from his personal losses, he still continues to demand attention for what is right.   He will be a welcome sight when we can see him in footage for season seven.

I wouldn’t say that the episode ended on a cliffhanger.  Claire is in prison and isn’t going anywhere, and Jamie is saved and en route to finding Claire.  Roger, Brianna, and Jemmy are off on their little journey with no harm coming to them.  What is left is the continuation of the story, which, unfortunately, audiences won’t see for at least a year.  What I find unique about this conclusion is that it has Claire in a rut, one that seems more permanent (other than time travel) than the other predicaments we have seen Claire get herself into in past seasons.  But of course, we forget the connections that the Frasers have both in government and familial that may lend Claire to getting out and being acquitted of her supposed crime.  Also, the growing cause of wanting independence from England plays a part in the story, as was hinted in this episode.

This season of Outlander has been impactful and mostly purposeful and direct with its storytelling.  With only eight episodes, there wasn’t much dilly-dallying with any extra time taken away from the main characters.  There wasn’t room for the writers to get experimental or take things in a direction that wasn’t needed.  My only season-long issue was the use of the ether with Claire.  It wasn’t needed, and the loud groans of my friends every time she went for the ether made me feel like I wasn’t alone in my observation.  With how well, in general, this season was liked and what great performances the writing and directing were able to get from the cast, it almost makes me want eight-episode seasons from now on.  Saying that, I am a bit hesitant for a sixteen-episode season seven with all the extra time now given to the story.  If we can keep the quality of season six and expand it, I have high hopes that maybe next year I’ll be back singing just as high of praises as season seven as I did for this season.