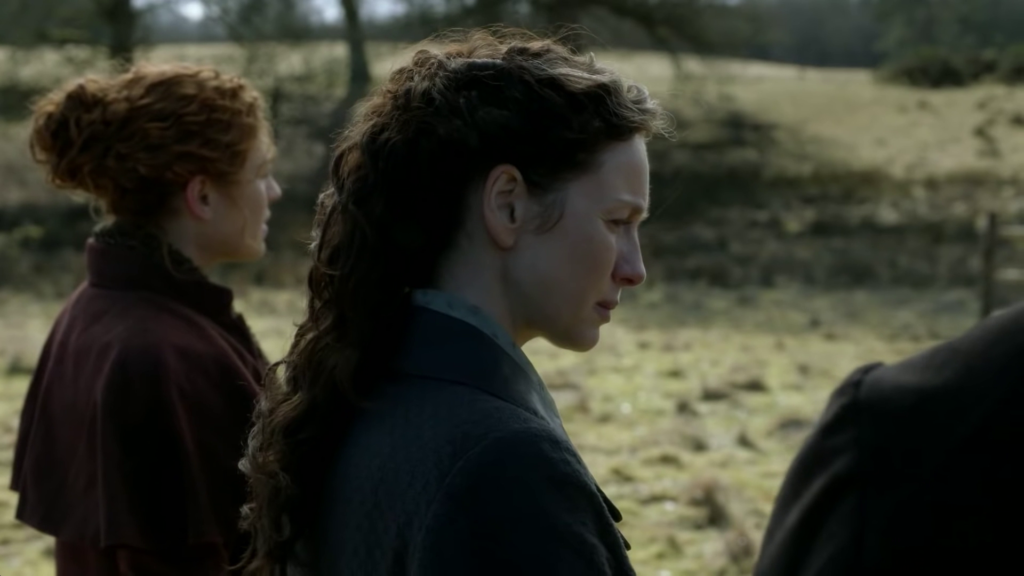 Give Caitriona Balfe an Emmy ASAP

Episode 606: “The World Turned Upside Down”

I consider myself to be a feminist. You know, supporting fellow women, not tearing them down or CUTTING THEIR BEAUTIFUL, CURLY LOCKS WHEN THEY’RE NEAR DEATH.

Yes, Malva’s (Jessica Reynolds) actions in this episode really had me regret calling her an innocent marshmallow in past episode reviews.

This episode was BRILLIANT in demonstrating how patriarchal standards hurt EVERYONE. Malva was trying to protect her baby’s birth father, and in her attempts to salvage her reputation, she damaged Jamie’s (Sam Heughan) and Claire’s (Caitriona Balfe.)

Because we all KNEW Jamie would NEVER. 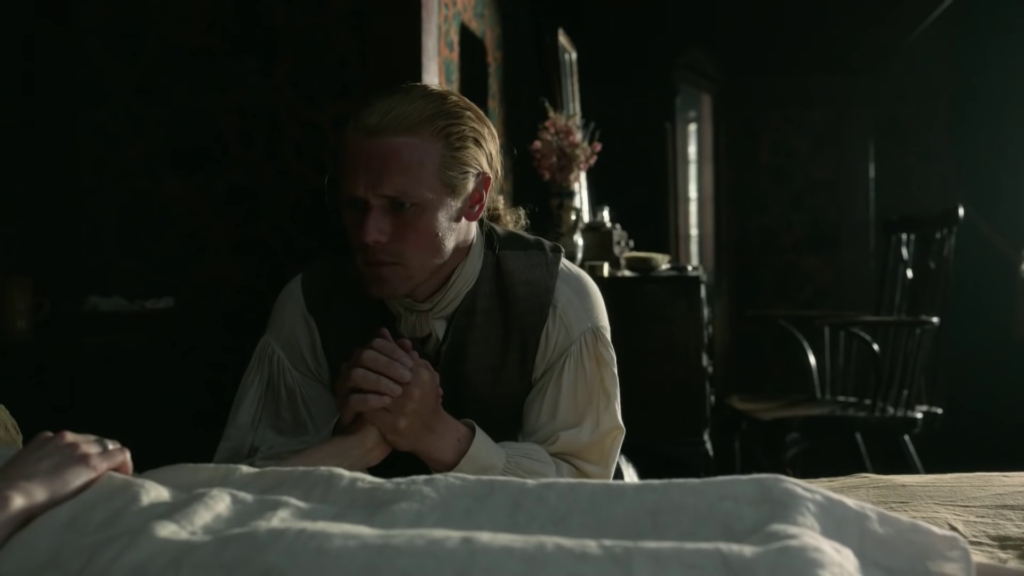 This man? Cheat on his wife when she’s dying? PLEASE.

But let’s backtrack a bit. The bloody flux has hit Frasers Ridge, and Claire goes into badass doctor mode.

But what happens when the only healer falls ill?

Of course, there was no way Claire would die, but man, was it tense waiting for her to recover. One night Claire sees Jamie drinking and Malva approaching him and….

NOTHING HAPPENED, MALVA, YOU NOT SO INNOCENT MARSHMALLOW.

I’m all for women doing whatever the hell they want with their sex lives but DON’T BRING ANOTHER FAMILY DOWN IN THE PROCESS.

Jessica Reynolds has done a fantastic job of making me feel wholly conflicted about Malva. At one moment, you can’t help but feel sorry for the situation she’s in, but then she flips a switch, and boom, Claire’s a witch. 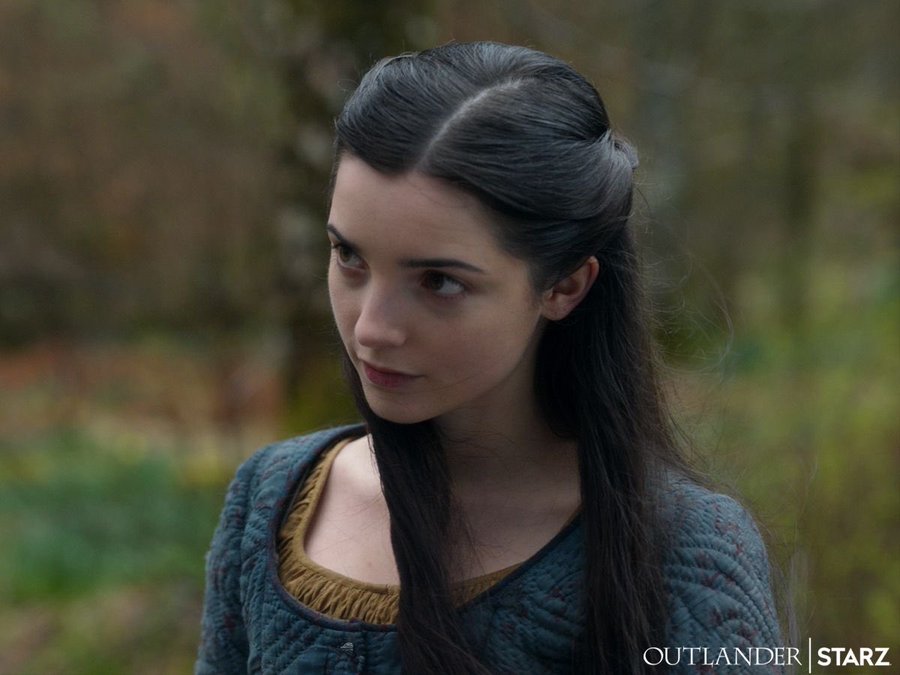 Just cry over your unrequited crush on Jamie in a journal like the rest of us!

The thing is, Malva might act diminutive, but the girl will try to survive by any means necessary….well, until later, but we’ll get to that.

So Malva accused Jamie of being the father of her child, but not one to stop there, Malva paints a sordid picture of how Jamie had her AGAINST THE WALL AND –

Seriously, if only Malva could have taken up romance novel writing instead. She has a vivid imagination.

But I want to highlight Claire and Jamie in the stables.

We all know by now that Sam Heughan and Caitriona Balfe earned an Emmy nomination SEASONS ago, but my GOODNESS, that raw emotion in the stables nearly brought me to tears. 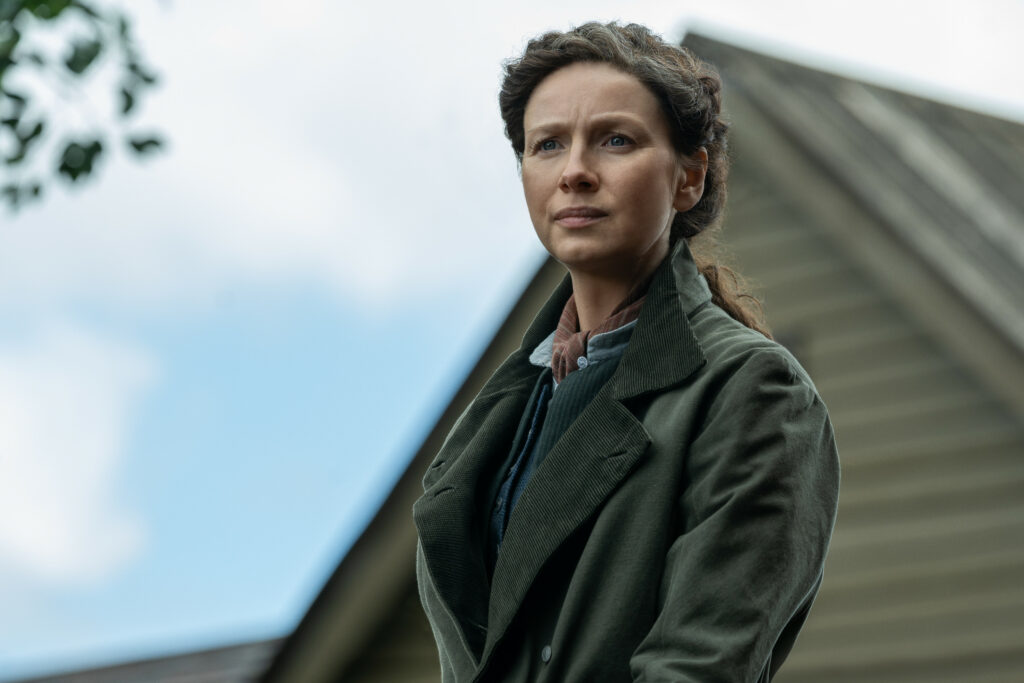 I may be American, but all hail the QUEEN OF THE RIDGE.

I think it’s easy to take Claire’s strength for granted. So it was genuinely disconcerting to see her voice a moment of doubt when she talked to Jamie about the whole Malva mayhem.

I like that Jamie doesn’t try to reassure her with empty words. He recognizes that she’s in pain, and like a real man, he takes it and doesn’t offer any excuses. Jamie knows Claire made a HUGE sacrifice coming back to him. So he confesses about his night with Mary MacNab (Emma Campbell) way back in Season 3.

You can practically hear Claire’s heart heaving a huge sigh of relief. Don’t get me wrong, I think Sam’s an incredible actor, but THIS WAS CAITRIONA’S EPISODE.

Claire attempts to make peace with Malva and comes so close to getting Malva to open up about what’s really going on. THAT is maturity, ladies and gentlemen. Claire recognizes that Malva is in a difficult situation.

And then Malva’s brother Allan (Alexander Vlahos) ruins it with the whole witch thing. Malva immediately turns against Claire once again, and it’s frustrating after Claire’s efforts to make peace. 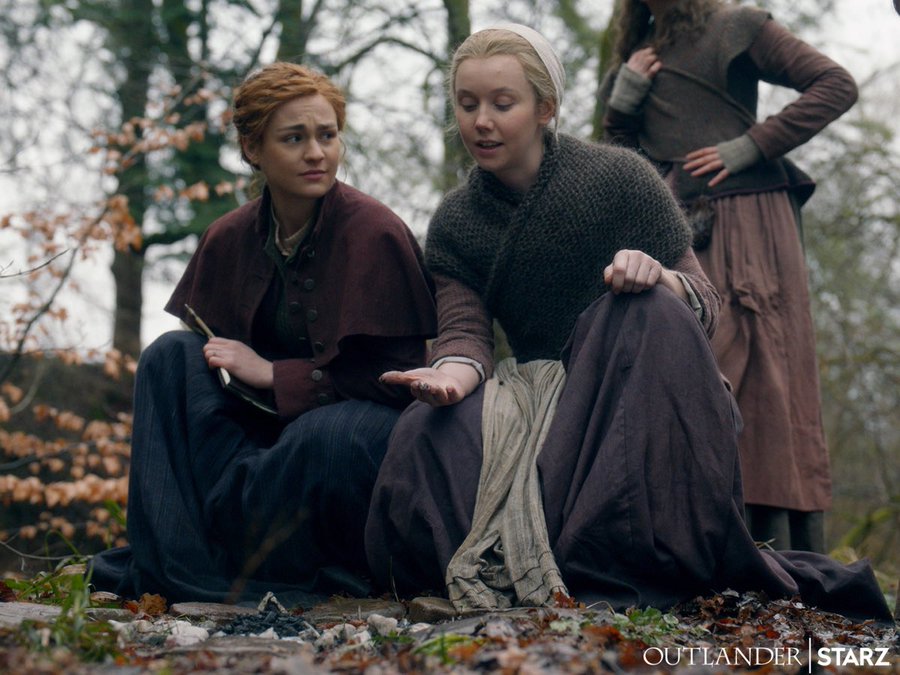 It’s funny how this episode is packed full of drama, to the point where the impending American Revolution feels like an afterthought. Jamie finds himself canceled from the prospect of becoming a delegate to the Continental Congress because of the Malva scandal.

But seriously, WHO is the father? To think a paternity test could’ve solved the drama of it all! (Is there a colonial Jerry Springer anywhere?)

Ian (John Bell) is convinced that the baby is his. He confesses to Claire that he slept with Malva once because he wanted to feel alive again. However, it just made him realize he was still in love with Emily.

I thought it was sweet for Ian to come clean to Claire, but something isn’t adding up. Why would Malva accuse Jamie of being the father when Ian was unencumbered and unmarried? After all, if it was Ian’s, the two could get married, and that would be that (Ian even sweetly offers to marry Malva to settle the matter.)

Something isn’t adding up here. 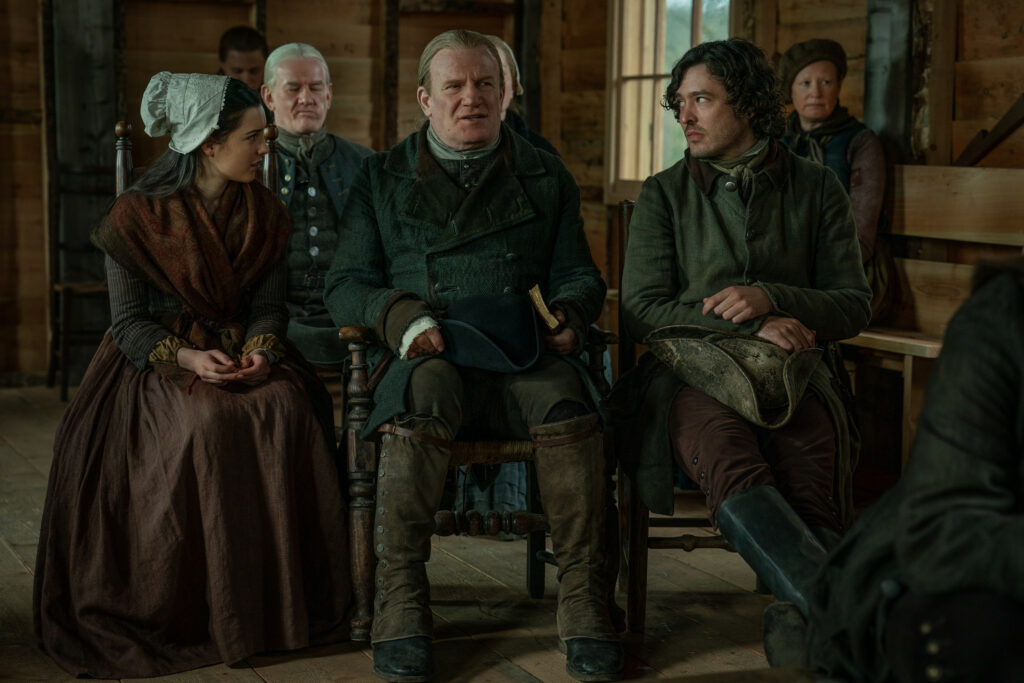 Who is Malva trying to protect? If she thought accusing Jamie was the safer option, then the birth father’s identity must be one hell of a doozy. I am completely stumped.

The father DOESN’T want to be discovered because CLAIRE FINDS MALVA DEAD IN HER GARDEN?

MALVA IS DEAD IN THE GARDEN. OH NO. PEOPLE ARE GOING TO THINK CLAIRE DID IT, AREN’T THEY?

It was utterly heartbreaking watching Claire try in vain to save Malva’s baby. But sadly, Malva and her child didn’t make it, and Claire is left to endure further trauma in her GARDEN.

So Malva knocked at Claire’s door right before Claire took the ether. Was she trying to seek shelter from her killer, so she tried to go to the one woman she knew would protect her? OH MY GOD. 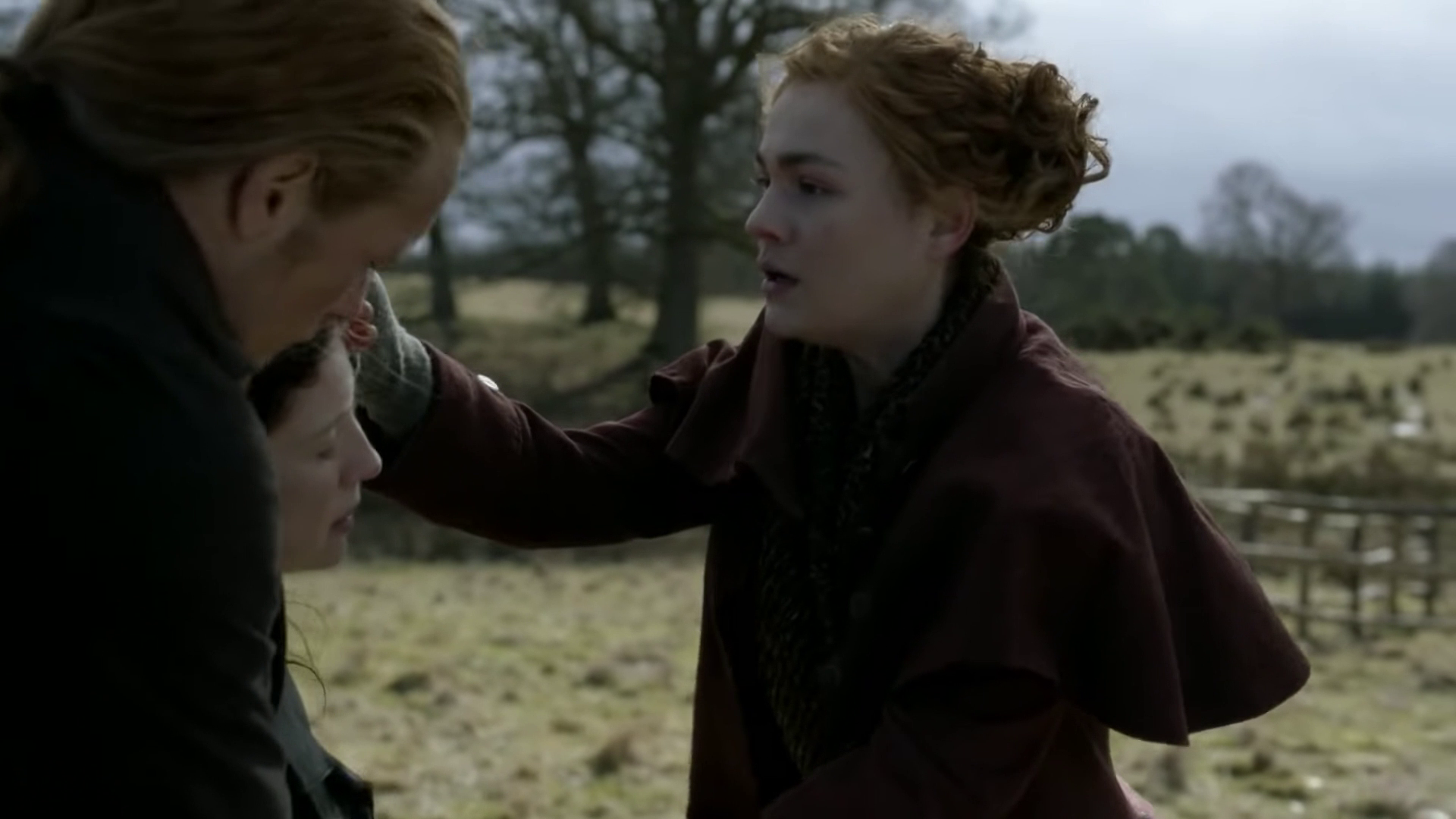 Seriously though, that last scene was pure nightmare fuel. Yes, Malva acted horribly in this episode, but she didn’t deserve THAT.

I haven’t felt so conflicted by a female character in a LONG TIME. One thing I love about Outlander is that it has a whole BEVY of compelling female characters. Yes, we’ve got our resident badasses, Claire and Brianna, but Outlander shows that there are other women out there who have to find the strength to survive in their own way in a world that works against them.

Did Malva act like a coldhearted, you know what, sometimes? Yes. Was it wrong for her to accuse Jamie of being the father of her child? Also yes. But Malva was clearly in an awful situation, and people don’t always act saintly when they’re trying to survive.

BUT SERIOUSLY, WHO KILLED HER? IT HAD TO BE THE REAL FATHER, RIGHT?

This season has been absolutely phenomenal so far, hasn’t it? ARE THERE SERIOUSLY ONLY TWO EPISODES LEFT?

Favorite moment: The stable scene. Give Caitriona an EMMY ALREADY.

Worst Character So Far: The amoeba that almost took out the Ridge. Also, Malva’s murderer.

Synopsis: “Claire tries to overcome her demons as a nefarious rumor begins to spread on the Ridge.”