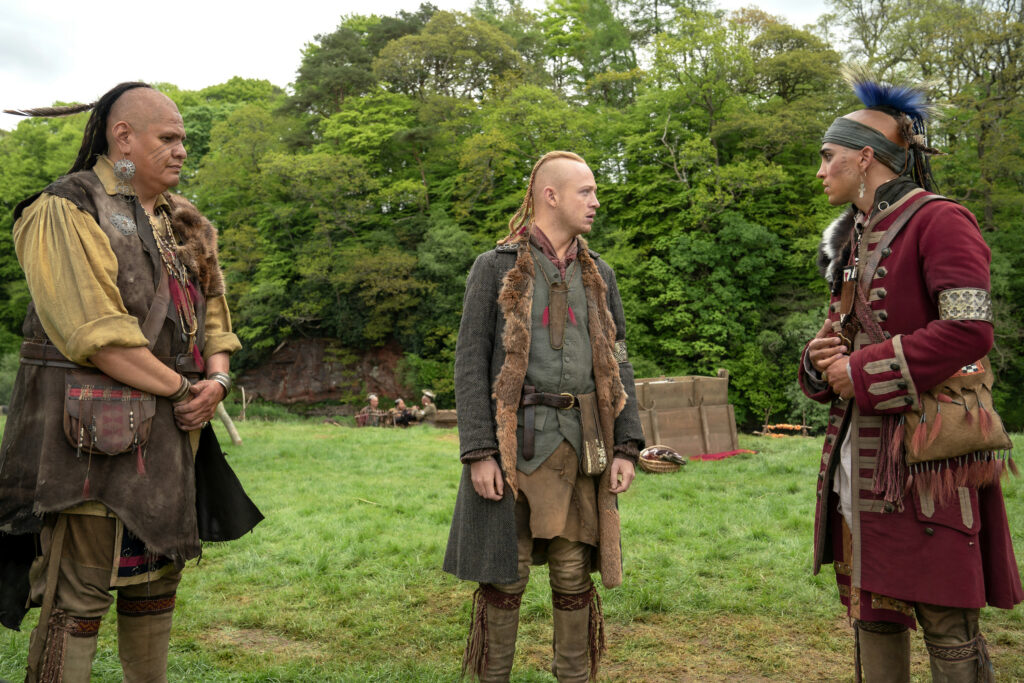 Is Everyone Okay After Watching This Episode?

After watching this excellent episode, I feel like it would be insulting to keep addressing Ian (John Bell) as Young Ian. He’s been through hell and back but has still remained loyal to the people he loves.

Sadly, sometimes love, and loyalty can lead to heartbreak.

The episode starts with a flashback to the moment when Ian undergoes a ceremony to join the Mohawk tribe. The Chief swears loyalty to Wolf’s Brother, Ian’s official Mohawk name.

IT HASN’T EVEN BEEN FIVE MINUTES AND THE EPISODE, AND I’M PASSING OUT WITH LAUGHTER.

It’s the serious way Jamie says it, too, like he thinks he’s paying his sexual prowess the highest compliment. This moment just made me want an Outlander mini-episode series where Claire explains modern movies to Jamie, and he responds by using popular movie phrases on Frasers Ridge hilariously out of context, completely perplexing the settlers. 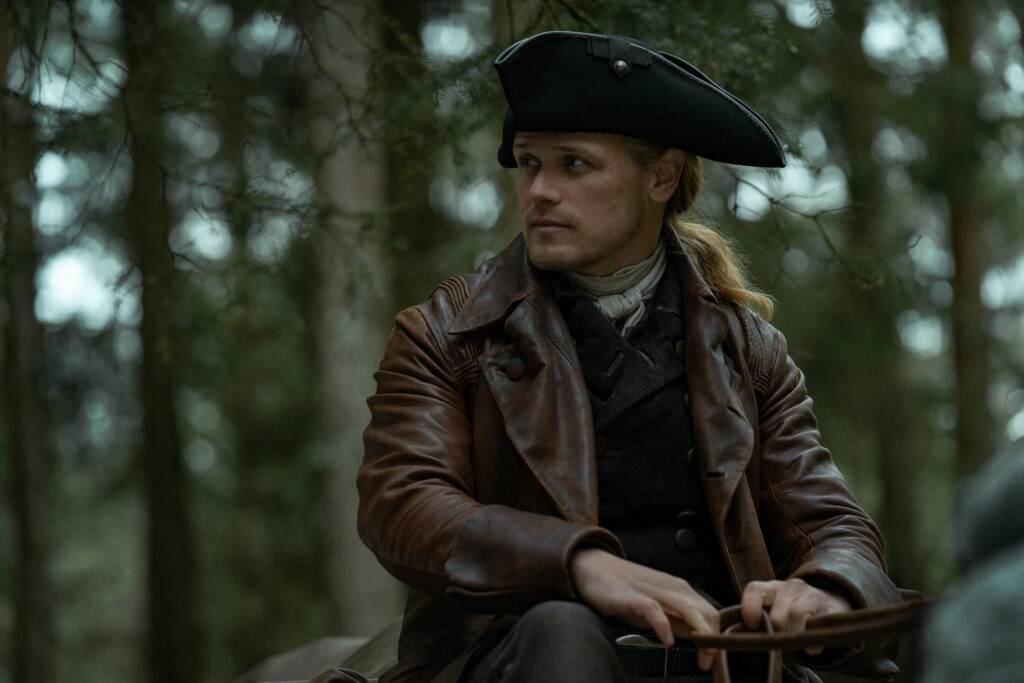 Unfortunately, this is the last light-hearted moment we get for a while. Brace yourselves! Jamie, Ian, Brianna (Sophie Skelton), and a few other settlers test out the British’s guns for the Cherokee. Naturally, the cat hater Major McDonald (Robin Laing) has to obnoxiously comment that the Cherokee should just pick good Christian names because he can’t bother to learn how to pronounce the Cherokee tribe Chief’s real name correctly.

Ian snakily retorts, “Like Donald, son of Donald? Major McDonald probably had to look for sunlight after that because Ian was throwing an excellent serving of SHADE.

Meanwhile, Brianna puts her rifle down before she shoots Major McDonald herself. Jamie asks her what’s wrong, and Brianna tells her father about the Trail of Tears. Brianna finds it extremely difficult to wrestle with the fact that she knows 8,000 Cherokee will die, and it made sense that she’d want to tell Jamie.

MEANWHILE AGAIN, Ian is triggered when he visits the Cherokee tribe with Jamie to deliver the guns from the British. “Hello, Wolf’s Brother.” And with that, KAHEROTON (Braeden Clarke) is BACK.

There’s tension between Ian and Kaheroton. Ian fills in the gaps to Jamie. He fell in love with his Mohawk wife, Wahionhaweh (Morgan Holmstrom), who Ian refers to as Emily.

I loved that Wahionhaweh confidently stated around the fire, “My husband tells better stories when he’s drunk!” Ian obviously has fallen completely and utterly in love with his beautiful wife. While it’s fun watching Jamie and Claire’s spicy times, it almost felt like intruding on something private when Ian and Wakyo’teyehsnonhsa were being intimate. (Was it just me??)

“You are my home. Both of you.” Oh my GOD, Ian would be such a loving, doting dad. Watching him discover the pregnant Wahionhaweh drenched in blood was utterly heart-breaking. Once again, one of our main characters is helpless to do anything to change the course of events unfolding in front of them. 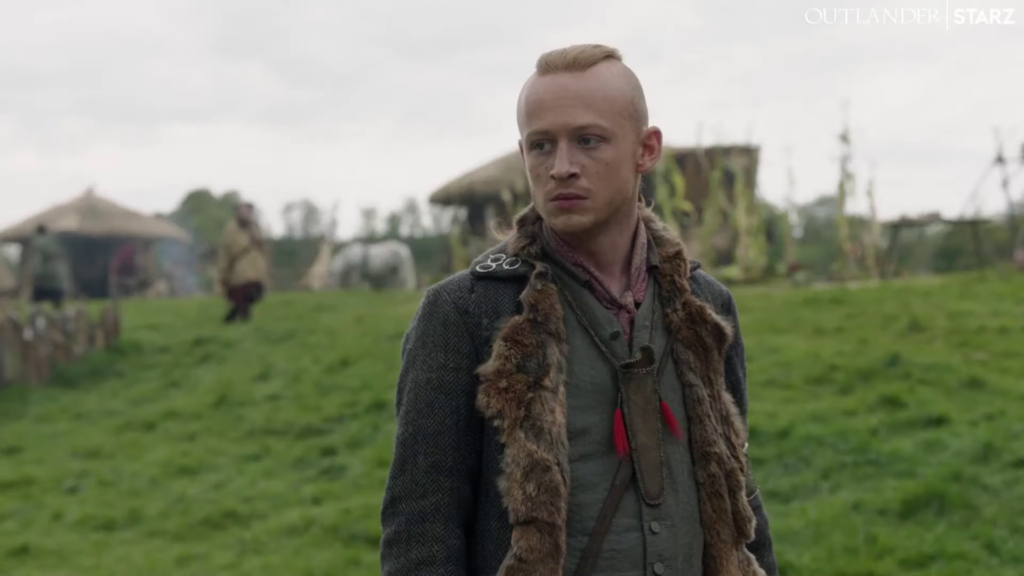 Someone give this man a hug, please.

Ian jokes, “I was good at that part,” after he explains that Wahionhaweh became pregnant again after the loss of their first child.

Sadly, she loses the child again.

At this point, a Mohawk woman leads Ian away from the tribe. She explains to Ian that the Mohawk believe that when a woman conceives, the man’s spirit must overcome the women’s spirit strength-wise for the baby to be born healthy. Ian, she explains, might’ve been made a Mohawk, but he doesn’t have a strong enough Mohawk spirit to give his wife a healthy child.

Ian is kicked out of the Mohawk tribe, explaining why he was so depressed when he reencountered Jamie in season five.

To add insult to INJURY, the Mohawk woman that was firing Ian from the tribe tells him that Wahionhaweh agrees that Ian should leave. OUCH.

Ian understandably wants to talk to his wife about this and hear her say it. He walks into a tent and finds Wahionhaweh…with KAHEROTON. 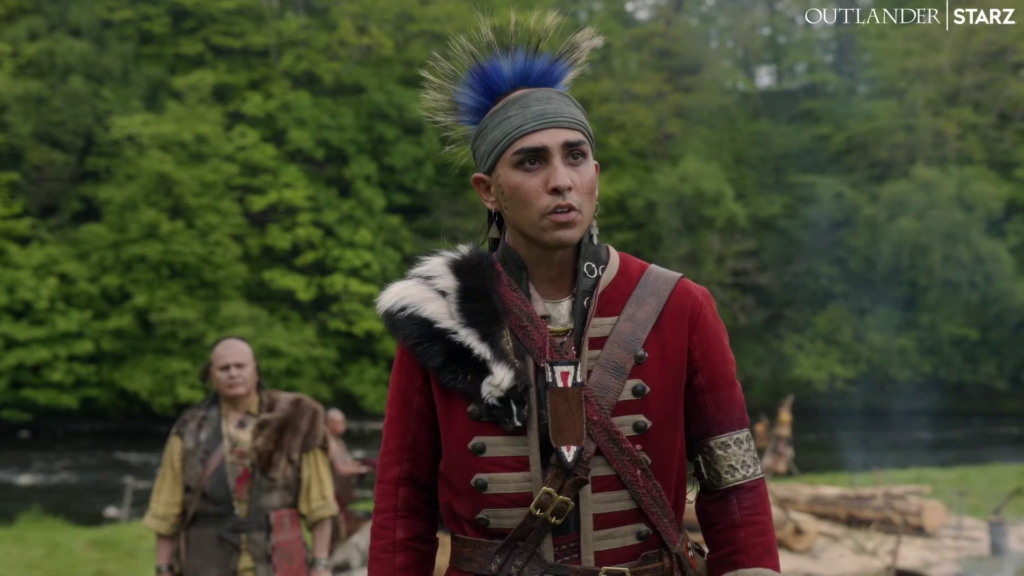 However, Wahionhaweh herself tells Ian to leave. That’s what Ian needed to hear to know he had to stop fighting. Ian felt immensely betrayed by Kaheroton, thinking they were like brothers.

Back in the present day, Jamie meets with another Indian agent Alexander Cameron (Michael Geary), who eagerly helps himself to some of Jamie’s whiskey. Not only is Alexander a drunkard, but he’s buying land from the Cherokee that he legally can’t own because of TREATIES.

Meanwhile, back at Dr. Claire’s office, Malva (Jessica Reynolds) learns the fine art of ether anesthesiology. Lizzie (Caitlin O’Ryan) is jealous when Malva says kind words to one of the Beardsley brothers (I lose track of these two seriously.)

What’s going on with Lizzie and the Beardsleys? Is this a Harry, Ron, and Hermione friend trio or something else? It seems like Lizzie is always with the brothers, and I HAVE NO IDEA WHY.

Oh, wait, back to Claire’s colonial anesthesiology lesson. She teaches Malva how to administer the ether mask on Lizzie, who falls asleep immediately. It’s not that I don’t trust Claire’s medical skills, but did this scene make me a bit nervous! 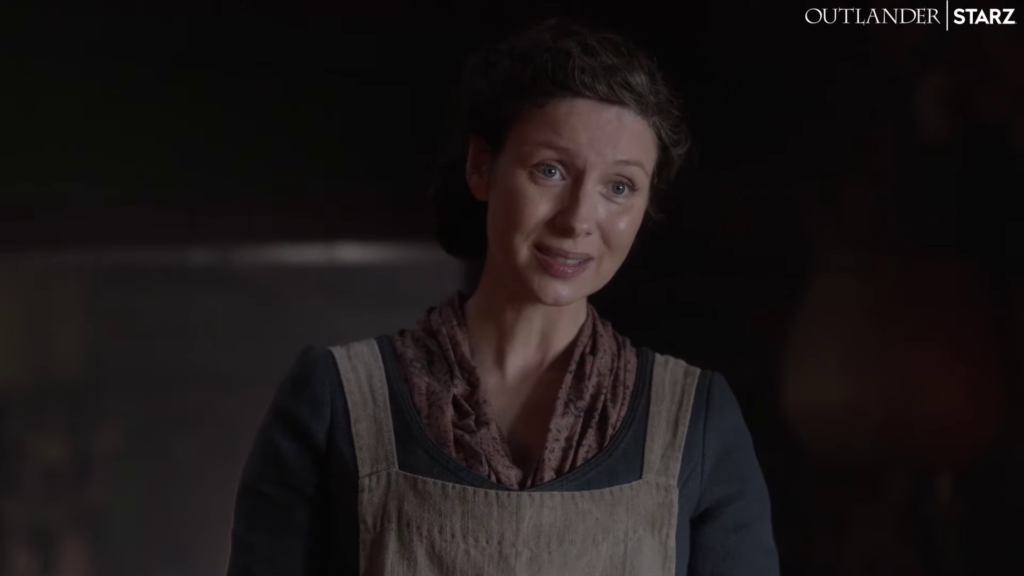 Can you imagine the loving captions Jamie would write about Claire on Instagram?

Thankfully the experiments are a success. However, Malva is like, “Hoo boy, call me a sinner because we just danced with the devil.” She acts like she’s in her “I want to rebel against everything my father says” phase, but Jessica plays Malva with a disconcerting edge that makes me uncomfortable. There’s just a weird vibe she gives off, MORE ON THIS LATER.

Meanwhile, Ian LOSES it when he finds out Wahionhaweh had a son with Kaheroton. (Where’s that ether when you need it? Just kidding, kids, don’t do drugs that aren’t administered by a licensed medical professional!)

Ian and Kaheroton are pulled apart by Jamie and Alexander. However, Alexander takes a bit too much joy in kicking Kaheroton around. Kaheroton tries to strike Alexander, who whips out his pistol and challenges Kaheroton to a duel (look how well that worked out for Hamilton.) 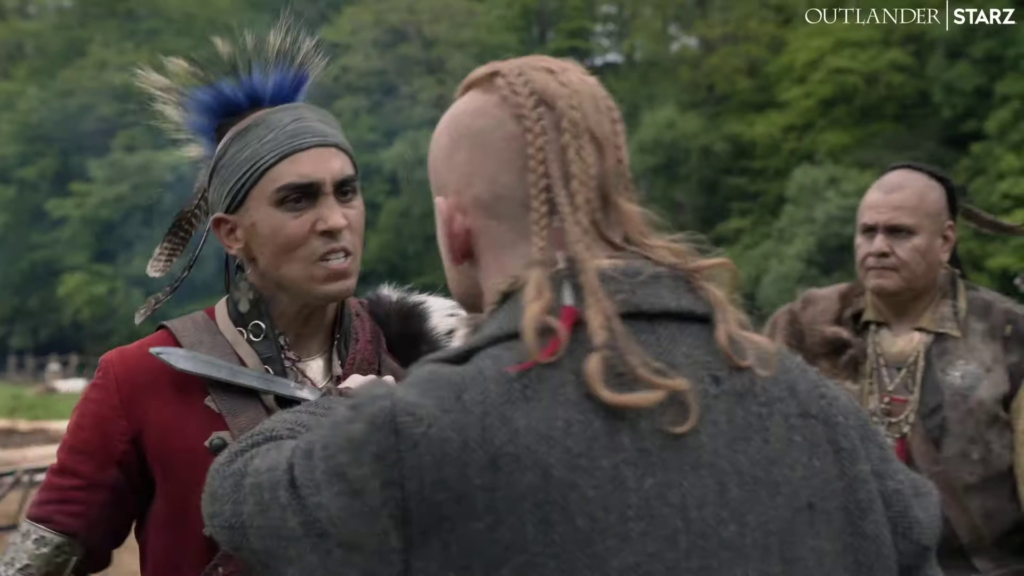 Kaheroton agrees to the duel. Ian struggles with himself, wondering why God punished him by taking away his two unborn children. Jamie goes into full father mode and tells Ian that God doesn’t punish. He has Ian pray with him and says he believes his daughter Faith will look for Ian’s daughter in heaven, and why is it raining on my face? Oh my gosh.

Ian offers his pistol to Kaheroton, and he tells him he deserves a fighting chance. Kaheroton asks Ian to look over Wahionhaweh if he dies in the duel. There’s newfound respect between these two men, demonstrating how mature Ian has truly become.

MEANWHILE, YET AGAIN, Jamie decides to tell the Chief Bird Who Sings in the Morning (Glen Gould) about the Trail of Tears. It makes sense that Jamie disclosed this information to the Chief, knowing that he wouldn’t take him for a madman. Chief Bird Who Sings in the Morning asks Jamie if he paid a great deal for his wife, thinking she must’ve been valuable if she has the gift of prophecy.

“She cost me almost everything I had…But she was worth it.”

I loved how Jame & Claire’s theme played as Jamie said this. What a FANTASTIC line.

During the duel, Alexander attempts to cheat and fire at Kaheroton one count early. Ian saves Kaheroton’s life by knocking Alexander’s pistol out of his hand. Kaheroton had the right to fire back, but he wisely chose to fire in the air, punishing Alexander with the knowledge that he begged him not to shoot like a coward. 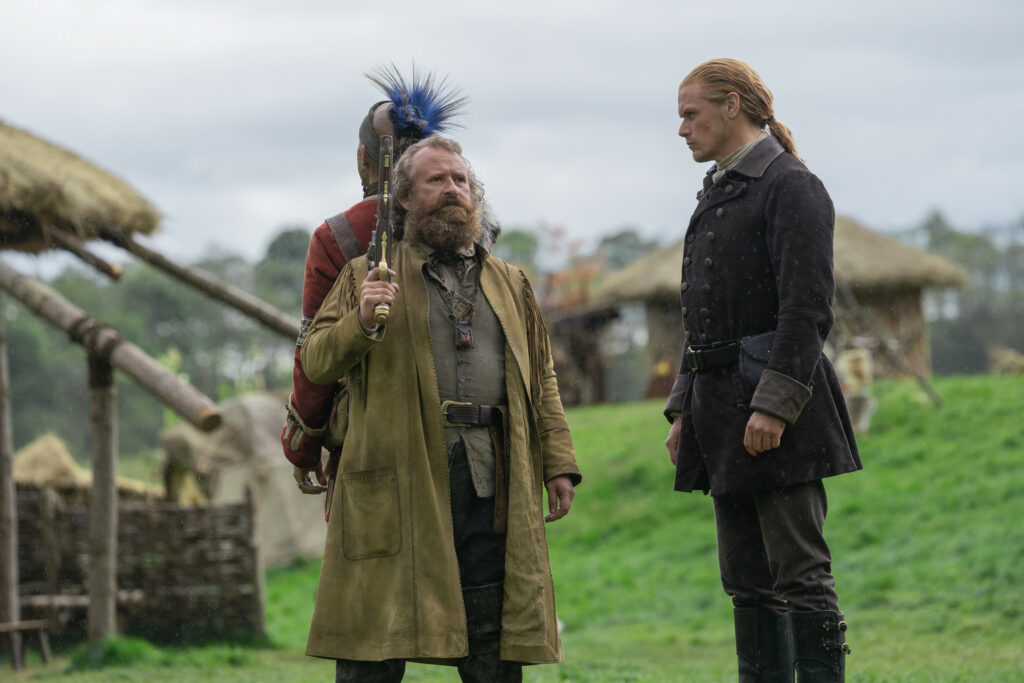 He’s that friend that constantly challenges better men to duels at the bar after too much whisky.

I loved the development in this episode between Kaheroton and Ian. PHENOMENAL. The two don’t exactly part as besties, but they’ve earned each other’s respect, man to man.

And okay, OKAY, MALVA, WHAT ARE YOU DOING.

Okay, is this the show’s way of poking fun at all of us fans enjoying Claire and Jamie’s spicy times? IS THIS PLAY ABOUT US? No, but seriously, seeing Malva stand on her tippy toes to get a glimpse of Jamie and Claire doing it WAS ONCE AGAIN, HIGHLY DISCONCERTING.

I have no idea what’s going to happen next. I love it.

Worst Character So Far: Alexander Cameron for being able to dish it out but cowering when he almost had to take it.

Honorable Mention for Assholery: Tom Christie, because Malva clearly is curious about the world and spicy times, but he’s not going to tell her ANYTHING.

Synopsis: Claire and Jamie experience the rising tensions in the colonies first-hand when they attend a Loyalist event in Wilmington in honor of the Scottish heroine, Flora MacDonald.