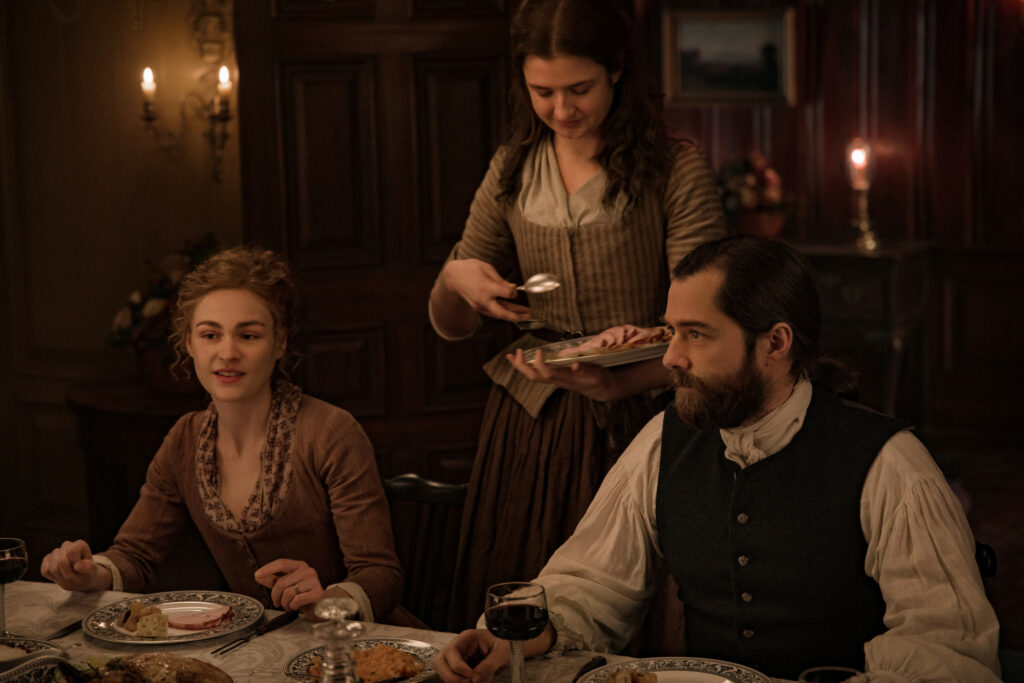 Guns, Cats, Witchcraft Accusations, and the Threat of Impending Revolution: AKA Outlander!

Everything just feels a bit safer when a cute cat is involved. (Says the writer, whose nickname is Kat, but also happens to be allergic to cats. The irony does not escape me.) 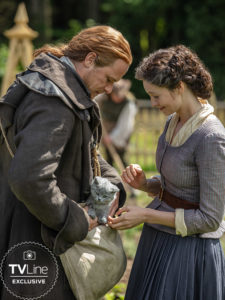 (The real star of Outlander is back!)

Episode 602 of Outlander season six was a doozy in the best possible way. We had Jamie (Sam Heughan) trying to negotiate with a Cherokee tribe. The Cherokee chief explains to Jamie that he’d like Jamie to ask King George III for guns on his tribe’s behalf. The tribe wants to protect their lands from those with no respect for boundaries.

“Our war is with those who crossed the treaty line.”

Ever the diplomat, Jamie says he’ll consider it, but he will not guarantee anything. As Claire (Caitriona Balfe) mentions later, thank HEAVEN Jamie was the Indian agent and not Mr. Brown. Jamie treats the Cherokee tribe with respect. However, Jamie hesitates on the gun issue because he doesn’t know who the Cherokee will align with in the upcoming war: the Americans or the British?

And suddenly, I questioned whether or not I actually learned a thing with my college degree because, just like Claire and Brianna, I also couldn’t answer Jamie’s question about who the Cherokee sided with. I didn’t MAJOR IN HISTORY, don’t JUDGE ME.

While I may not have a history degree, I do know how to use Google. According to the official Mount Vernon website, the Cherokee were on cordial terms with George Washington…after the war was over. HOWEVER.

BEFORE/DURING the war, well, let me show you what the site says because I don’t have a history degree: “King George III issued a proclamation in 1763 prohibiting European settlement west of the Blue Ridge Mountains into Cherokee land. Although this law was widely ignored, the effort—along with the Cherokee’s history of alliance with the British—likely contributed to the tribe’s decision to side with British forces during the Revolutionary War.” 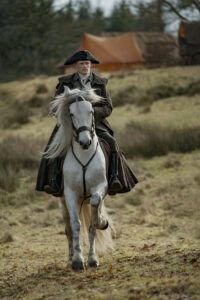 (Jamie on his way to call Claire “Sassenach”)

So THERE YOU HAVE IT.

Later that night, Jamie is woken by a woman’s hand caressing his chest. GET YOUR HANDS OFF CLAIRE’S MAN, YOU RANDOM, TOPLESS WOMAN.

It’s always fun to see Sam get to sharpen his comedic skills. He compliments the TWO topless women ready to jump his hot Scot bones, telling them that they’re lovely ladies, but he’s spoken for. Jamie asks Young Ian(John Bell) to translate that he doesn’t want to jump their bones in return, but Young Ian tells the two ladies something completely different, resulting in more hilarity. Young Ian is clearly getting a huge kick out of seeing his normally tough, stoic uncle so frazzled. 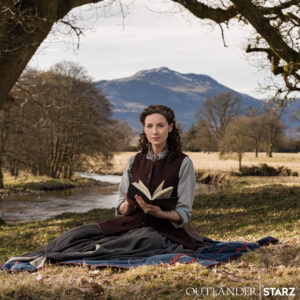 Jamie returns home to Claire, and he’s like, “Hey, we haven’t filled our one hot scene per episode quota yet. Wanna fix that with me, Sassenach?”

Okay, that’s not exactly what Jamie said, but he comes home and wants Claire immediately. Claire is game because this is Outlander and these two are the hottest sixty-something-year-olds in existence. (Seriously, the funniest line in this episode was Jamie calling himself an old man when they barely added any grey hairs to his wig.)

He tells Claire about his concern with the Cherokee’s request. Claire isn’t able to recall who the Cherokee sided with. (ME EITHER, CLAIRE, DON’T WORRY YOU’RE NOT ALONE).

They’re about to get down and dirty Fraser’s Ridge style once again when they’re colonial cock-blocked by that Major MacDonald (Robin Laing) guy. It turns out MacDonald is also terribly allergic to cats, but this is 17th century America, and there’s not a Benadryl in sight. 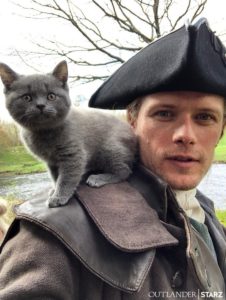 (Seriously, how could you hate Adso?)

IT’S THAT ATTITUDE THAT LOST YOU THE COLONIES, SIR. NO APPRECIATION FOR CUTE CATS.

Jamie, clearly disgusted by MacDonald’s lack of Adso appreciation, completely forgets to ask about the Cherokee request for guns (Okay, no, he purposely chose not to ask). This subject will come up again later. 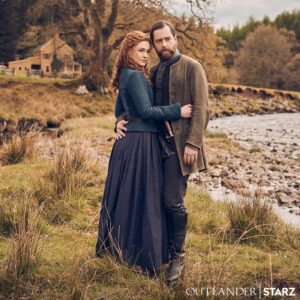 (The couple that blazes together stays together, am I, right?)

Brianna is playing with fire, literally. She thought it would be wise to create matches. Roger tells her he’s been asked to eulogize the dead Mrs. Wilson (I think that’s what her name was?) The settlers had been building a church on Fraser’s Ridge, so what better way to get things going than with a funeral, am I right?

I guess Roger’s eulogy really did raise everyone’s spirits because MRS. WILSON LITERALLY WAKES UP IN THE MIDDLE OF IT. Claire jumps into doctor mode and realizes to her horror that Mrs. Wilson is still technically on her deathbed, and she’s been bleeding internally from an aneurysm and has minutes to live.

It was hilarious how Mrs. Wilson went into full colonial-settler Karen-mode about her funeral like the woman was one second away from complaining about it to a manager. To be fair, though, waking up at your own funeral only to be told you’re still about to die would be extremely traumatizing. 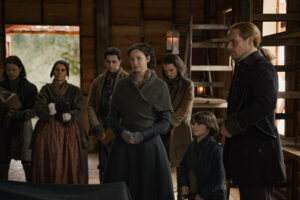 (Quite the lively funeral, wasn’t it?)

Meanwhile, Marsali (Lauren Lyle) interrupts the Fraser family dinner with pregnancy pains. Claire immediately goes into doctor mode again and fears she may have to perform a c-section. It’s always painful to see Claire grapple with the reality of dealing with surgeries that wouldn’t be deadly in the modern-day but would likely be fatal in 17th century America.

If she does perform a c-section, Marsali would die, and Marsali is not dumb. She jokingly asks Adso to make sure Claire doesn’t perform an autopsy on her.

Jamie sends Roger to fetch Fergus (César Domboy), who is drunk once again. Marsali had told Claire earlier that Fergus was struggling with guilt over what happened to her and Claire last season. (Still no excuse to be an abusive asshole Fergus, but I DIGRESS.)

Roger calls Fergus OUT. This scene has to be one of my top five Roger moments. He tells Fergus to pretend to be a man, even if he doesn’t feel like it. Roger wisely predicts that Fergus won’t have to pretend once he sees Marsali. 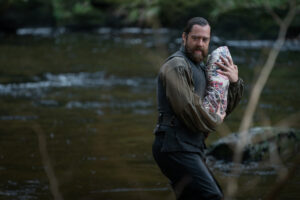 He’s right. For a glorious moment, it seems like the old, sweet Fergus is back when he arrives to be at Marsali’s side. Fergus happily explains that while he was living at the brothel, he learned that massaging a woman’s breasts helped ease pregnancy pains. It’s a very intimate moment between the couple, and Claire astutely leaves the room.

This episode was chock full of hilarity, particularly at the moment when Claire, Jamie, Brianna Roger, and Malva (Jessica Reynolds) can hear Fergus and Marsali increasing the show’s sexy episode scenes to two in the next room. Everyone’s like, “Well, I’m out,” but Claire stays behind because she is a DOCTOR, and she needs to deliver Marsali’s baby once she’s done having sexytimes with her French hubby! 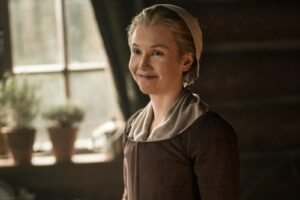 (Treat this woman RIGHT, Fergus, for the love of…)

Marsali does give birth to a healthy baby, who she names Henri Christian. Unfortunately, Fergus immediately goes back to angry, depressed Fergus when he sees that Henri is a dwarf. As Claire notes, Henri is perfectly healthy and beautiful, just like his momma!

MEANWHILE (I loved how much was going on in this episode), Brianna is bummed that nobody cared about the fact that she created her own matches. Do people only think she’s interesting when she’s pregnant? Apparently, she and Roger have been trying to have another baby, but Brianna hasn’t been able to get pregnant yet.

MEANWHILE AGAIN, before Brianna and Roger talk babies, Brianna tells Young Ian about the future fate of his Native American brethren. Young Ian is heartbroken to learn about what happens to them and becomes more determined than ever to help them, just like they helped him in the past.

MEANWHILE, PART THREE, Jamie gently tells Tom Christie (Mark Lewis Jones) to convert the church that’s being built into a Freemason’s lodge, where anyone of any religious affiliation can enter. Jamie also gently warns Tom if anyone accuses Claire of witchcraft again, he’ll…Well, we all get the picture.

Tom turns out to be a total asshole to Malva and tries to whip her for not having fresh milk for him. (I knew this man was off his rocker.) In a remarkable case of “Karma is a b***” Tom cannot punish Malva because he can’t hold the whip in his bad hand. Malva just gives him sass by looking at him. I can’t help but feel pity for Malva. It’s not her fault that she was raised by an abusive, milk-loving religious zealot of a father. I hope Claire can help Malva more, so she can find out what kind of woman she really is. 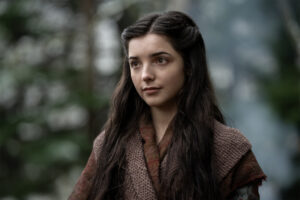 Please feel free to throw this paragraph back in my face if I’m completely wrong about Malva, OKAY? Malva is giving off slightly creepy vibes, but I think it’s just because she’s never had the freedom to actually develop her own personality?

Jamie decides to ask the King for guns for the Cherokee on behalf of Young Ian. We’re rolling up to the Revolutionary War y’all!

If you excuse me, I’ll be dumping tea into a harbor in the name of freedom. Before I do that, though, I’m giving this episode 4.5 out of 5 whiskey drams.

Worst Character So Far: I was going to say Tom Christie, but I will have to vote for Major MacDonald for hating cats.

Honorable Mention for Assholery: Tom Christie, for not taking care of the milk himself if he wanted some so much.

Synopsis: Fergus worries for his new son’s quality of life when the baby is bullied by superstitious Protestants. Claire performs surgery on Tom’s hand.