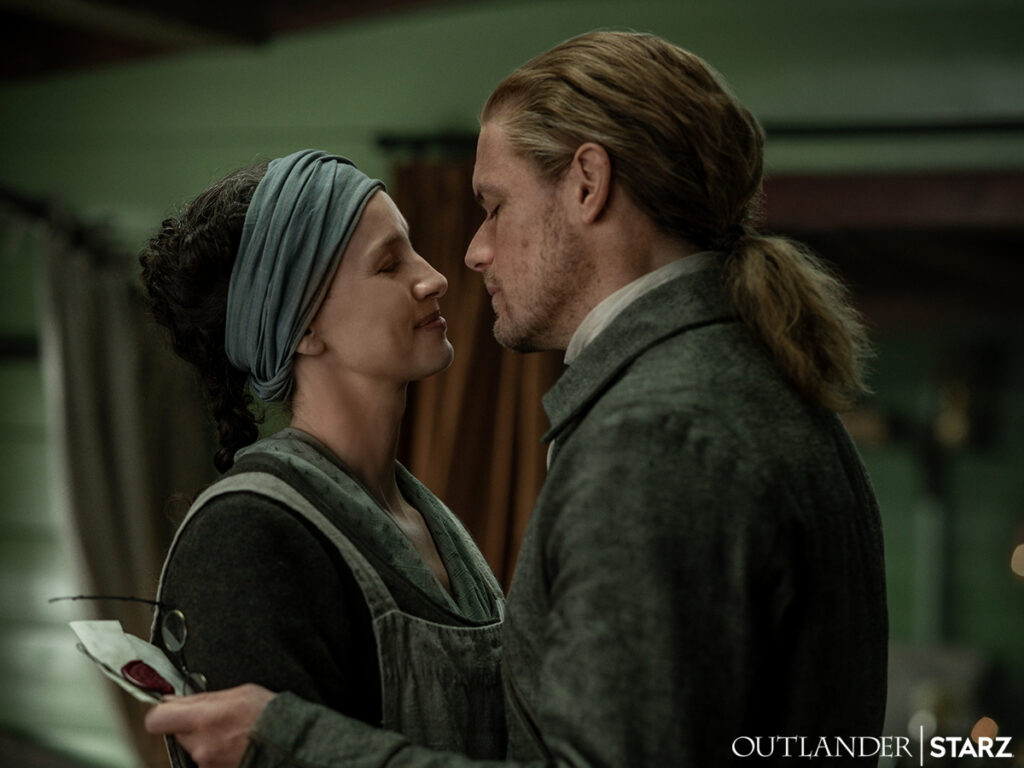 Outlander is Back, and I Am Weeping Into My Whisky

Written by Matthew B. Roberts, Directed by Kate Cheeseman

Seriously, someone get Fergus (César Domboy) a colonial therapist ASAP. That man should NOT be in charge of the Fraser distillery.

Oh hey, welcome back to Outlander, everyone. It’s been far too long, hasn’t it? Episode 601 is called “Echoes.” The only thing that I’d like to echo repeatedly through this review is that I get SERIOUSLY weird vibes from the Christies. Also that Fergus needs a therapist. (Yes, I realize therapists were not a thing in 17th century America! But this is a free country, and I CAN WRITE WHAT I WANT Y’ALL.)

Okay, back to the Christies. They’re the newbies on the Fraser’s Ridge block. In my humble opinion, the Ardsmuir prison flashback (that went on a bit too long, but WHAT DO I KNOW) establishes that Tom Christie (Mark Lewis Jones) and Jamie (Sam Heughan) have ALWAYS been frenemies. The episode makes it clear that Tom is a dedicated Protestant. The imprisoned Scots at Ardsmuir split into two factions. Tom’s Protestant faction and Jamie’s Catholic one. 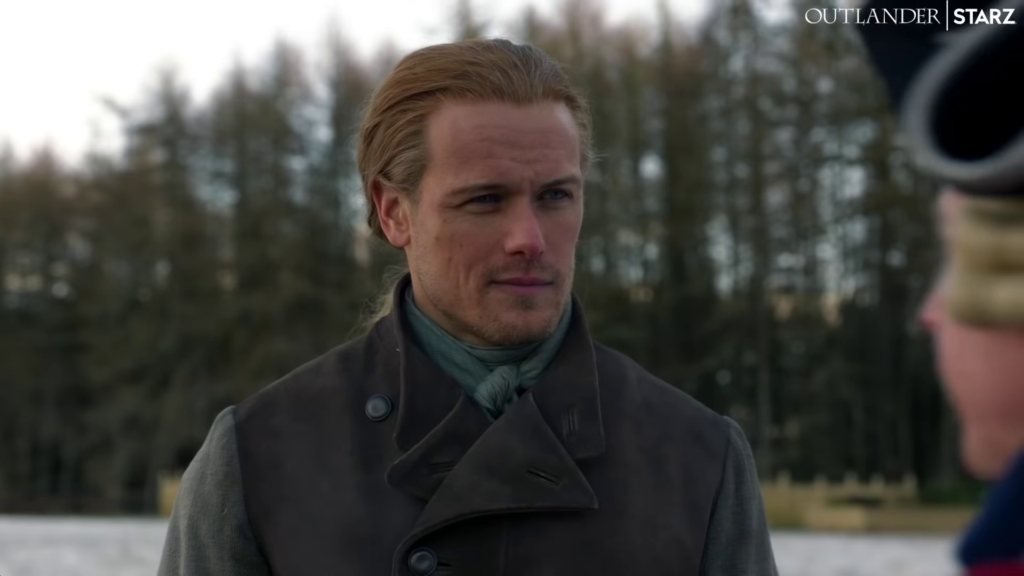 (Jamie has his hands full this episode.)

Jamie astutely realizes that the great Scot split of Ardsmuir Prison isn’t helping his people out at all. He suggests they all become Freemasons in an effort to unite his countrymen. In a way, Jamie is inspired by his fellow prisoner, a man who shook Jamie’s heart when he was looking for a lock of hair from his love Rebecca.

The man never found the lock of hair and had the misfortune of being killed in the skirmish between the Scottish prisoner factions. Another prisoner lays a piece of tartan on the poor man’s corpse, and then the British redcoats decide to be total ASSHOLES about it and remind the Scots that TARTAN is outlawed (just wait until all of your tea gets dumped into a harbor, you BASTARDS.)

Jamie exudes “I’m the main character and manly AF” energy when he takes responsibility for the illegal piece of cloth (seriously, they outlawed TARTAN.) He’s punished with a painful lashing as a result. When Tom sees Jamie’s scars from his previous lashing from Black Jack Randall (Tobias Menzies, COME BACK but as Frank please), he uses it as a verbal lash against Jamie when they clash again on Fraser’s Ridge. (Tom insinuates that Jamie must’ve earned those scars because he acted dishonorably.) 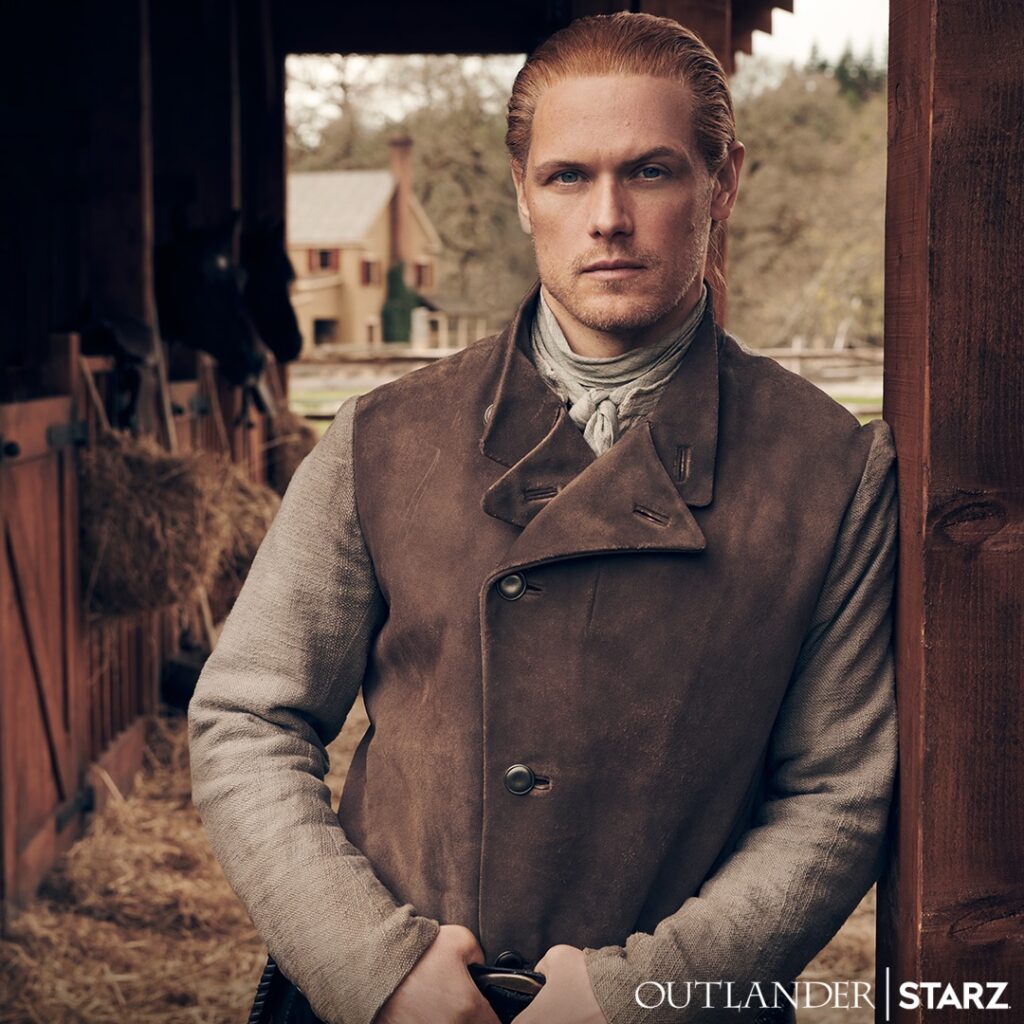 I’m getting tired of writing about that Christie guy (he’s totally going to be a problem this season, isn’t he?) Let’s check in with Claire (Caitriona Balfe)!

Have you ever panicked seeing a loved one in a deep sleep and woken them, anxious that they were dead? I could sense Jamie’s deep dread when he came across sleeping beauty Claire, who was thankfully not dead, just experimenting with rudimentary anesthesia on HERSELF. 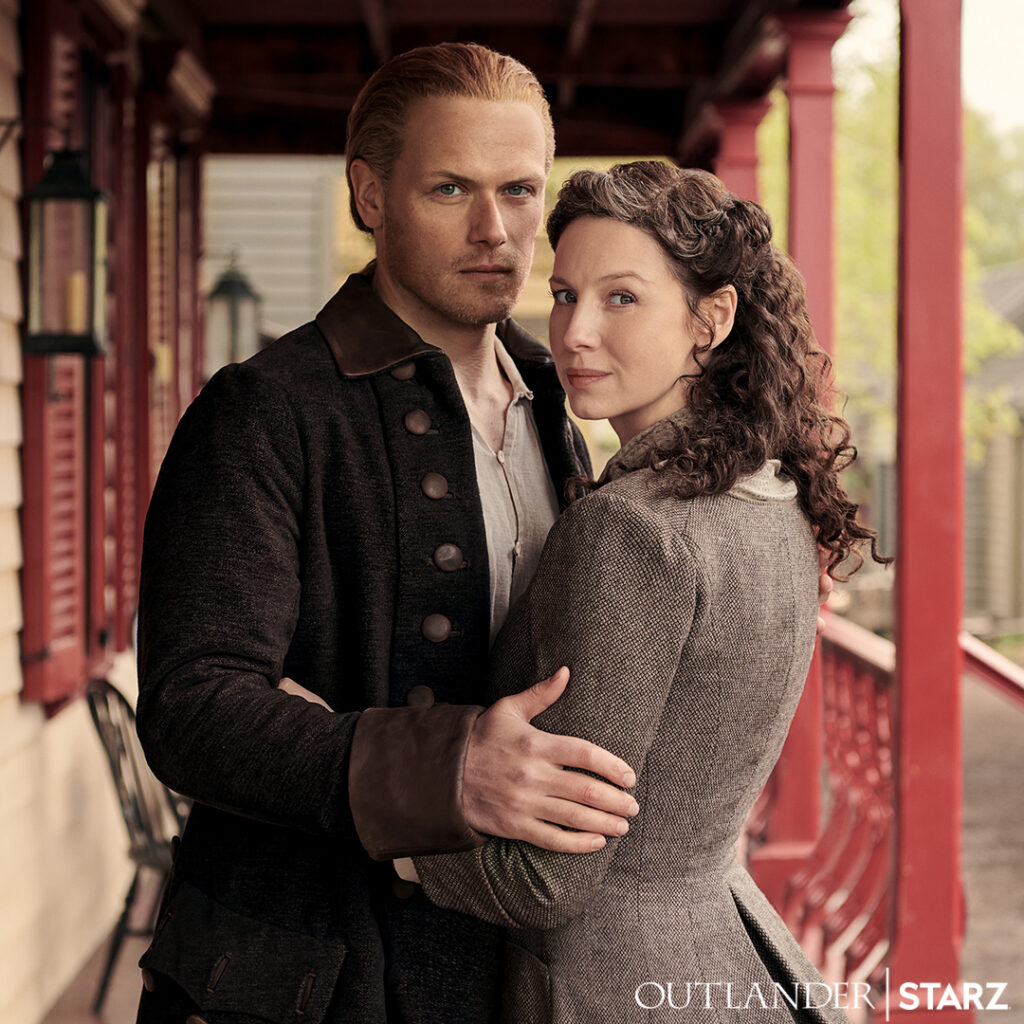 Claire explains to Jamie that her ether could help patients when whisky just won’t cut it. I love that she teased Jamie about accompanying her to every house call. (I mean, can you blame the man after what happened last season?)

Claire’s going to check on Marsali (Lauren Lyle), who is heavily pregnant and ready to pop. Marsali is as proud and strong as ever, but even she can’t hide the HUGE BRUISE on her wrist from Claire’s watchful eye.

I don’t like this. Marsali immediately makes an excuse about the bruise, but Claire isn’t stupid, and NEITHER AM I. FERGUS OBVIOUSLY DID IT. 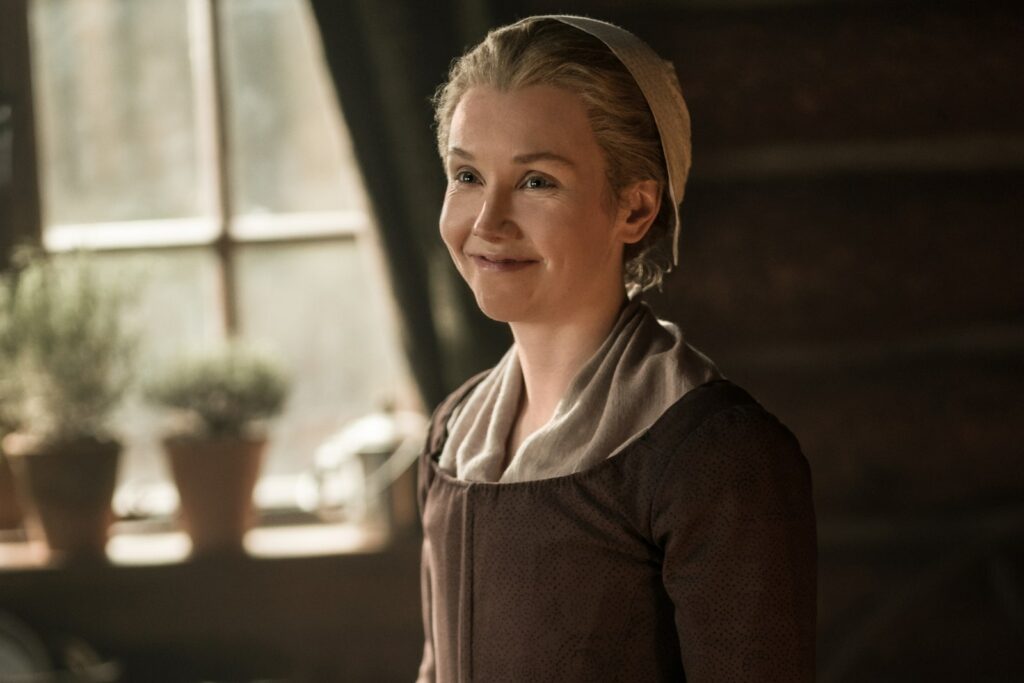 Seriously, what’s going on with Fergus? I can understand if he struggles with feelings of inadequacy but to harm Marsali? I don’t like that at all. She even has to try to sober up Fergus near the end of the episode, and he’s like, “I’M FINE. WHY ARE YOU TRYING TO FORCE-FEED ME BREAD?”

I also get that Marsali is not a modern woman, so her notions of spousal abuse are, “I am a wife, and I need to deal with it.” I hope Claire figures out what’s going on so she and Jamie can help Marsali and Fergus.

On a lighter note, Roger (Richard Rankin) has a HUGE BEARD? It’s great. He jokes about what a shame it’ll be when all of the tea gets dumped into the Boston harbor. Brianna (Sophie Skelton) jokes about what side Roger’s actually on. 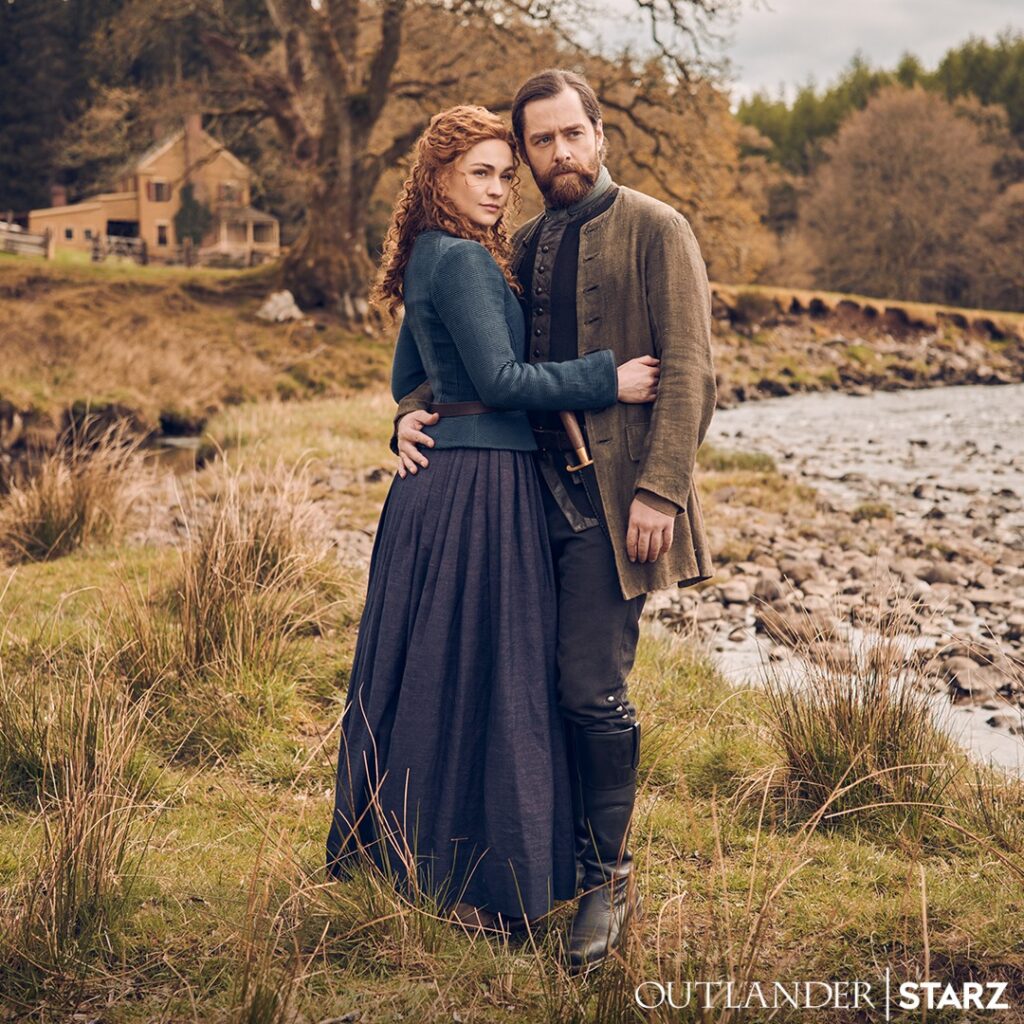 The Roger/Brianna dynamic in this episode was sweet, trusting, and loving, and it was a nice balance to all of the DARKNESS occurring elsewhere. Unfortunately, poor Roger makes a colossal mistake, and he agrees to let Tom Christie settle at Frasers Ridge, unaware of his AWKWARD FRENEMY HISTORY with his father-in-law Jamie.

Did anyone else crack up at Jamie’s face when he realized what Roger had done? The man looked like he was seriously contemplating son-in-law-cide.

Thankfully Roger escaped from the awkwardness unscathed. Jamie realizes he has no choice but to let Tom and his settlers join Frasers Ridge. He can’t accept other Scottish prisoners from Ardsmuir and exclude Tom.

Tom thanks him by holding an unofficial Protestant sermon. Jamie crashes Tom’s religious gathering, and Tom is like, “We were just giving THANKS for this tasty bread, you red-haired devil.”

Meanwhile, we’ve also had the pleasure of meeting Allan Christie (Alexander Vlahos) and Malva Christie (Jessica Reynolds). Please feel free to roast me if I’m wrong about these two, but they don’t seem as off-putting as their father? Yes, Allan stole a powderhorn, but does that warrant eternal damnation? 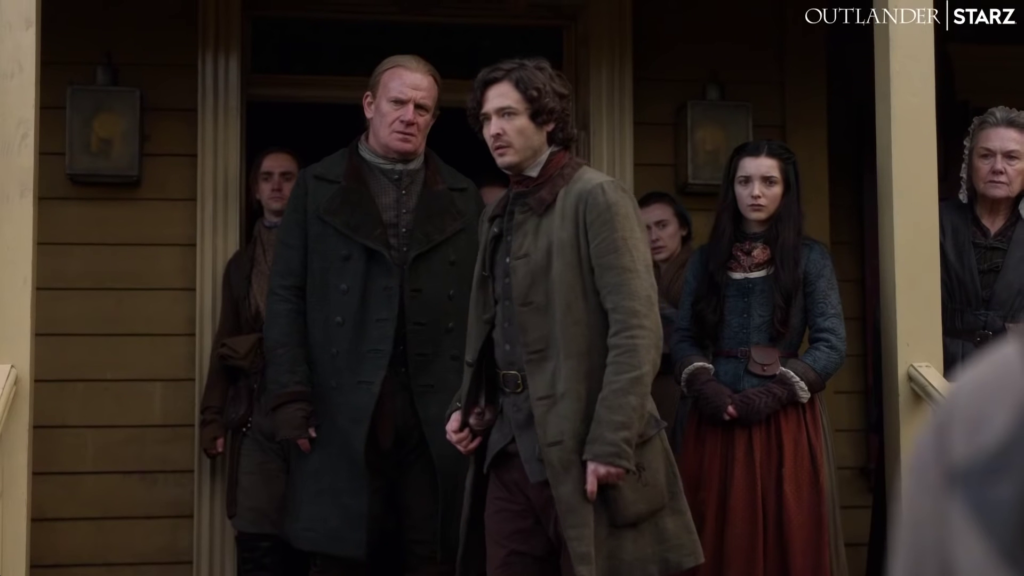 (Tom is about to throw his son into the fiery pits of hell.)

Richard Brown (Chris Larkin) and his vigilante justice group nearly SHOOT Young Ian (John Bell), and could I hate THEM ANY MORE? Young Ian had asked Allan about the powder horn, and Allan lied and said he was the one who crafted the carvings on the powder horn.

Brown and his stupid gang of cronies are the ones that crash the delicious dinner that Mrs. Bug (Sarah Collier) has prepped near the episode’s end. They know Allan stole the powder horn and declare that they’ve come to arrest him.

Tom pulls Allan aside and asks him something that I’m sure will come to light later. “Do you want to end up like your mother?” WHAT HAPPENED TO MRS. CHRISTIE Y’ALL? 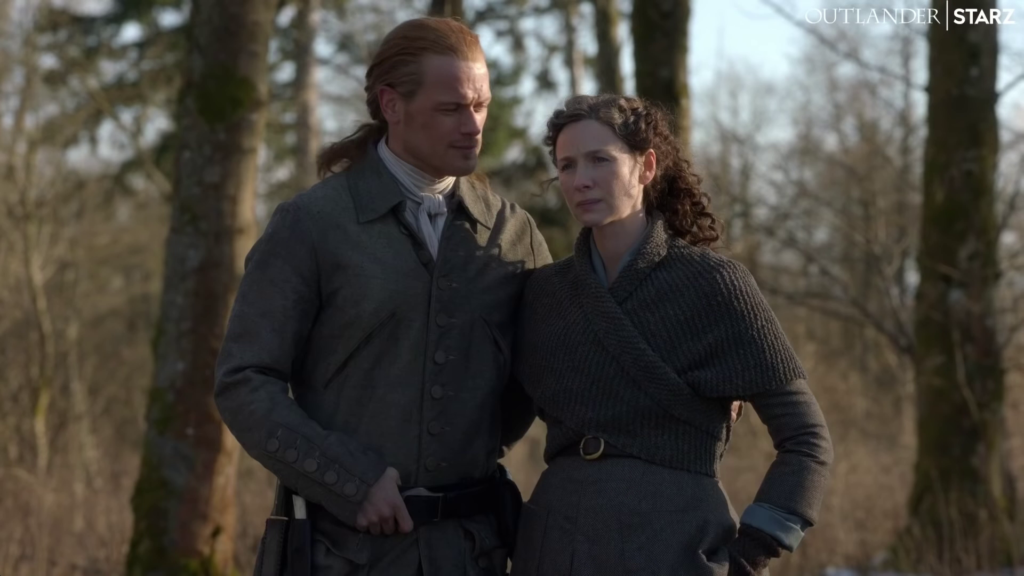 (We need more of these two, please.)

Jamie is forced to administer ten lashes to Allan. Honestly, Allan should be thanking his lucky stars. Jamie rescued him from wherever Richard would’ve taken him.

Claire insisted that she was FINE earlier in the episode when Brianna asked her. Brianna sweetly reminds her that she also stubbornly insisted she was FINE too after being raped.

Claire is clearly not FINE because nightmares plague her after the incident with Richard Brown. She concocts some ether for herself in order to get some rest. Seriously, do colonial therapists make house calls? 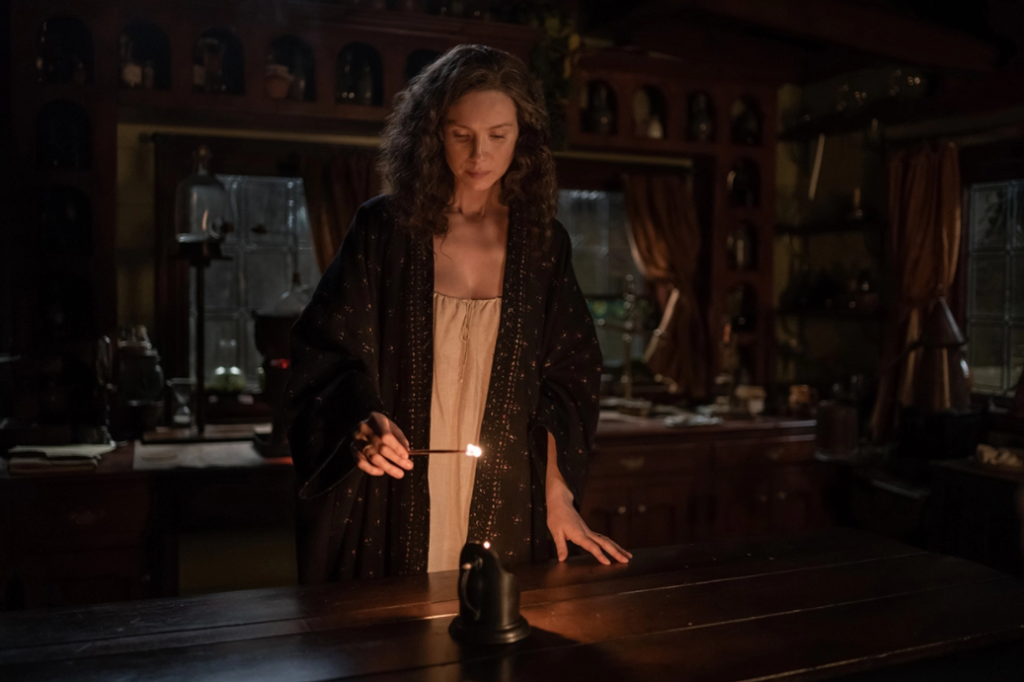 (Another angel of Outlander)

I’m delighted Outlander is back, but this episode was heavier than everyone’s collective trauma. I rate this episode 4 out of 5 whiskey drams.

What did you think of the episode? Until next time Outlander fans!