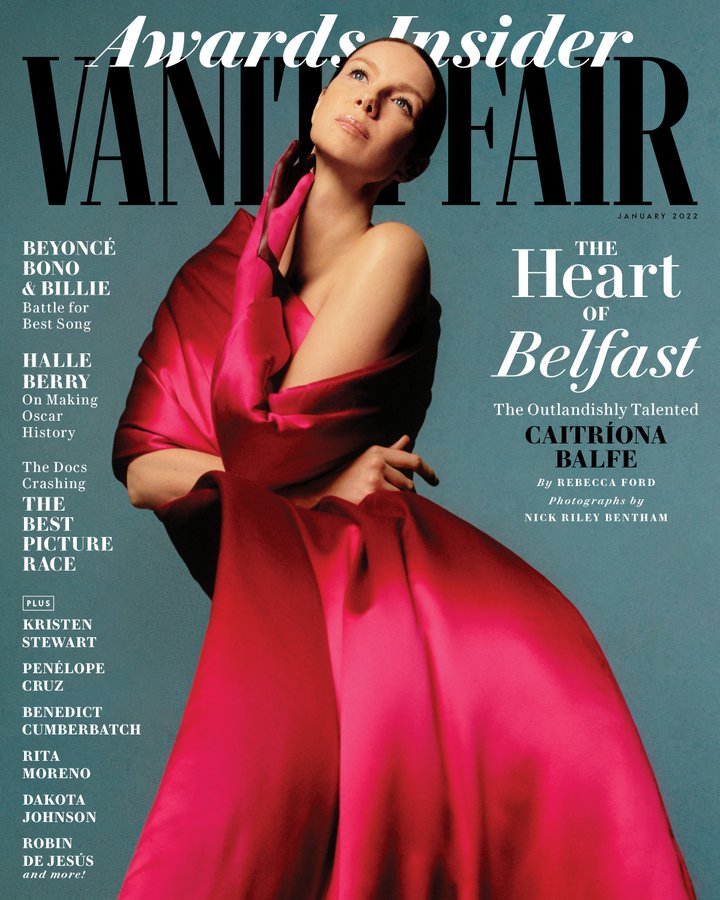 Caitriona Balfe has the honor of being on the cover of the latest issue of Vanity Fair.  Along with some fabulous photos and talking her latest film, Belfast, Caitriona also chats about Outlander.  She is fairly candid in this interview, discussing some of the challenges of portraying Claire.  She also points out some of the shortcomings of the Outlander production in its first season.  There have been encounters with vicious fans who don’t live in reality, and as we shared on our social media, they are a disgusting element to this fandom.  Caitriona has stated before that she would love the chance to direct, but it appears that she has not been given the chance to do so yet on the show for season seven (hint, hint Starz).  Below are relevant quotes from the Vanity Fair piece, but please head over to Vanity Fair to read it in its entirety (and all the pretty photos).

Balfe’s conviction began to falter and she considered giving up on acting. When the casting call came along for Outlander, “it was another self-tape among hundreds,” she says. But in 2013 she was cast in the lead role of Claire, a former World War II nurse in Scotland who is transported back to the mid-18th century, where she’s thrown into a group of rebel Highlanders. She falls in love with one of the men, Jamie (played by Sam Heughan). “That feistiness she’s got, maybe it’s the Irishness in her—because she’s got great intelligence and great wit about her—that feistiness really works for Claire,” Heughan says of Balfe. “She’s never going to be told what to do. She’s always going to stand up for herself.”

Outlander allowed Balfe to show off her versatility in a series that requires physical strength, charm, wit, and depth, and the offers sailed in. But because shooting a season of Outlander in Scotland takes between 9 and 12 months, there’s never much time left for her to accept other opportunities. “The beauty of this show is that it’s opened a lot of doors. The tough part about it is that we don’t have any time to really take advantage of it,” says Balfe.

She has a reason to be a bit more protective, owing to a sliver of fans who are obsessed with the idea that Balfe and Heughan are romantically involved in real life. These stans have conspiracy theories, including one positing that her baby is Heughan’s because the bedsheets in the baby picture look similar to ones seen in a photo Heughan has posted. Balfe says that after she married her husband, Scottish music manager Anthony McGill, in 2019, she found out that someone had called to harass the secretary of the church where the wedding took place; they didn’t believe her marriage was real. She’s also gotten wind that private investigators have been hired to “solve” the case and prove definitively that she’s involved with Heughan.

Unlike Ma, Balfe has been at home in the outside world for more than two decades now. She mostly resides in Glasgow because of Outlander’s demanding production schedule. Balfe says she’s not sure when the series, which will shoot its seventh season later in 2022, will end, but adds, “We will have hit the almost 10-year mark by the end of that, which feels like a nice kind of time frame, but we don’t know. Those decisions are far above my pay grade.”

But it will end eventually, and then Balfe’s schedule will very much open up. She hopes to do theater and delve into other meaty film roles, but more than anything she hopes to direct. “It’s something I’ve been talking about doing on the show. It’s falling a little on deaf ears,” she says, adding that there was a plan for her to do some directing in the sixth season, but the pandemic, her starring role, and her pregnancy made the logistics of that more complicated. Clearly frustrated, Balfe says she hasn’t heard anything about directing in the upcoming seventh season but feels it’s unlikely at this point. “It would’ve been the perfect chance for me in a very safe space,” she says. “I’m so close with all of our camera crew, and they were always having conversations about what lens they’re using and what frame it is and they’re really always super helpful in giving me as much information as I want. It’s a shame, but out of my hands.”

And on the set of Belfast, she noticed something noteworthy about Branagh’s team: There were a significant number of women on the crew, something she hasn’t seen on Outlander. The disparity was so noticeable that she said around two years ago she and Heughan spoke with the show’s executives about diversifying the crew in terms of gender and race. “I think on one hand there’s sort of this idea, ‘Well, Scotland’s a very predominantly white place and it’s an industry that traditionally is much more male-skewed, so it’s tough to find these people.’ I’m not sure that’s necessarily true. I think there’s ways of finding people to bring in.”