Filming on season six of Outlander finishes this week.  The news was released this morning in a couple of tweets which proceeded to blow my mind.  Ending filming this week either meant they were filming quite fast for twelve episodes (about a month short based on my estimate) or . . . the other reason.  Season six will only be eight episodes, not twelve.  With COVID-19 restrictions, producers shortened the filming period.  On a better note, the first episode will be 90 minutes long and will premiere in early 2022.

Due to the truncated episodes, the missing episodes will be added to season seven, making that season sixteen episodes in total.  The only other season that is sixteen episodes is season one, when filming was underestimated, and the season was split into two parts.  While I think we can hopefully all agree that season one is the best of them all, it definitely took the cast and crew a long time to film.  Schedules will have to be cleared for at least eight months, maybe more.

Some unanswered questions pop into my mind with the press release today.  Will season seven only be An Echo in the Bone, or will a portion of A Breath of Snow and Ashes that will not be included in season six be added onto season seven?  Will season seven tread into Written in My Own Heart’s Blood territory?  We seem to ask a looming question every year: will this extended season seven be the last season of Outlander?

My bet’s on season seven in 2023, regardless of whether it is split into two parts or not.

Along with the press release were four new official photos from season six.  The characters included in these photos include Jamie (Sam Heughan), Claire (Caitriona Balfe), Brianna (Sophie Skelton), Roger (Richard Rankin), and a wee babe.  The data associated with these photos reveal what episodes these photos are from.

Check out the direct quotes from Matthew B. Roberts and Christina Davis, President of Starz’s Original Programming, on the news today:

“We are excited to get into the editing room to work on bringing the fans one step closer to reuniting with the family back on Fraser’s Ridge,” said Matthew B. Roberts, “Outlander” showrunner. “Filming in 2021 has presented an unprecedented set of challenges which led us to the decision to truncate the season in order to bring the fans the most vibrant and dynamic season as soon as possible. Dinna fash, we will then film an extended season seven with 16 episodes next year as life returns to normalcy.”

“We are committed to telling the story fully with gripping and bold storylines in the upcoming eight-episode season that introduces viewers to new characters including Tom, Allan and Malva Christie (Mark Lewis-Jones, Alexander Vlahos and Jessica Reynolds) who create tension on the Ridge,” said Christina Davis, President of Original Programming for STARZ. “We can’t wait for viewers to see the exciting sixth season that reflects the STARZ #TakeTheLead initiative through unapologetic storytelling and powerful female characters.” 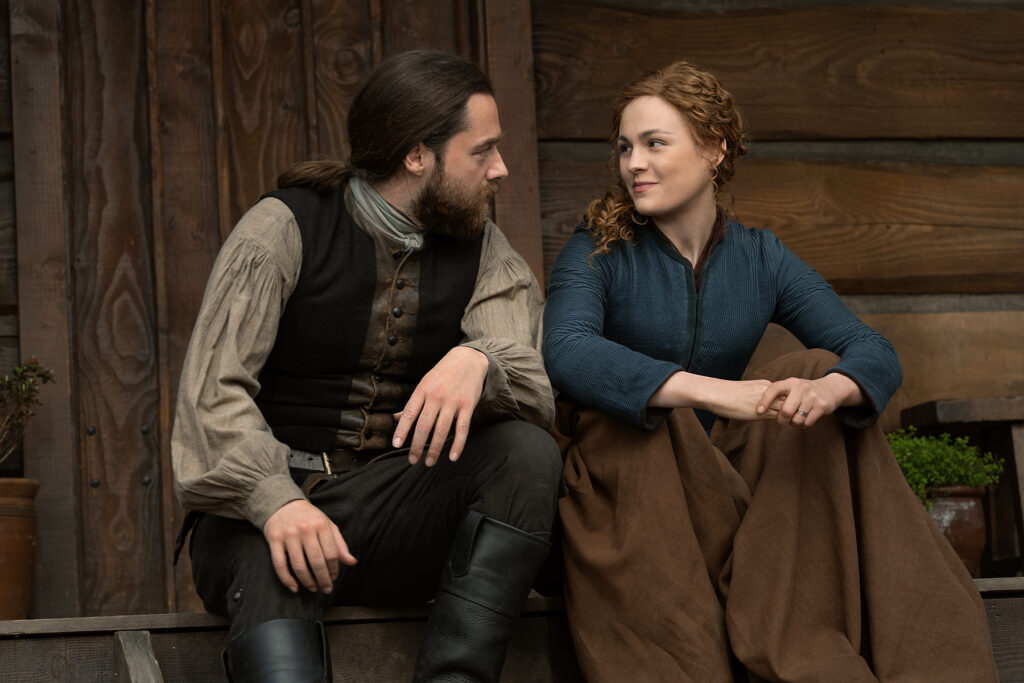 Roger and Brianna in Episode 605 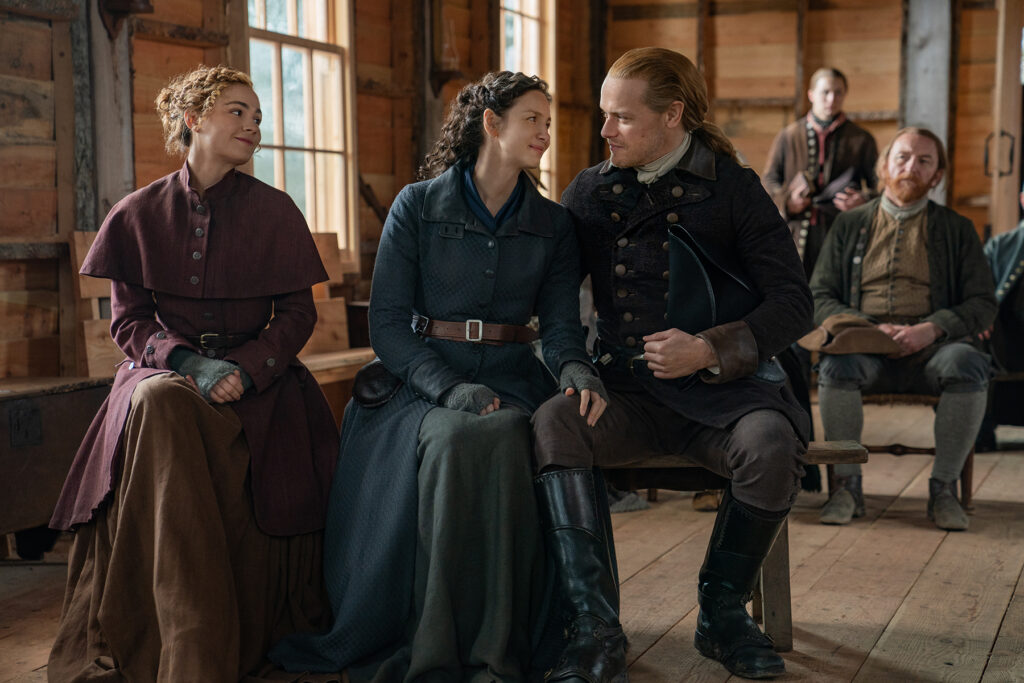 Brianna, Claire, and Jamie in Episode 603 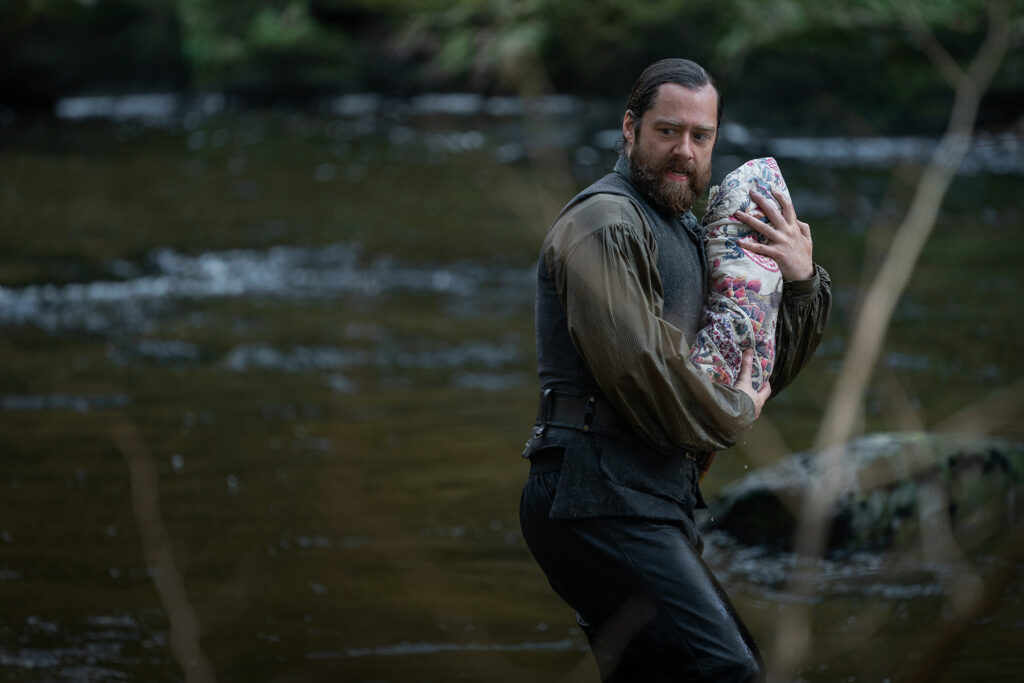 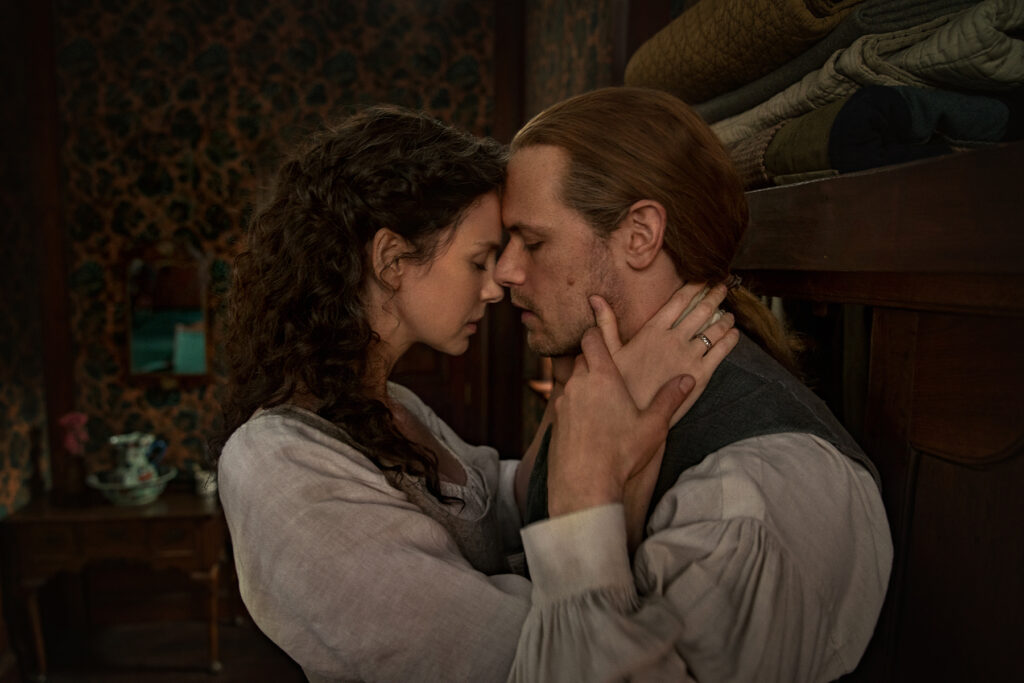 Jamie and Claire in Episode 602

In honor of #WorldOutlanderDay, I’m excited to announce that #Outlander Season 6 has officially wrapped and is coming your way in early 2022 with a 90-minute premiere episode! pic.twitter.com/q0RV8QEFEv

With the challenges of filming in these unprecedented times, Season 6 will be eight episodes with production on an extended, sixteen-episode Season 7 beginning next year. Read more here: https://t.co/F6BeJ7iLt8