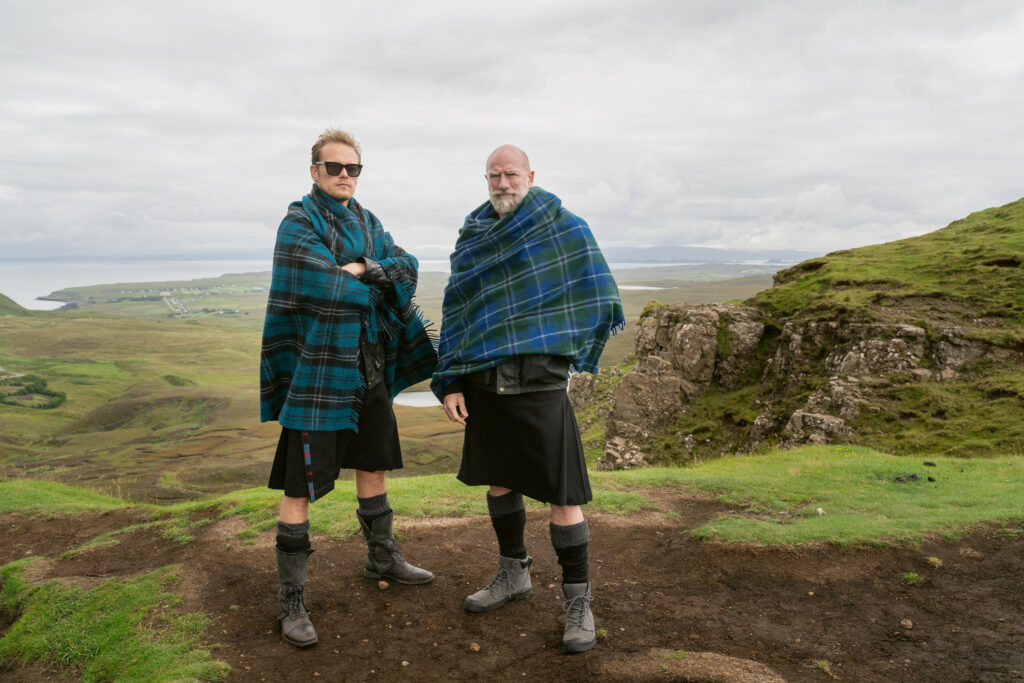 In the penultimate episode of Men in Kilts, Sam and Graham (but mostly Sam) reignite centuries-old clan rivalries, visit the ancestral home of the McTavish clan, and a lot more.

I’m not gonna lie; I am sad Men in Kilts only has eight episodes.

Have I dragged out these reviews a bit, not wanting the show to end to avoid returning to a state of endless Droughtlander?

But I suppose in the grand scheme of things; it was a wise plan. Always leave the fans wanting more, right? But I digress. Let’s get started with the episode!

What Sam and Graham do quite well with each episode is subtly teaching the audience Scottish history in a fun way that doesn’t feel like a droll documentary. They explain that Scottish clans still play a big role in Scottish culture, with many families still engaged in historical feuds that have yet to be resolved. One question I had regarding the clan feuds…Do the opposing clans really feel animosity towards each other?

Or is it more of a respectable disdain?

Sam and Graham meet up with representatives from clans MacGregor and MacLaren at the supposed gravesite of Rob Roy MacGregor. The four men stand in front of what’s supposedly Rob Roy Macgregor’s grave at Balquidder Kirkyard, with Sam and Graham playing awkward mediators between the two clan representatives. Historically, Rob Roy MacGregor was apparently like a Scottish Robin Hood. So why so much conflict over Rob Roy’s gravesite?

In a case of historical irony, the most notorious MacGregor of them all is buried on MacLaren land at Balquidder Kirkyard. (Is it akin to burying a Hatfield on McCoy land?)

But is Rob Roy really buried at Balquidder Kirkyard or somewhere else?

That’s the beauty of history, so many questions, and unsolved mysteries.

One thing that’s certain, though, is that Sam continues to be a huge dork throughout this episode. I don’t know if I can view Sam as Jamie the same way in season six after watching this show.

JAMIE tries to act all hot and cool and seduce Claire into a session of sexy times. The camera pans away from the hot couple until we hear a manly shriek of annoyance.

Claire can be heard chortling in the background. 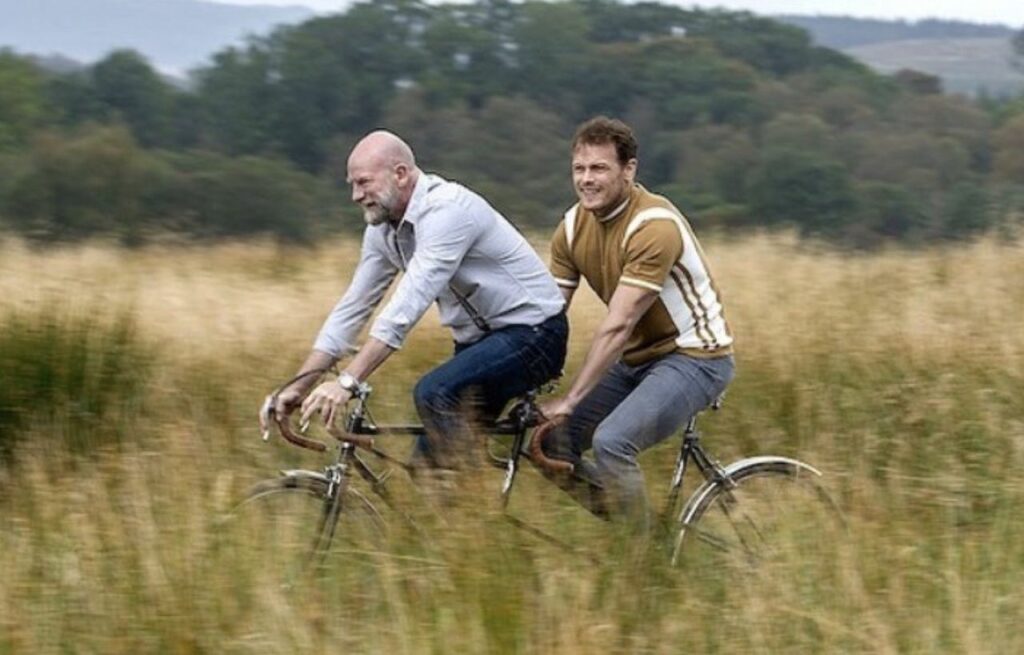 Anyways. We get a glorious scene of Sam and Graham riding a tandem bike. Honestly, I’d be perfectly happy watching a one-hour show of pure Sam/Graham content. These two would make a trip to the grocery store hilarious, and I would watch every second of “Sam and Graham Go Grocery Shopping.”

Back to the actual episode.

Graham continues to be curmudgeonly and isn’t thrilled with Sam being up to his ass on their bike ride. Sam continues to be Graham’s perfect foil, perfectly happy with their bike ride seating arrangement. Their next stop is this really cool factory (pardon me for forgetting the name!) that makes authentic Scottish tartans. After the battle of Culloden, tartans were outlawed, but like the Scottish clans, tartans remain a valuable part of Scottish culture to this very day. Graham mentions that the McTavish clan has several different tartan colors.

On the other hand, Sam has to be reminded repeatedly and to hilarious effect that he actually isn’t a Fraser. He does get some revenge against Graham, though, when the pair go to visit Graham’s ancestral family home of Castle Sween. Check out how Sam and Graham journeyed to the castle below.

I do wish they actually had a chance to walk around the castle. Instead, we get Sam teasing Graham about how a veritable caravan park surrounds the castle. They move on next to the home of the actual Fraser clan, Beaufort Castle. 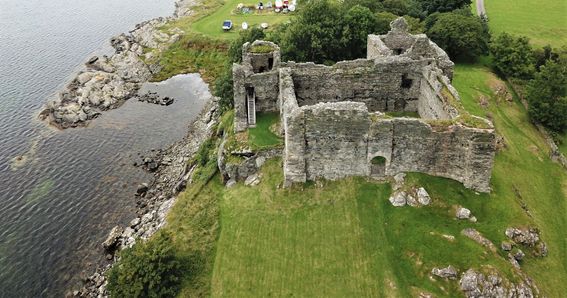 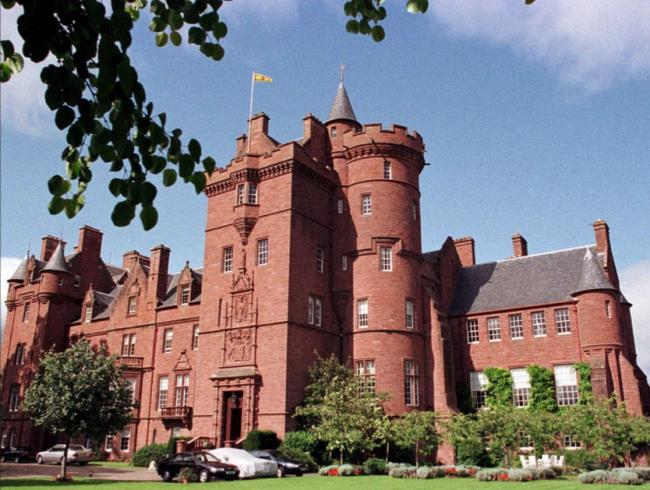 A Fraser clan representative happily tells Sam he can become an honorary Fraser, but he’d have to pay a fee, much to Graham’s utter delight. Sam decides not to forge a real-life path as part of the Fraser clan, but regardless he’ll always be Jamie Fraser to Outlander fans.

In grand Men in Kilts tradition, Sam and Graham end the episode with a glass of whiskey and a feast for the comedic kings that they are inside Castle Beaufort. I am genuinely sad that there’s only one episode left, but they really did save the best for last. All the roads Sam and Graham have traveled so far have been leading to Culloden. I can’t wait to see how Sam and Graham explore the history behind Culloden in the season (hopefully not series) finale. (Yes, I realize the season, not the series finale, has already aired, I am taking my sweet time with this Outlander-inspired content.)

These two dorks love Scotland, and their enthusiasm continues to be contagious and fun to watch. Has anyone thought to start a Men in Kilts-inspired travel tour? Who’s down?