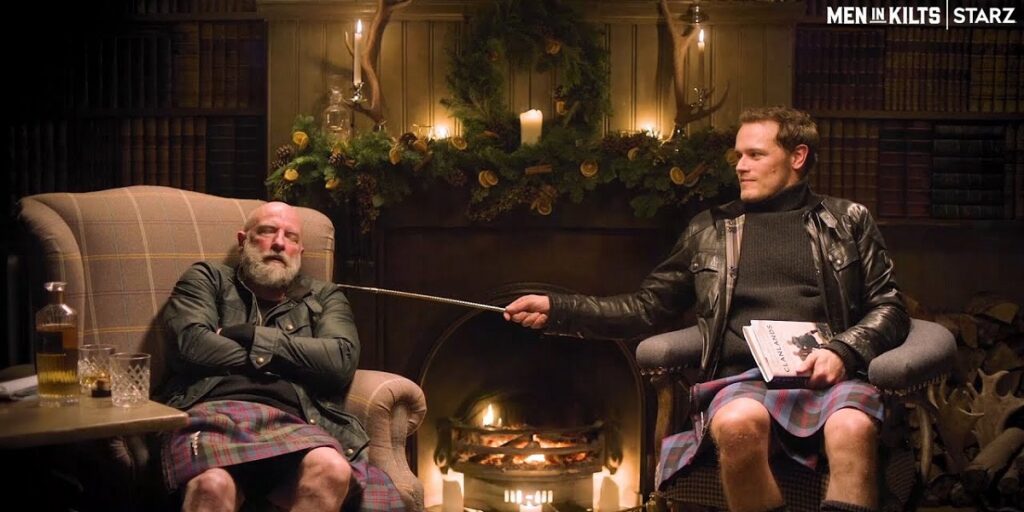 (Their relationship summed up in one photo.)

You know, I don’t think I’ve truly given Sam Heughan and Graham McTavish enough credit for their acting work on Outlander. Because as Men in Kilts reveals, these two men who portray/portrayed James Malcolm MacKenzie Fraser and his morally murky uncle, Dougal Mackenzie, in the show are actually huge dorks in real life.

And I love that.

Let’s travel across the gorgeous Scottish countryside with Sam and Graham! The first episode focuses on food. Sam is excited to visit a restaurant called The Kitchin, a Michelin star restaurant in Edinburgh (did you know that co-owner and head chef Tom Kitchin is Scotland’s youngest Michelin-starred chef-proprietor?)

Graham says he doesn’t like sharing. So naturally, Sam steals a bite of Graham’s hand-dived scallops baked in the shell. This is just the start of Sam’s sassy shenanigans, but they’ll come back to bite him a bit later on in a hilarious manner in episode two.

Sam and Graham’s next stop is deep sea fishing. Sam nerds out about the ship captain’s name being Captain Kirk and our favorite Scottish dorks toss a tiny lobster back into the ocean, returning to land with their fresh catch. They’re joined by celebrity Chef Tony Singh, who effortlessly whips up another world-class meal from Sam and Graham’s seafood haul.  Chef Singh also joined Sam and Graham for a premiere cook-along, check it out below!

Sam suggests that he and Graham should do a cooking program and I think viewers across the world screamed, “Yes please!” in unison.

Graham notes that the basic cooking tasks they’re doing aren’t exactly Michelin-star-worthy. Doesn’t he know Outlander fans will watch these two do literally anything? They could sit around and read the phonebook and I’d be like, “SOMEONE GET THESE TWO MEN EMMYS ALREADY.”

Alas, poor lobster. Chef Singh chops into the live lobsters Sam and Graham had caught as the two fully grown Scottish men look away, trying to distract themselves from the lobster carnage. They completely forget about the lobsters half a second later, when they feast on Chef Singh’s dishes. We’re only halfway through the episode and I find myself starving for Scottish food.

A food and drink-themed episode would not be complete without a whisky mention. Sam and Graham head to the island of Islay, home of the Laphroaig Distillery. These two work hard for their whisky, shoveling up peat (a necessary part of Laphroaig’s whisky-making process) but stopping the moment their hosts walk away.

A bit later these two fully grown Scottish men act like kids about to jump in a ball pit when they see the room full of barley (another part of the whisky-making process.) Sam gleefully glides into the barley and I just had this image of him as Jamie playing around in the barley and asking Claire to jump in with him while Dougal judges him from a distance, arms stubbornly crossed.

What’s really fun about Men in Kilts is that Sam and Graham are genuinely having a blast, and the feeling is contagious. I was smiling the whole episode and learned a bit about Scotland too! Sam and Graham earned that glass of Laphroaig whisky that probably costs a heck-ton of money. (Can you please make smaller size options for your Sassenach whiskey Sam? So I can justify buying it and feel like a fancy Sassenach?) 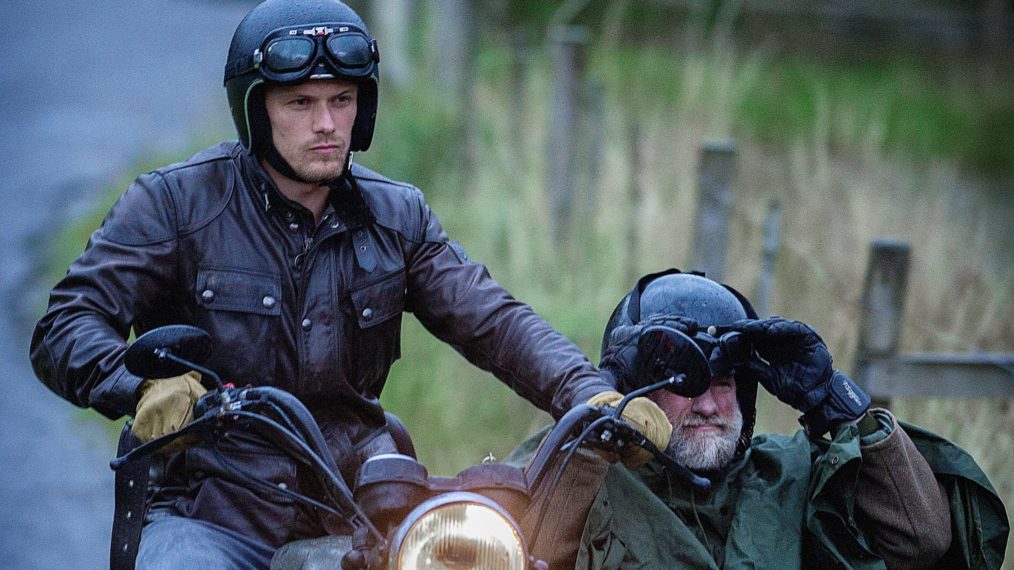 Sam and Graham continue their tradition of actually acting like uncle and nephew with episode two. Sam bets that he can beat Graham at the sports they’re going to participate in. Loser has to skinny dip into the ocean. 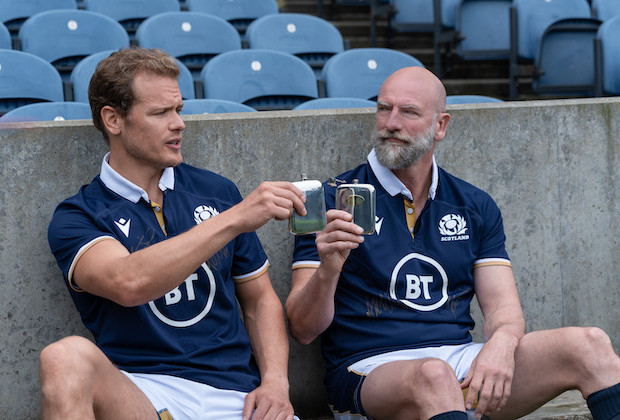 One of their first challenges is picking up a huge rock and placing it on top of another taller boulder-like stone. They estimate that the rock must weigh about 100 kg (Me being the American I am had to actually Google how much that was in pounds. The answer? 220 pounds! Great Scot!)

Graham doesn’t pull off a King Arthur moment with the heavy-as-heck rock and loses the round. Sam manages to lift it and place it on the taller stone. I cracked up when Graham pushed the rock back to the ground when Sam wasn’t looking.

Turns out Sam’s rock moment would be his last victory. Graham beats Sam at the next sport, the Highland games hammer toss (if I got the name of that sport wrong, I apologize sincerely to Scotland.) I mean, these two have always looked strong but throwing those heavy hammers was one heck of an achievement.

The next stop is the old St. Andrews golf course, considered to be the world’s first-ever golf course. (Old enough where Jamie and Dougal could’ve played a round or two?)

Graham’s glee over having a better golf stroke than Sam cracked me up again. What was even more hilarious was the shot of Sam in the corner, looking like a petulant child. Graham’s in the lead and the ocean seems to be beckoning to Sam.

But we’ve got one last sport, and of course, it’s rugby! Sam acts like a kid in a candy store being on the field (again, what makes this series so fun is how much fun Sam and Graham are clearly having. Their joy emanates through the screen.)

Graham is victorious once more, and that means Sam has lost the bet he came up with in the first place. (*Silly conspiracy theory time: The producers schemed up Sam losing to give fans a shot of skinny-dipping Sam. But then I realized fans had seen plenty of Sam in Outlander! Still plausible right? *These are silly conspiracies and should not be taken seriously*)

Sam later commented that his skinny dipping experience was a minus five in an interview but also challenged Graham to a second round of sports challenges. (Seriously Starz, renew this show for a second season already!)

I of course wasn’t shocked by my utter enjoyment of the first two episodes of Men in Kilts. It’s a fun, non-uppity travel series complete with plenty of Outlander callbacks! Sam and Graham are clearly good friends and I loved watching them banter with each other and how much fun they were having overall. I’d definitely recommend this series to anyone (Outlander fans in particular obviously) and can’t wait to see what Scottish shenanigans these two dorks get themselves into next. 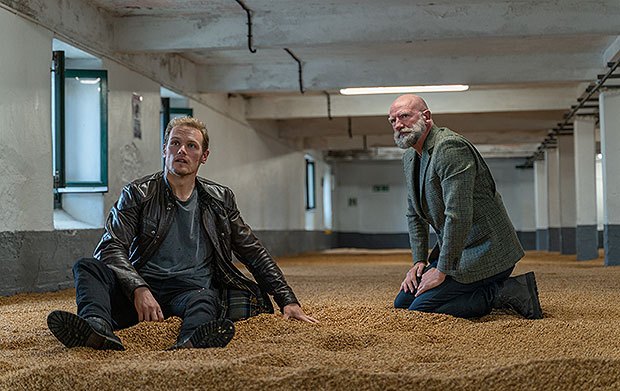 You walk in a room full of barley and these two men. What do you do?