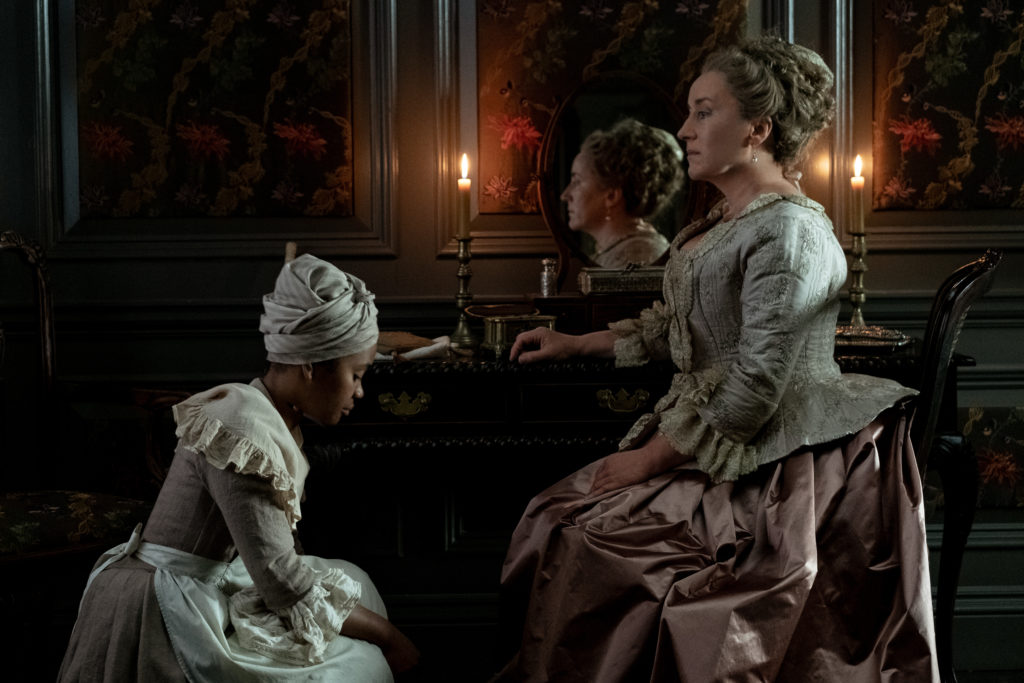 Reverence to my concern

So I’ll be sure to stay wary of you, love

In the previous episode, Claire says that when she stands before God, “I won’t ask about the nature of time; I’ve lived it.” It’s a perfect lead into the sixth episode, “Better to Marry Than to Burn,” in which another female character reveals her position in time. For women, time demands urgency as there are natural limits to a few of their most important abilities, and flaunting the predetermined schedules set within societal constructs are seen as either flagrantly decadent or foolishly disorganized. Subtract 250 years, and it was even more of a rebellion for a woman to negotiate her relationship with time, to set her own checkpoints, and to create her own third act.

The focal point of the episode is Aunt Jocasta’s reckoning of her own wellbeing amidst her choices for love or companionship. To begin a wedding episode with a flashback of multiple people killed on the side of the road gives the audience a sobering glimpse into her backstory as well as the foundation of her wealth in the Colonies. Still, it also explains her decisions on matters of business and the heart. To relinquish everything to her great-great-nephew is to allow herself some freedom to grieve and heal but allow the younger generations to flourish – a modicum of light amidst the shadow of guilt she has traveled within for three decades. Marrying the sweet but bland Duncan Innes (Alastair Findlay) is less about settling and more about self-preservation and the hope of attaining peace in her final years.

The languid pace of Jocasta’s wedding is a formidable challenge for Jamie and Claire. They must endure the formalities of socializing in high society, the conversations often involving the politics of how to retain such lofty social standing. While Jamie still walks the tightrope of information from and betrayal of Governor Tryon (Tim Downie), Claire has the added bonus of evading the clutches of Grade-A lout Phillip Wylie (played marvelously by Chris Donald), who looks like the dandy love child of Tiny Tim and Mister Peanut. Oblivious to personal space, his own garishness, and the reality than any female he approaches cringes as if he were a walking smudge pot, Wylie has his sights on Mistress Fraser, the latter gained heaps of experience dealing with insufferable fops from her time in France decades before.

Back on the home front, Roger Mac finally earns the recognition he deserves as his background in history as well as a fondness for stories led to the solution to combat a massive locust swarm threatening to decimate the fields throughout the Ridge. Like Jamie, Roger knows how to evaluate a situation with a steady eye, noticing the direction of the winds and currents of the smoke from the campfires, and he connects with the homesteaders primarily by putting his words into action alongside them, staying visible in the fields until the swarm passed. Once admits to Bree that he is finished with trying to outsmart Jamie, he musters the confidence to ask for his neighbors’ trust.

Since jerks tend to smell their own, Wylie reveals to Claire his illicit business ventures with none other than Irish Goodfellas-era Joe Pesci himself, Stephen Bonnet (Ed Speleers), who keeps racking up the karma points in Wilmington. When Jamie admonishes Claire later in the episode for her obstinate and often risky behavior with such characters, saying “You think too much of your own time,” it enrages Claire who has come too far to disregard her own background and how to utilize her past experiences from the mid-20th century to thrive on her own terms in the mid-18th century.

When Murtagh (Duncan Lacroix) pays a secret visit to Jocasta in her private quarters late that night to ask her to wait for him and then insinuates that she is choosing complacency over love, she rightly sets him in his place in a heartbreaking scene. “You once said that you wanted a woman who truly lived,” she says, “who kent what life is, not what she wished it to be.” Revealing more of herself than ever before, she tells him what happened to her family after Culloden and what brought her and her late husband Hector to America. Rather than numbing herself against love and passion, she is choosing peace and forgiveness after decades of grief. She is sacrificing herself from Murtagh’s life as she knows he is the type of man who would give her up for his cause, and while she respects his beliefs, she also stands by hers. Should Murtagh survive this war, she doesn’t want to be trapped in the endless cycle of more fighting, having already endured enough pain and anguish over the past thirty years. Loving someone doesn’t mean you will get your way, or that a happy ending is guaranteed. This is evidenced in the final shot of her breaking down as he leaves, knowing that she will probably never see him again. Fighting numbness means enduring pain, but Jocasta is willing to go through this to attain peace eventually.