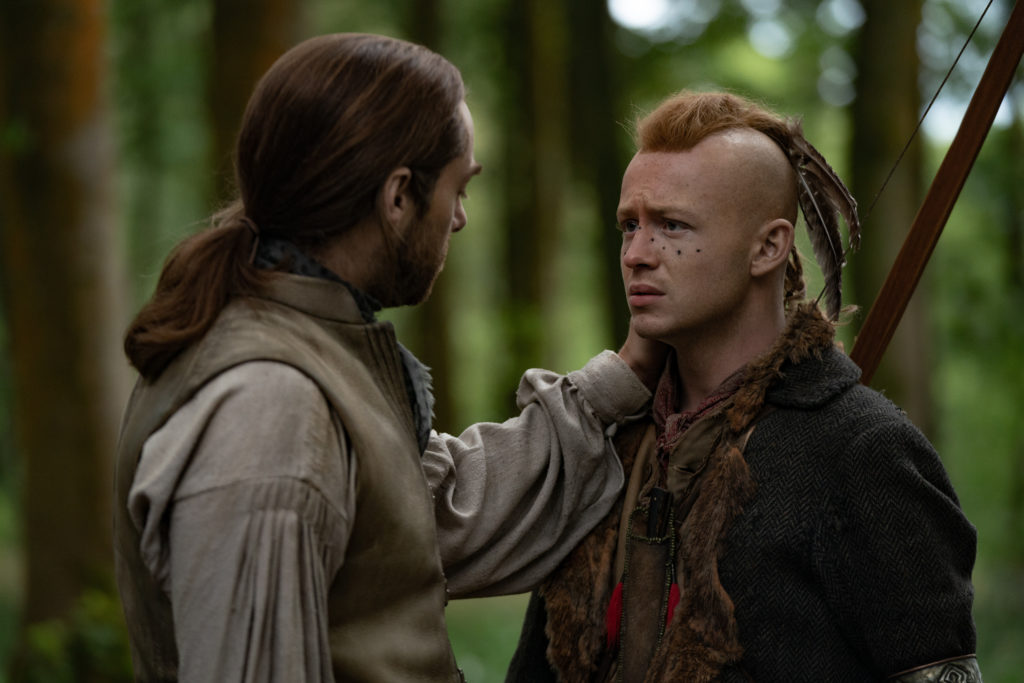 This week’s post-episode round-up includes interviews with Matthew B. Roberts, Richard Rankin, Sophie Skelton, and Diana Gabaldon. Only excerpts are below, so please click on the links for each article to read them in their entirety.  As always, be aware of spoilers for this episode and upcoming episodes.

EW: Why parts of Outlander were made into a black-and-white silent film

ENTERTAINMENT WEEKLY The decision to show Roger’s hanging through the lens of an old black-and-white film was brilliant. Can you share some of your thought process on this, how you came to this decision?

MATTHEW B. ROBERTS: We are a visual medium. Diana Gabaldon can go directly into the character’s minds, but I say … too often, I’m sure …we can’t film a thought. We have to find creative ways of getting into the character’s head then get them out on screen. So when Dani Berrow, the writer of episode 508, came to me with the silent picture idea, I immediately fell in love with it. One, because I love black-and-white photography. Two, because black-and-white makes you work a bit — makes you use your imagination. Three, it was a visually brilliant way to get into Roger’s thoughts. So, as she pitched out the idea, her thought was that Roger is a man whose gift is his voice, but now he’s deprived of it — forced into silence… experiencing his trauma psychologically, like a movie playing out in his mind. She cited a description in The Fiery Cross of Roger’s body being corpse-like, but covered in colorful bruises — reds, blues, yellows, purples, and greens — and thought there was something fascinating about the idea of this contrast, transforming Roger’s very real, living pain into black and white and into silence.

RICHARD RANKIN: That abstract way of telling the story was going to be a much more effective, a much more unsettling way into Roger’s psychology. I’m glad that they stuck with it. We shot every scene two ways, just in case the studio, the network, the execs didn’t like it. We shot all the scenes normally, acted normally, and then we would go on and do another take while shooting silent-movie style. All that meant to us as the actors was that we had do everything a little bigger, a little more stylized. It wasn’t too much of a shift. They shot it at a different frame rate. So in terms of on set, there wasn’t a huge difference for us. We just had sort of ham it up a little bit.

When did you first become aware of this storyline for Roger?

I’ve been aware of the storyline for a few years now. The casting process for Roger was quite a long one, so I had plenty of opportunity to read ahead and see where the story was going to go. Outlander was going to be a huge commitment, and I wanted to know what I was getting myself into. I think Roger has one of the best story arcs in the books, so that was something I was very excited about when I took the role.

The way this episode handles Roger’s story, with a silent movie-esque treatment is interesting. What did you think of that?

I wasn’t skeptical—I was maybe a bit dubious of it. But always very excited, and on-board with it because I think it’s an abstract way to get into Roger’s mind. It gives the audience an unusual perspective on the story that we’re telling in episode eight, which makes it all the stranger, and all the more sort of unsettling.

I was fighting for it, because I think it’s better to be brave in television. I think your potential is much bigger for a more exciting episode if you don’t just play it safe. The first time I ever saw any of the playback of the silent movie stuff, I was blown away by just how dark it was. I thought it really worked.

Every character endures some sort of trauma on this series, so this was a clever way to avoid retreading old ground.

They were very aware of that when putting this episode together. There was a lot of expectation on the episode, and [the question of], how do you tell a story when you have a protagonist who can’t talk? I read the episode and I was like, “How am I going to do this?” I have a whole episode based around my character and I have no dialogue. That’s really going to put me to the test as an actor. I’m going to have to perform in a much different way than what I’m used to.

How did you find that damaged version of Roger’s voice?

[Laughs] There were many versions of that. We had various levels of hoarseness and the damage to the voice box. It’s been condensed over a couple of episodes; I don’t have as much time with it as you would have in the book. I wanted to keep it for a little bit longer, even through the rest of the season, [to show] how much of a struggle [it was] for him to speak longer, but they wanted me to start reining it in a little bit earlier so it didn’t detract from later episodes.

It’s such a dark, intense episode, but I have to imagine you were keeping things pretty light behind the scenes?

I like to keep things light and keep spirits high on set. We have such long days, and trying to remain jovial and motivated often helps the people around you have a good time. However, I wasn’t my normal self shooting 508 because it was a tough act to shoot. Roger was always in a dark, tormented place. He’s depressed, he was approaching suicidal, or at least there was a flash of something [in him] that thought that. And so to be in that frame of mind, I was probably less fun to be around. I was probably the least fun I’ve ever been to be around in episode 8. [Laughs] Those scenes between Caitriona [Balfe] and Sophie where they’re looking fed up and sort of exhausted by it all were probably quite true to life. I was like that off camera as much as I was on camera.

Parade:  Grief Bonds Roger and Ian on Outlander–Diana Gabaldon Explains Why They No Longer ‘Fit Into Their Own Lives’

“For Roger, the loss of his voice is a HUGE thing,” Gabaldon says. “He’s been making modest progress in gaining the elementary skills of an 18th century man, but his ability to sing is the one thing that’s he’s genuinely good at. It was the defining aspect of his personality and his life–or so he thinks. He can’t bear the idea of trying to talk, and failing.”

“Ian Murray has lost the thing most important to him,” Gabaldon says. “His loss isn’t explained in detail, but we (and Roger) gather that the thing he’s lost is his (unknown to us) wife. Ian has all the 18th century skills that Roger lacks, but he hasn’t got his wife any longer. Roger has.”

She continues, “Neither man is dealing well with his grief and loss. Each of them pushes away all well-intended gestures from family and friends. They know they don’t fit anymore. Not just into the structure of the family that longs to embrace and heal them—they don’t fit into their own lives.”

TVLINE | What I love about Brianna in the books is that she’s kind of a hothead. In the show, Bree seems a little bit more even-tempered — but I enjoyed watching her get mad at Roger in this episode.
Yes, and that was something I really wanted to go there with. Because I do feel like a lot of the time, I have to protect Bree, because I do think that she has a lot of bad press. I always say, ‘She’s a Fraser. She is hotheaded, she has a temper, and she feels things very deeply which often can come across as anger or upset or maybe some people sometimes think that it’s kind of a misplaced upset or anger or whatever. But I always say I think while that shows on an 18th-century outlander, Jamie, as quite sexy and moody and angry and whatever, on Brianna, everyone just calls her a brat. [Laughs] And it’s like well, she does have feelings and she’s showing them. Like, you know, leave her alone! [Laughs]

In that scene when she sort of lays it on Roger, I really wanted to go there… She has been so patient for months now. Brianna is still suffering PTSD, but she puts on a brave face for her family. That’s not something that Roger’s asked her to do, but she’s doing it. She has to get up every day and she has to look after Jemmy and she has to do everything else and the fact that now she is the one looking after Roger, I think there’s a little bit of, “Come on, dude. I’m going through something, too.’”

TVLINE | It’s not even like she gets a huge amount of comfort that he’s not dead, because he still seems like he’s gone once he comes back and heals.
When they find out he is alive, she doesn’t get this moment of joyous relief with him so much, because he’s not back, really… We had the Murtagh funeral scene — all of those were actually in that originally, and we did a whole scene there with us all around his grave and laying stones for him and everything. Roger was in the scene, and when [the behind-the-scenes crew] looked back at it, they said actually him being there looks too engaged. We really want to show how disengaged he is and how little time he’s spending with the family. He’s just locking himself away and turning himself off from the world.

TVLINE | Before I let you go, gimme a tease for something that’s coming up toward the end of the season.
We may or may not see Bonnet [again]. Obviously he has resurfaced, but we may encounter him at some point… We tried to put somebody in danger who isn’t the person that we initially may think it will be. And that sets a fire under Bree, and she’s determined to save that person.