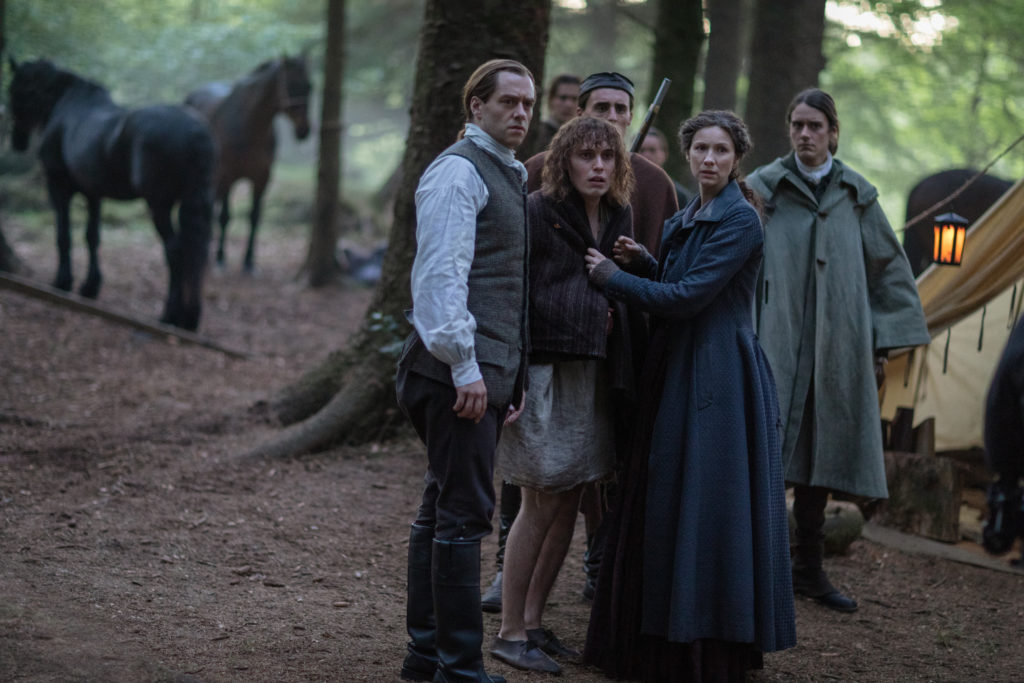 Outlander isn’t always the most enthralling show, especially as a book reader, when you know what’s coming.  A fresh re-read of the book that the season is based upon is never a good idea, in my opinion.  It refreshes your memory about what is about to happen, and the constant comparisons are not always useful for the enjoyment factor of sitting back, relaxing, and watching the latest episode.  I’ve put off a re-read of The Fiery Cross for many years because it was my least favorite book of the series by Diana Gabaldon.

While I have vague recollections of the storylines, it is “Free Will” that changed the tone of Outlander altogether, even if it is only for one episode.  Never have I experienced nail-biting suspense in Outlander, and it is a welcome and unexpected change from what we usually see.

The Beardsleys are always going to make something feel a bit off and not normal.  We are first introduced to this “family” in the first episode of the season with Josiah (Paul Gorman) coming to Claire (Caitriona Balfe) for help with his constant sore throats.  His reputation preceded him, and Jamie approached him for help hunting and providing for his family when he is away.  The thief’s brand does not dissuade Jamie from his offer.

We meet Josiah again when the Frasers and his militia are traveling the area looking for recruits.  A pants-less runs through the camp with someone running after him yelling, “Thief!”  When caught, Claire and Jamie immediately think he is Josiah, but Josiah himself appears shortly thereafter.  What we have here are twins, Keziah (Paul Gorman playing a double role) and Josiah.  We learn that Kezzie is deaf, due to abuse, he’s skinny, and he has a good heart.  He couldn’t help himself from the Frasers’ provisions in his current state of malnutrition.

It is through Jamie and Claire questioning them that they learn the backstory of Josiah and Kezzie.  They are indentured servants for a term of 30 years to a man with the last name of Aaron Beardsley.    Showing that Jamie is a good man again (for like the thousandth time), he offers to buy their indenture, but that requires going the Beardsleys’ home.  Jamie and Claire must split off from the rest of the group to make this right.

The tone of the episode changes immediately upon Jamie and Claire entering the setting of the Beardsleys’ property.  The barn and the house look vacant and lifeless upon arrival, but it is upon Jamie’s investigations of the cabin that he meets Fanny (Bronwyn James) in about as creepy a way as possible.  She wasn’t there, and then she was in a broken window with a grimace upon her face.  Inhospitable is an underestimate of what kind of person she is.  She is short with Jamie, granting him the indenture and then shutting the door.  He returns to her door again, realizing he must get the papers, so no claim is made of them in the future.  Reluctantly, she allows him to follow her in.  Claire follows shortly.

There are just goats running around the cabin, which doesn’t seem at all sanitary, but they are the least of the problems at this juncture.  The smell is overwhelming in the kitchen/dining area, with Claire and Jamie’s reactions to it, we can almost smell it also.  The pounding on the closet door ramps up the tension, but it is just the male goat, secluded from the females.  Did anyone else get The Witch vibe in this scene?

The fluid dripping down from the attic is now on the top of Claire’s very concerned list.  I’ve never seen anyone so boldly go walking around a house that doesn’t belong to you. “Hey, what’s that smell and fluid?  I’ll just go upstairs and find out,” is basically what she said and acted out.  At this point, it would have been better if she just left for the viewers’ sake and Jamie and Claire.

Claire finds an old man lying on the floor in the attic.  He isn’t moving and is in terrible shape.  Claire bends down to touch him, and he moves.  This scene has to be an ode to the deadly sin of sloth scene in Seven.  So here lies Aaron Beardsley, impaired beyond recognition due to a stroke and the abuse of his fifth wife, Fanny.  I hope no one was eating anything during this episode.

Aaron is now on the kitchen table, pulling maggots out of his wounds.  Don’t you remember those flies that Claire was swatting out of the way in the attic?  He has further evidence of abuse that does not need to be repeated.  Fanny trying to kill him when the Frasers turn their backs is not helping the situation.  Oh, and the baby she had shortly afterward and who is of mixed race aren’t adding any positive vibes either.  Fanny deserting the whole situation, although I don’t blame her, really puts a kink in any plans.

At this point, there are dilemmas of the heart and mind for Claire and Jamie.  Claire has her doctor’s oath.  She is behooved to take care of Aaron as well as the baby, but doing so would take far too long and delay them much too long to getting back with their group.  Jamie has no such oath, but he is a man of honor and realizes that not much can be done for Aaron.  It is not worth keeping him alive to take to Brownsville and find someone to care for him.  They also now have a baby to take care of, neither is so cruel to leave it to die.

The decision is left up to Aaron, the cruel man that started this whole mess.  He can blink to communicate and agrees to Jamie, putting him out of his misery.  This ending for Aaron is not something that Claire could do herself.  The gunshot to the head at close range doesn’t seem like the best idea, but it appears the Frasers are in a hurry, and this is the best way to end his suffering.  With a gunshot, the story has ended.  The passenger pigeons flood the sky at the sound of the shot and block the sun.

Other things happen in this episode, but it is the Beardsleys’ story that takes up about half of the episode and is the most exciting part of it.  Having forgotten most of the details of this part of The Fiery Cross, I was able to watch this episode uninhibited by book comparisons and knowing what was going to happen.

The title of the episode, “Free Will,” takes many different meanings to each character of this episode.  Obviously, the Beardsleys did not have free will, except for Aaron.  Claire did not have it in her care of Aaron, Fanny, or the baby.  Jamie is compelled not to choose the easiest route out of the situation due to his honor and his position on Fraser’s Ridge.  Josiah took his freedom but is still not wholly free due to his brother and not being found by Aaron.  Aaron is the only one who had free will up until his stroke; then, it became Fanny’s.  Whether Roger (Richard Rankin) has free will is debatable.  His duty constrains him to his father-in-law and his family, but he still has in mind to go back to his time.

I had some minor issues with the lighting and camera work at the beginning of the episode.  The lighting did not register well when Jamie returns home in the beginning.  It could have been my screener, and I hope it is fixed when it airs for everyone to see.  The lighting registered to me like it was supposed to be a dream for Jamie.  The time-lapse of moldy bread also did not come across well on my screener.  It seemed counterintuitive to the flow of the episode.

However, revisiting Claire and her moldy bread did alleviate some of my concerns about her experiment in last week’s episode.  She adds water to the bread, which helps in the development of mold spores.  I can’t help but think the guy working in the corner while Claire and Marsali (Lauren Lyle) discuss her knowledge may think Claire’s got a few screws loose.

“Free Will” will end up being a standout episode in the series for me.  While it is not my favorite episode of the series, it changed how we view one episode, doing a 360 on the usual tone of Outlander.  It is unexpected but a welcome reprieve from sometimes predictable storytelling.  While I commend Luke Schelhaas on his script, these are Diana Gabaldon’s characters, and she made them wacky and creepy.  The new director Jamie Payne also excelled at stepping into the director’s chair and setting himself apart from other Outlander directors with his first episode.  I can’t wait to see where the next episode picks up as this episode has ramped up the excitement level for me. 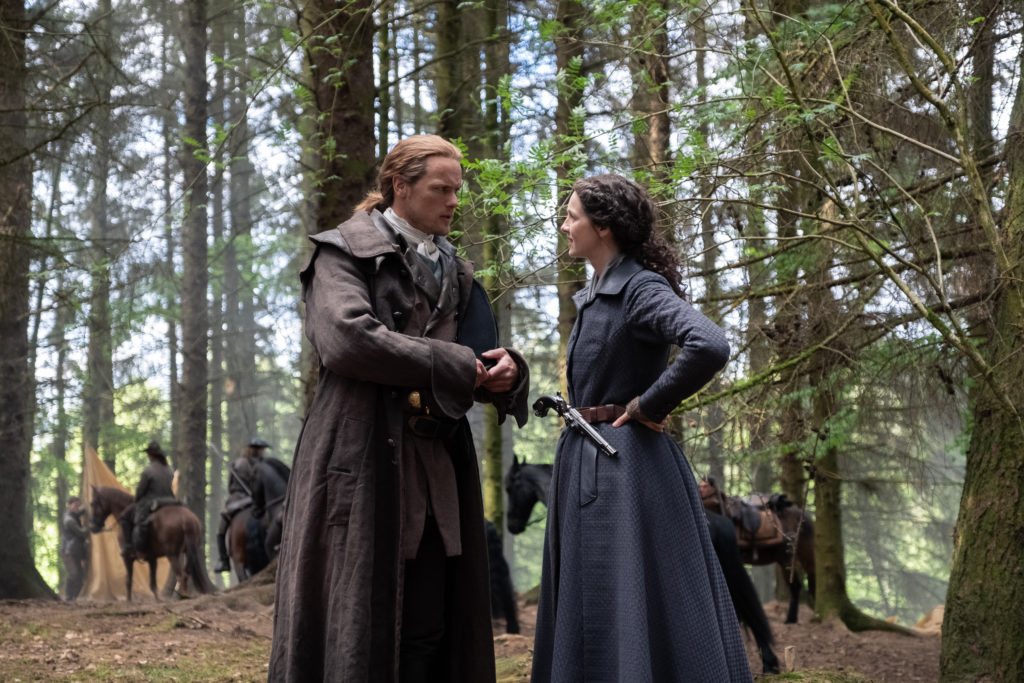