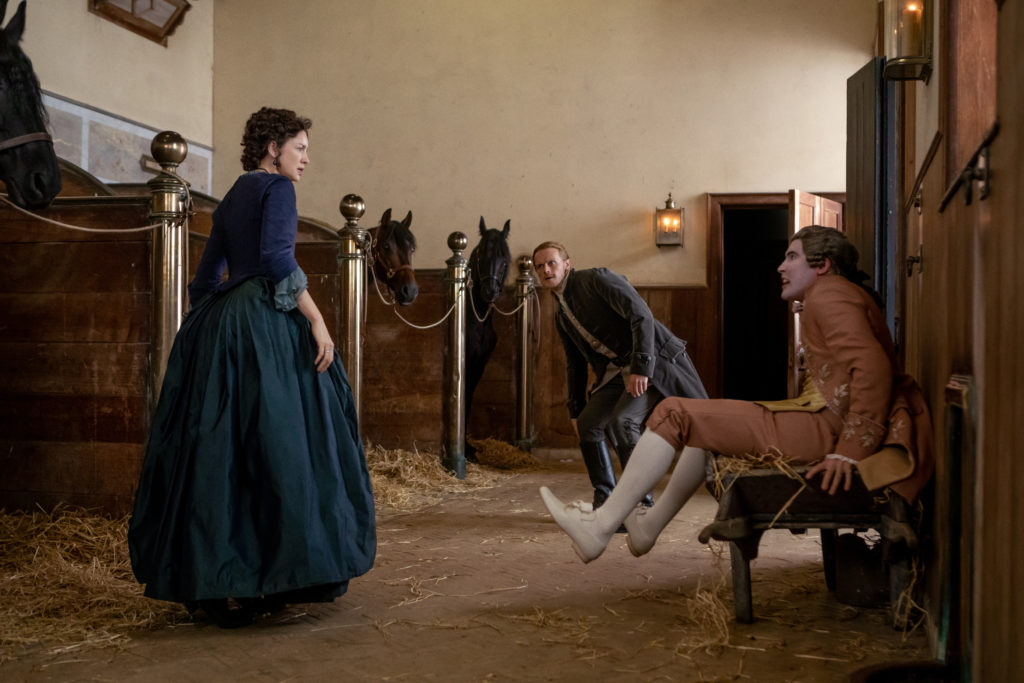 This week’s post-episode round-up includes interviews with Diana Gabaldon, Maria Doyle Kennedy, and Matthew B. Roberts. Only excerpts are below, so please click on the links for each article to read them in their entirety.  As always, be aware of spoilers for this episode and upcoming episodes.

Parade:  Outlander Fans Get the Sex Scene They’ve Been Hoping for, but Diana Gabaldon Thinks They Might Not Be Satisfied

“As for Jamie and Claire’s fight–and I suppose you would have to call it makeup sex, though as played, it was more or less a continuation of the fight–this is one of those ‘iconic’ scenes from The Fiery Cross,” Gabaldon tells Parade.com exclusively. “Those are the scenes that book readers particularly value, and spend months hoping will be included in the show. The book fans will be happy that it is included.” However, the more nitpicky fans might be distracted. “I’m afraid it’s one of those situations where they’re so provoked by the omissions and changes that they may forget to be thankful.”

Where it falls apart is in the first half of the stable scene,” Gabaldon points out. “The dialogue is bumpy, awkward and disconnected, but much worse, it’s totally out of character,” she points out. “Honestly, even Show-Jamie would never say jerk*ss stuff like that, no matter how drunk—and instead of a coherent and/or passionate fight, the interchange just stops dead with a slap and a long mutual stare, which we are meant to believe is the ignition of sudden sexual desire.” While she’s the first to admit fans wanted this scene, it might not be exactly what they hoped for; she describes it as “an extremely awkward sex scene—made more awkward by the fact that they did, in fact, use the book dialogue at this spot, and the sex did take place against a wall in the stable, but the abrupt transition, the set, lighting and direction were…not suited to what was meant to be going on.”

EW: Why Bree and Roger battle a terrifying plague of locusts on Outlander

In the book, Bree goes to the wedding. Why did you keep her home to battle the locusts?

We wanted to give Roger and Bree a challenging dilemma that showed that they are ever-evolving as a loving and equal couple. To explore how Roger and Bree work as a team, we kept them home together to fend off the swarm and keep Fraser’s Ridge safe while Jamie and Claire were away.  In the book series, the locusts attack the Ridge in “A Breath of Snow and Ashes,” which is book six. However, it’s Claire that tells Jamie about burning a field to save more crops.

ENTERTAINMENT WEEKLY: Why does Jocasta love Murtagh, and why does she turn him away?

MARIA DOYLE KENNEDY: I think it’s one of those just absolute unavoidable collisions of personality. She’s just utterly compelled to him. It’s the one in a million. But she just can’t do it again, you know? We were talking about this a little bit the other day, that grief is the price you pay for love. She knows that he loves her. But he’s landing the night before her wedding to say, “No, sorry, I did mean to say that I actually do really love you, and will you wait for me?” I mean, what?

Your chemistry with Duncan is just the best. Did you get along immediately?

Yeah. He’s a great fellow, Duncan. We just got on, yes, immediately. And we understood each other. The very first thing we had to do was a really intense scene. He already knew his character so well, so it was nice for me to come into something that was already so shaped and strong.

When you joined the show in season 4, did you know that Jocasta would begin a romance with Murtagh?

It just showed up in the script one day?

Yeah. She’s been through three husbands already, and she’s showing no signs of giving any of that up, so that was really funny.