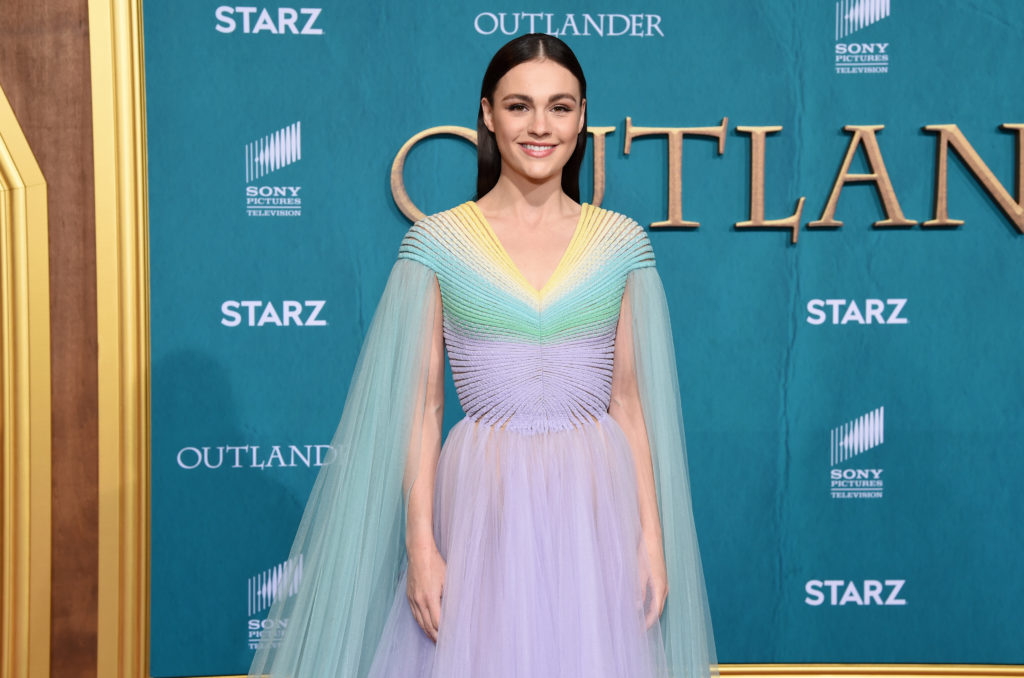 Sophie Skelton has a new extensive interview feature by Town & Country. It includes a new photoshoot, but you will have to go to their page to view them and the full interview piece.  Excerpts are below which include quotes from executive producer Maril Davis as well.

“I think the first time I auditioned for Brianna was about 2014, and then I didn’t hear anything for a year. There aren’t many times where you really feel protective over the role. For some reason, I really did for Brianna. You go on so many auditions and often you don’t hear anything, and that’s fine, but this one actually really hurt,” she says.

Turns out, producers weren’t ignoring her—they had just decided not to bring Brianna into the story until a later season. It was a huge relief for Skelton to learn that. “I was like, ‘Oh. Sometimes it can be as simple as that.’ You have to have such a thick skin because there are so many cogs turning that you don’t know about.”

So the Outlander hair and makeup team set out to turn Skelton’s brown hair red. At first, they tried to dye her strands—to somewhat disastrous results.

“They had to bleach it, but then it got bad. It became like straw and then it just kind of fell out,” she says. “I remember one of the first days when we went to the salon and the head of hair and makeup was in there. They put all that foil on, and I never really dyed my hair, so I had the foil, and then they took it off and all I could hear was someone behind me go, ‘Oh my God.’”

“Just give the girl a break,” Skelton says. “I feel very protective of Brianna and I feel like she gets some bad press, but she’s really the female Jamie. I think what people think looks very sexy and brooding on an 18th-century 6-foot-whatever Highlander, once you put that on a 16-year-old girl, people just think, oh, she’s bratty and mean and rude. But, you know what? She’s had a tough life.”

Book readers know that Brianna’s healing is far from done, and Bonnet remains a threat both to her and to her son Jemmy. But Davis was tightlipped about what to expect this season from Brianna, saying only that Skelton’s performances are “heartbreaking.”

“There are episodes we haven’t gotten to yet but she’s incredibly powerful,” Davis says.

Skelton, too, was careful not to spoil what’s to come for her character. When asked about the possibility of a future confrontation between Brianna and Bonnet, she simply said, “Brianna’s work is not done.”