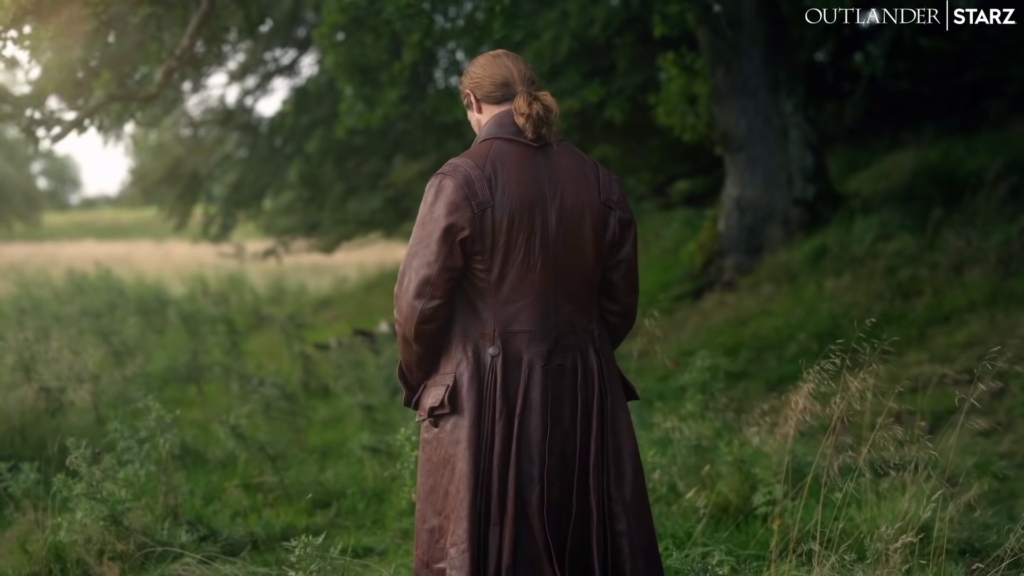 As the last few notes of the newest version of “The Skye Boat Song” plays over the opening credits, we witness the duality of loss versus letting go that will permeate the first episode of Outlander’s fifth season, based on Diana Gabaldon’s fifth book, The Fiery Cross.

The “lass that is gone” no longer refers only to Claire Beauchamp Randall Fraser (Caitriona Balfe) but now more aptly to her daughter, Brianna (Sophie Skelton), who is preparing to wed Roger Wakefield (Richard Rankin) and move forward as a new wife and mother, while also dealing with the residual trauma of her rape by Stephen Bonnet. As Claire and Jamie (Sam Heughan) are establishing their home and community in America, as well as adjusting to the new permanence of their relationship in the same time and place after decades apart, the prospect of the fruit of their union leaving them so soon after their family reunion comes with varying degrees of support. Claire, as with most mothers, is tender at the thought of her baby growing up but secure in the knowledge that she and Frank raised a bright, intelligent, assertive young woman who has dealt with grief and trauma and survived. Claire was a working mother at a time when that was a rarity, and independence and strength is something she has always valued and encouraged in those she loves. Jamie has had much less time with his daughter and, as such, is more hesitant to give her away, especially to a man who, in his estimation, is so different in background and temperament.

Jamie is also a man of the 18th century, albeit an educated, cultured, and thoughtful one. He has strong opinions and is confident of their correctness, and it takes a determined person to present an alternate perspective that he deems worthy of contemplation. Roger is not only new to him in person, but compared to a Highland warrior and laird, he seems a nebbish scholar long on theory and short on experience. It isn’t his intelligence that Jamie – a polyglot and fervent reader – doubts, but his hesitancy of returning upon hearing of Brianna’s rape by Stephen Bonnet and subsequent (?) pregnancy certainly leaves a black mark on his conduct record. When Jamie trusted Frank to raise Brianna after sending Claire back through the stones to the 20th century, he didn’t have a choice as Culloden was happening, and they both knew the outcome in Scotland afterward. When Roger didn’t run back to Brianna immediately afterward, it casts doubts as to his honor and forthrightness, and to a man who has been stripped of land, title, family, culture, identity, and agency in the past, those are traits that should not be sullied.

To be faced with a competitor for his daughter’s attention and admiration from his homeland, but a different time is going to be a rough compromise on both sides. Jamie has lived off the land; Roger has immersed himself in books. What the two men actually have in common is the way they scaffold the environment in which they exist to steadily master its intricacies. In the countryside, Jamie can analyze the weather and the terrain, the trails of wild game and the dangerous spots where an enemy can hide; in town, he understands the patterns within a community and its power structure, who to speak to and how to exist both in public and under the radar. As a leader, he must constantly balance what is visible and concealed (his time in prison and as A. Malcolm has honed this laborious skill), how to not only keep enemies in good standing but also keep friendships from becoming liabilities. As Jamie’s world has grown in ties and complexity from the solitude of season three, the burden on his shoulders has grown greater as his ultimate goal remains constant: to establish home as both a physical place and manifestation of security, comfort, and prosperity for his loved ones and kinsmen.

In comparison to Atlas, Roger may seem like a scarecrow about to lose the remaining strands of its stuffing and admittedly feels adrift and ineffectual for the time being as his qualifications are not in high demand in the pre-Revolutionary Ridge. Look closer, however, and Roger’s zone of proximal development (to borrow from social constructivist Lev Vygotsky) is primed and ready to thrive under observation of and tutelage from his new father-in-law. As a historian, Roger knows how to research, which means he knows how to identify a problem, formulate a theory, investigate variables, follow clues, and rely on patience and reflection to find a solution. For better or worse, this learning style influenced how he arrived at his decision to return to Brianna, but it also found Jamie. Both Roger and Jamie know how to study people and gauge their reactions; similarly, they approach situations like throwing the pieces of a puzzle out on a table, piecing the perimeter together, then working on patches with the end result in mind. If the two can eventually recognize these traits in each other, then they may develop a mutual admiration and respect.

Comedian Chris Rock famously said, “A man is basically as faithful as his options.” Whether you support or dispute this statement, it does make Roger’s situation more precarious as Jamie continues to browbeat. There is always the option for Roger to return to the 20th century, to his studies and his university, to flush toilets and hot baths and motorized carriages. It is also an option for Bree and baby Jem. If Jamie does not allow Roger to assume some agency in the New World, to lay a foundation and see it as his America, too, then Roger can simply return to the former one – which is newer than New – and take his young family with him. Right now, he is choosing to leave behind an established life for the uncertainty of the future in the 18th century.

While the younger man needs to temper his pride with adaptation of his skills in a new world, the older man must recognize how his prejudice against someone he barely knows is preventing a valuable ally in his family’s and community’s progress. Governor Tryon (Tim Downie) uses Brianna’s own wedding to assert his control over the colony by pressuring Jamie to track down Murtagh and suppress the “Regulator pestilence.” Under the sheen of political discourse, Tryon communicates his perception of the Scottish people as inferior to Jamie himself, using the Ridge as leverage. As much as Jamie detests being a politician, he realizes that Scottish identity and loyalty are as much a trait under suspicion from one group as a valuable asset to another and that visibility of such communicates a stand as effectively as a call to assembly. “You know these Scots,” Tryon said, “You are one.” So Jamie must treat the political sphere within the Carolinas as he would a hunt out in the backcountry: surveying the terrain, ascertaining the traps and pitfalls, spotting the hidden trails.

As the male characters’ power struggles are more external, the female characters’ challenges are more internal. Amidst her transition to young womanhood, Bree has faced a violation not only of her body but her peace of mind and self-confidence. Similar to her father’s trauma after rape, Bree detaches herself in moments of intimacy after hearing that Bonnet might still be alive, and that vocal block resurfaces that won’t let her speak about the ordeal. While Roger is serenading Brianna on their wedding night to ease the anxiety before they consummate the marriage, three relationships are shown with varying degrees of closeness. Aunt Jocasta (the always awesome Maria Doyle Kennedy) reunites with Murtagh for a seemingly final encounter: they can not mutually see each other, either visually or in their life paths. Jamie and Claire babysit a fussy grandson and have to remain quiet while they make love so he won’t wake up, so they can’t speak to each other and let their bodies talk (which they do quite well). While Roger is tender and sweet with Bree, a woman’s satisfaction is largely internal, and it takes a sensitive and knowledgeable partner to recognize when this is not achieved, and since her trauma is fresh on her mind that night, they aren’t feeling each other at the same depth and intensity.

What we let go of and what we leave behind can be very different in whether it pushes us forward or holds us back. For the moment, Bree can’t let go of her trauma at the hands of Bonnet. Roger can’t fully leave behind his life in the 20th century. Claire can’t leave behind her knowledge of modern medicine as she becomes her community healer. Jamie won’t let go of his Scottish identity. Murtagh must let Jocasta go as he is a wanted man. Sometimes we let go of a dream; other times, we leave old habits or preconceptions behind. Sometimes we have to leave people behind; other times, we have to let them go their separate ways. Jamie, Claire, and Roger are all parentless, which is why it is so powerful when Roger lets go of his pride and marks Jem’s forehead with his blood. In this new place, all four have left something of their old lives behind in order to forge ahead as a new family; what the season will reveal is how strong the pull is to chase after the past again.