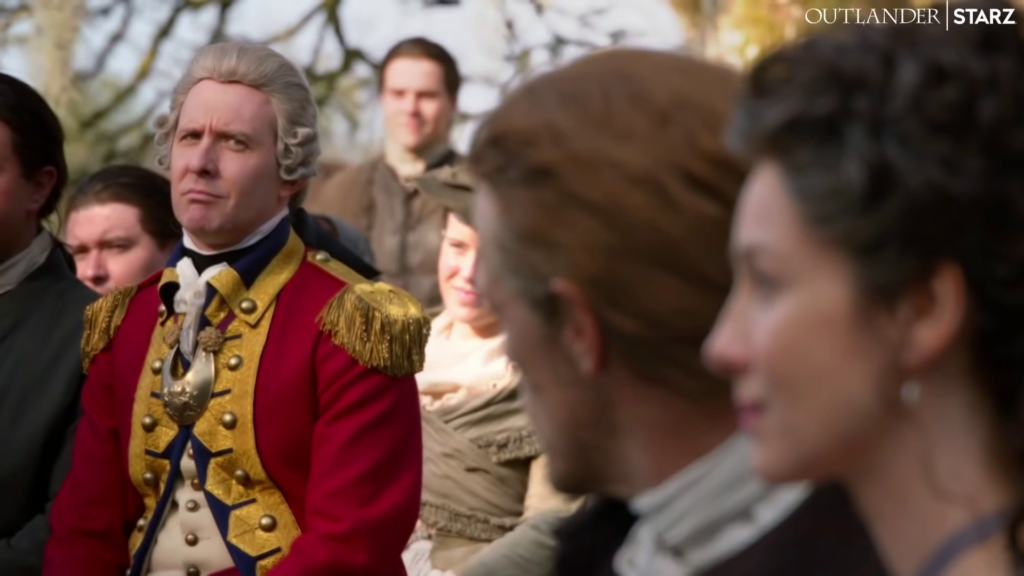 Tim Downie (Governor Tryon) did an interview with Entertainment Weekly that came out shortly after the first episode of season five aired.  Tim gives us a preview of what to expect from his character during Outlander season five.  Excerpts are below, but please head to EW to read the entire interview.

ENTERTAINMENT WEEKLY: You’re set up to be the biggest threat to Jamie and Claire this season — in a way, carrying on the legacy of Black Jack Randall and Geillis. How do you feel about that? Relish it? Fear the hate a little?
TIM DOWNIE: I absolutely relish it. And actually the fans have been incredibly generous considering, for all intents and purposes, I am the devil incarnate. Being English, being a Redcoat, being slightly threatening to Jamie, I mean, all of these things will pretty much have you thrown under a bus. But they’ve been incredibly gracious and they’ve been incredibly open and welcoming into their fandom. But it is enormous fun being given that chance to play someone so Machiavellian and twisted and power-hungry. It’s great fun. Who wouldn’t relish it?

Governor Tryon is one of the few real historical characters we interact with at length in the series. Has that been a boon to you in terms of research and perspective?
It has. Because it really planted his feet somewhere. The actions he did were real, and they have real consequences in the real world. And that’s quite exciting and not to be taken lightly. He’s had enormous ramifications for the sculpting of a new country and what happened to England after that. He is coming from money, being in a time where there was a very much of a social elite. If you weren’t a part of that, then chances are you were poor or indentured in some way. They would’ve known that, and they would’ve had a huge sense of us and them, and just not caring about anything else. When you then put that into public life, it’s incredibly potent and incredibly dangerous. You don’t know where or what a character like that will necessarily do. He looks after himself, he looks after his own, and will probably give lip service to a lot of people that are either under him or work for him. But that may be just about it. Life is very cheap to someone like that.

Is there a real danger of Jamie losing his land? Would Tryon truly take it back? Can he?
Absolutely anything is possible, and that’s the danger. The excitement and the intrigue is you catch him on a bad day and he probably could just say, “Yep, it’s gone.” Or say the wrong thing or not do what he wants to do — he wouldn’t think twice about kicking people off their land and if people died, people died. I don’t think it would bother him. He would just see it as a business deal, and he would then give it to the next person that’s in line. He would purely see it along those lines; anything humanitarian wouldn’t really cross his mind. I don’t think he would do it too blasé, because he knows the Frasers and the Scots are very powerful and have a tightly knit bond, and it may cause more trouble. It may cause more trouble than it’s worth, and it may ignite something further.

This season is based on the novel The Fiery Cross, and that titular moment plays out in the premiere, which I think could be quite polarizing because of the contemporary connotations of the moment. What were your thoughts or response to it?
When I heard about it, obviously your thoughts do go to a modern interpretation of it because that’s where your modern sensibilities take you. You hear it and you think that can only mean one thing. But I think they have, especially in the first episode, they’ve dealt with it very nobly and truthfully within its original context, within the context of that historical moment and what it means. A lot of bad things come out of things that have been manipulated for their own end. It certainly has been warped by certain factions. But I thought it was dealt with very well, very beautifully, very honorably, and with a lot of knowledge as to what this means and what this signifies. I think hearing about it is probably worse in this instance. The truth of it that you see up on screen, I think, is very well done.