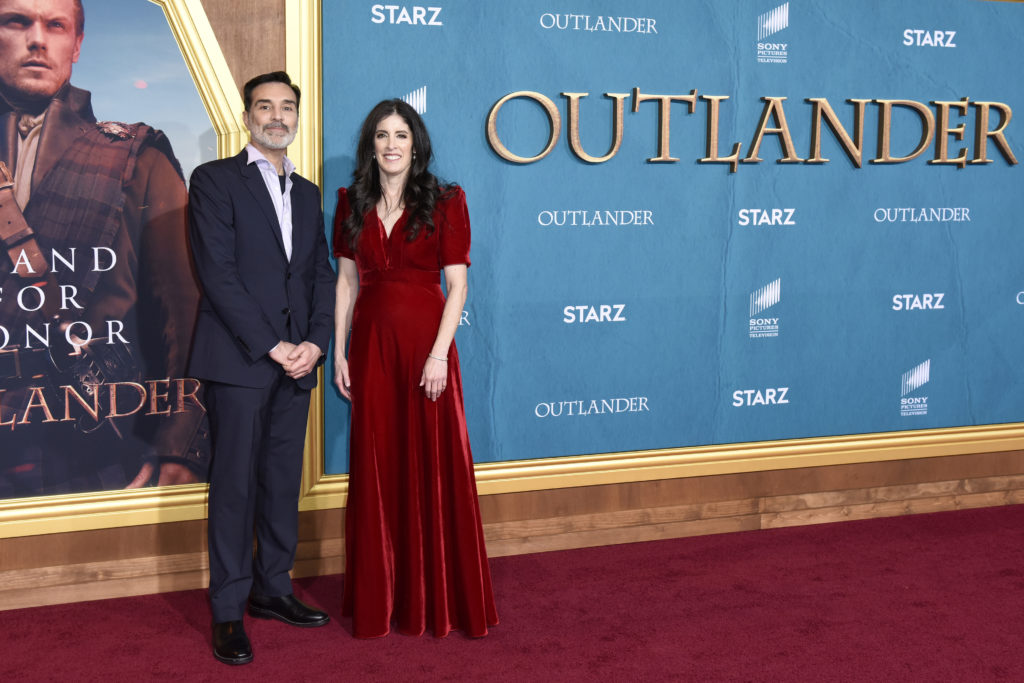 Entertainment Weekly posted a new interview with executive producer and showrunner Matthew B. Roberts about Outlander season five.  He discussed the wedding, The Big House, comparisons to the books, and their version of the calling of the clans.  Excerpts are below, but head over to EW to read the entire interview.

“I’ve seen a few people on Twitter saying, ‘Hey, that looks like a big house,’” admits executive producer Matthew B. Roberts. “If we built it to the actual size, we could get the actors in there but we couldn’t get any cameras or crew.”

Was the wedding true to the book?
It’s true they get married! But it doesn’t happen in the same way and it doesn’t happen at the same time. We made a conscious decision to do it in an Outlander television show way, making it big and grander and cinematic. In the book, Diana [Gabaldon] has this beautiful way of describing things and then you get to create that in your head. But to translate that to screen… sometimes the descriptions and the adjectives in the book are unfilmable. So we have to create our own themes and that’s always a challenge because, as we know, there are 30 million fans who create 30 million different images of things and you can’t ever do it 30 million ways. So we have to kind of pick the way and go for it.

It must be really annoying to constantly get that question, how it compares to the book.
It’s been happening for five years and I don’t think it’s going to stop, but what we always say is, we tried to be true to the material. We keep the plot of the books, but we cannot recreate individual scenes because those are, and I say this a lot in different interviews, the reader of the book is the casting director, is the director of photography, the director. They are the editor. They get to do all of it. We are doing that for them on the show, and that’s where you get that little [feeling of] “Oh, that’s not how I imagined it.” We’re getting that already. When Jon Gary Steele designed the big Fraser house, I saw some that were like, “Oh, that’s not what the way I pictured it.” I’ve fallen in love with the big house. And I think when looking at images of the time, of the period and what houses looked like, you hope people respond like, “Okay, yeah, I can see this.” The house has to look good on camera, and it also has a function. If we built it to the actual size, we could get the actors in there but we couldn’t get any cameras or crew. So anytime you see a scene where it’s just Jamie and Claire, there’s another 15 people standing just opposite them with two cameras, directors, supervisors… a lot of people. I think Gary and his team did a fantastic job of creating something that’s very functional but also looks fantastic on camera.