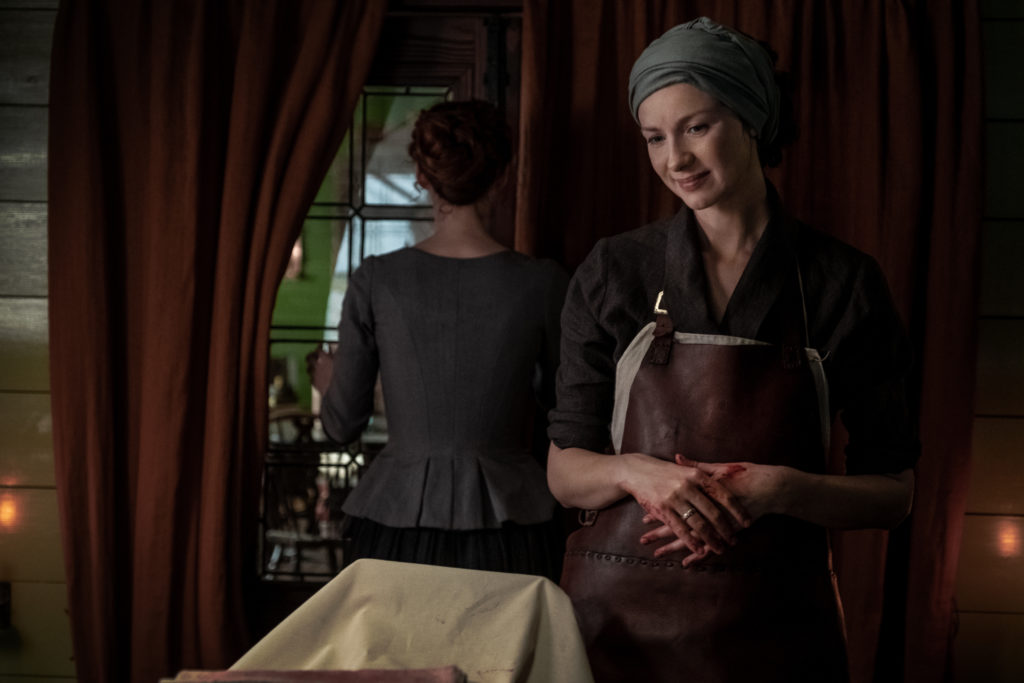 Episode 502 of Outlander, “Between Two Fires,” is only the second episode of season five and some fans are already questioning the motives of the writers in depicting their favorite characters.  Toni Graphia and Luke Schelhaas wrote the script for “Between Two Fires.”

I did not write the review for this episode, but I still had thoughts about what Claire did in this episode.  Specifically, not burying a man to use him for teaching Marsali.  Claire used Roger to hide the body as they filled his coffin with rocks before his burial.  There was no embalming during this time, so as soon as the man died, decomposition really cannot be halted.  I am assuming that this episode is taking place in the spring or summer, so freezing it really isn’t a possibility either.  The smell, you guys, could not have been hidden.  Also, the act itself was not something I could ever see Claire doing; it seemed out of character for her.

I also questioned the whole baking bread, and a lot of it, for experimentation with mold to create penicillin.  Yet, Claire covers the pieces of bread with glassware, which is sure to slow the growth of mold.

Book readers, seeing the trailer for this episode, became concerned that Marsali was being substituted for Malva and the repercussions of this change.

Some also voiced concerns about Murtagh being involved in the tar and feathering of the men.

Author Diana Gabaldon responded to tweets about some of these concerns, and they are below.  I also included a Facebook post from Theresa Carle-Sanders (Outlander Kitchen) about the bread.

Can’t do that. Not because I don’t know 😜, but because the show folk don’t-want- you to know. https://t.co/M4JoYtnhsJ

Yes, I told them. https://t.co/RHzacizbZW

I like your phrasing. <g> It allows me to say that the answer is no. #itsalongbook https://t.co/spyTNp9fZq

She _didn't_ diagnose him with monocular vision in the show–she did in the book. As to why, you'd have to ask the writers. https://t.co/x2oIJsKYNi

Well, I do have a LOT more room than the show does. https://t.co/0WoVGdqaAc

I really doubt it. https://t.co/dHIYyzpPg8