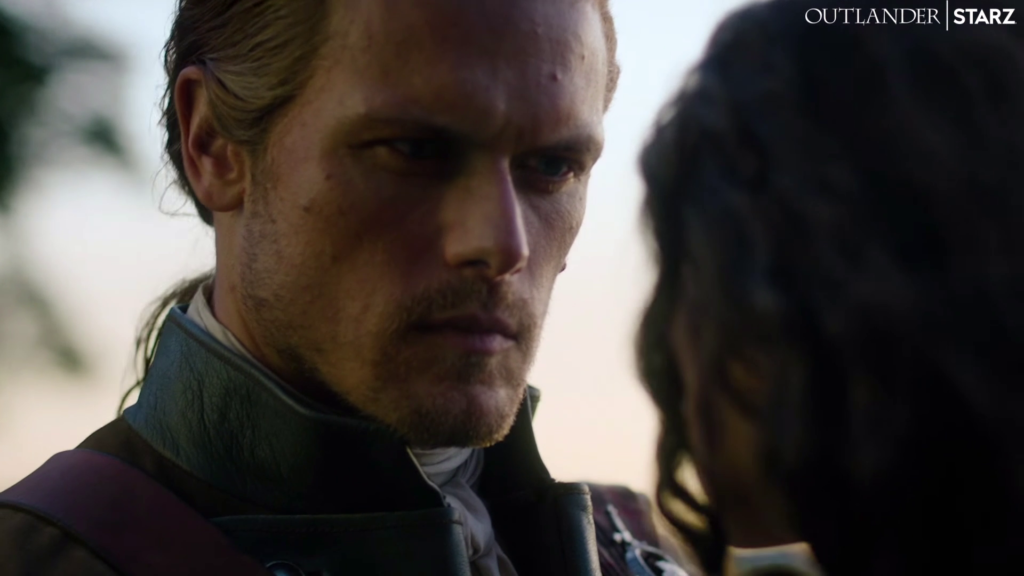 Sam Heughan talked about life, Outlander season five, and his other projects with Ruben V. Nepales of the Philippine Daily Inquirer.  Mr. Nepales is a member of the HFPA and was one of a number of the foreign press who spoke with Sam and Caitriona Balfe.  Below are excerpts that are related to Outlander, but head over to the Philippine Daily Inquirer to read the entire article.

“The first episode is going to be for the fans,” Sam Heughan said about Season 5 of his hit time-travel drama series, “Outlander,” where he and Caitriona Balfe play Jaime and Claire Fraser, respectively.

“It gives the fans a moment to enjoy spending time with the Frasers and the extended family,” added Sam, dapper in a navy Armani suit, complete with a pocket square, in this LA interview.

“The wedding episode gives them time to wallow in that. But of course, things go downhill pretty quickly, so they get a little breathing space before we get into the drama.”

Looking boyish with his short blonde hair, Sam grinned as he dished about the wig his Jamie character wears. “I didn’t wear a wig on the first two seasons, or a season and a half. My hair was dyed. I eventually had so much dye that my hair went purple. So we wigged it, which has been great.

For the fans of “Outlander,” one of the big “reveals” in the new season’s trailer is the sight of the Scottish Jamie wearing the red coat of—gasp—the British Army. “It’s a bit of a spoiler,” he admitted. “That is such a huge moment because of Jamie’s history and his past. That uniform stands for everything that he has fought against.”For Sam, Jamie’s evolution in the Starz series keeps him engaged. “The show is constantly changing. I’m not stuck playing the same character. He has all these great responsibilities now. He feels the weight of that.“I would like to emulate some of Jamie’s qualities. He’s very loyal and quite stubborn. The love that Jamie has for Claire—it would be amazing to find something like that myself.”

As Sam pursues film projects, he knows that he has at least one more season of “Outlanders.” Starz has renewed the show for a sixth season. Still, Sam wonders. “I do sometimes think, what am I going to do when it is over? I think I will actually be quite upset and sad, and it will be a great loss.

“I probably will always have Jamie Fraser with me at some point, even when the show is over.”