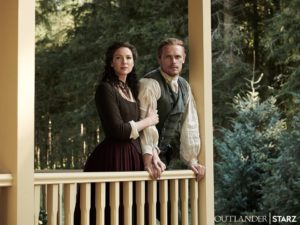 Writer Tara Bennett recently expressed her gratitude in an exclusive Parade interview to Outlander stars Caitriona Balfe and Sam Heughan for taking time out of their busy schedules to be interviewed for her new book The Making of Outlander: The Series: The Official Guide to Seasons Three & Four for seasons three and four.

“As it is with all lead actors in a television show that’s over four seasons, it gets harder and harder to get them, because they’re really busy, and when they’re on breaks, they’re doing other projects. But they have always made time to say, “Yes, I’m going to talk with Tara,” and so I’m always super grateful because, at the end of the day, there is no companion book of value without the two of them. Claire and Jamie are the books, and so, I would’ve really been devastated if we hadn’t gotten them”

Tara Bennett also emphasized in her interview the priority she placed on making sure her book had content savvy Outlander fans had yet to see or experience.

“We tried to put in as much new stuff as possible, otherwise why bother buying the book? I literally made a huge Excel spreadsheet of what was given to press, and then what was given to us, and then made sure that we leaned into those things. If there was a beautiful picture that STARZ and Sony gave the regular press, it was still nice to be able to find a way to feature it, so that you could really look at it in a different way than looking at it on your tablet or your laptop.”

“Sam has some really great stories about the hesitancy of that, working with the little boy that plays Willie, his son, and creating that rapport. Then several of the actors also talk about watching him with the young actor and how endearing that was. I think that’s just a nice testament to both of them as actors is the level that they go to, to try to create the authenticity with Jamie and Claire.”

While Diana herself was busy working on writing the highly anticipated ninth book in the series, the Outlander author made time to do co-signings of Bennett’s behind-the-scenes book. Producer Matt Roberts completed the foreword for the current edition of Outlander: Behind the Scenes.

“But the nice thing is, she announced that she’s going to be doing episode 511. She’s writing that one, so I have a hope that if this book does well, then she will be back in the next tome, which is great.”