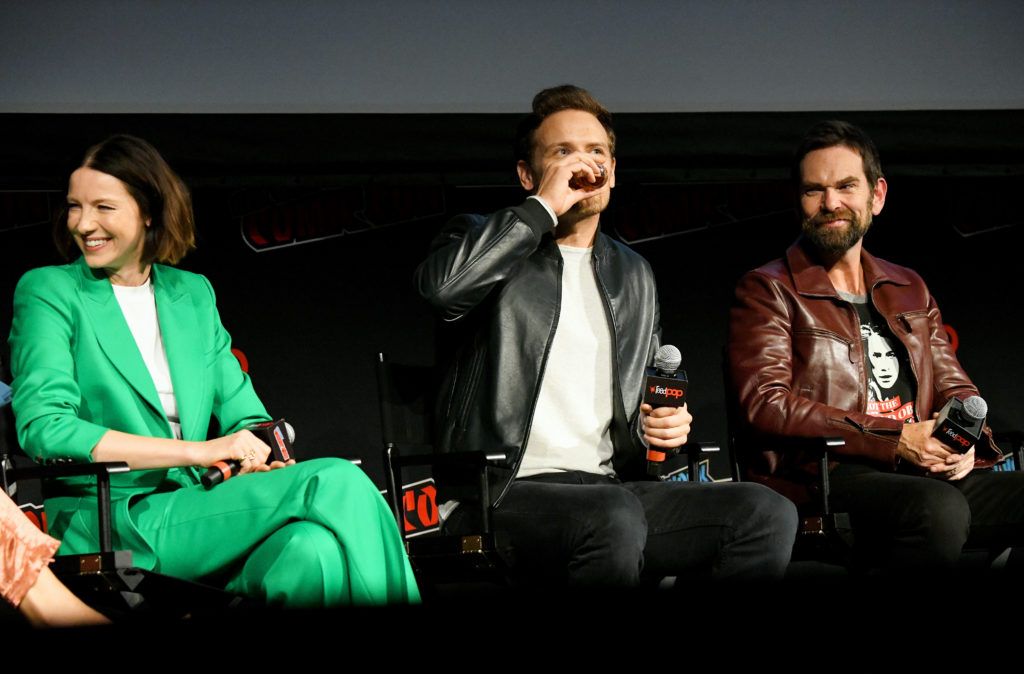 Amidst the hustle and bustle of the crowded New York City streets last Saturday, there was a beautiful oasis of Outlander fans eagerly awaiting their favorites to hit the stage at the Hulu Theater.

You know a panel is bound to be good when there’s at least one marriage proposal, gorgeous cosplay creations, and awkward question whiskey shots!

The Outlander New York Comic Con 2019 panel already had a marriage proposal before the cast hit the stage. Notable absentees that were present last year included Richard Rankin and Sophie Skelton. Thankfully they were there in spirit (literally and figuratively) answering questions from Outlander fans and raising a glass all the way from set.

Am I the only one who’s had a flash pan moment where they think, “Wow, Sophie’s British accent is outstanding?” And then are hit with the fact that, “Well perchance it might be because she’s, well, you know, ACTUALLY British?”

The moderator Ginger Zee did a great job hosting the cast and crew and was clearly a big fan of the show herself. The entire panel consisted of Caitriona Balfe, Sam Heughan  Duncan Lacroix, David Berry, Maril Davis, Ron Moore, and of course Diana.

And yes, Caitriona OWNED that accent challenge. I volunteer to be camerawoman for next year’s panel and I swear upon pain of death I will not have the camera angled away from Caitriona’s face when she’s pulling off a flawless New York accent that had the entire audience in stitches.

I do so solemnly swear.

What has struck me both times I’ve attended the NYCC Outlander panel is the sheer sense of camaraderie present in addition to the utterly devoted dedication of the fans drinking in every word the cast and crew has to say. The panel went by faster than my fingers could tweet, but I continue to be amazed not only by how genuine the Outlander cast/crew appear, but more so by the passionate fans who arrived at that venue coming in from all walks of life.

Here’s to the fans who kindly guarded my seat when I kept attempting to sneak closer to get better pictures. (And kept getting thwarted by a security guard just doing his job, reminding me that I had to TAKE A SEAT.)

Here’s to the woman behind me in the question line dressed to the nines in a spectacular and what appeared to be handmade Claire cosplay. The Q&A session might’ve ended before they even got close to our part of the line, but I appreciated the cosplay queen. I hope the cast saw her when they looked over our way.

Here’s to the women who cheered when a fan thanked Caitriona for being an inspiration as Claire. (Another woman said reading the books inspired her to become a trauma nurse herself!) Another lady even apologized for being a fan that had initially misjudged Caitriona when she was cast as Claire, and said the actress had blown her away.

While the romance in Outlander is without a doubt a huge draw, my heart was thrilled by all the women telling Caitriona and Diana how much they had been motivated by Outlander and Claire’s journey.

“It has to end sometime right?” One fan asked somewhat nervously, sensing the audience’s hackles rising at the mere suggestion. (It was a well intentioned question to be fair to that poor fan.)

The audience roared in response with raucous applause.

Until next time Outlander fans! Season five or bust! 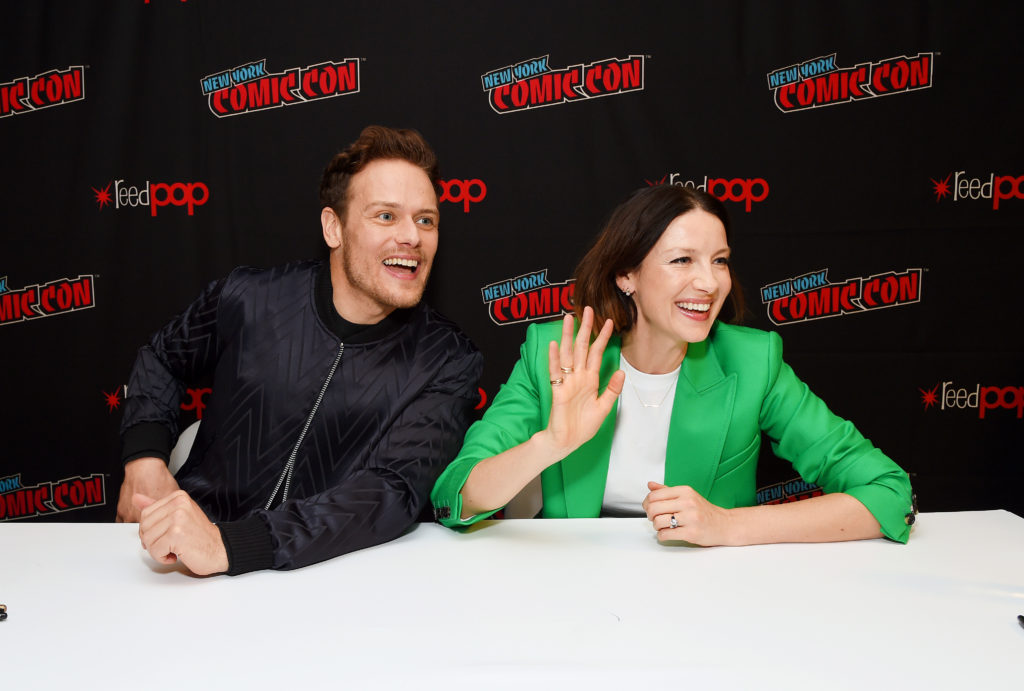 Video and photos courtesy of Starz