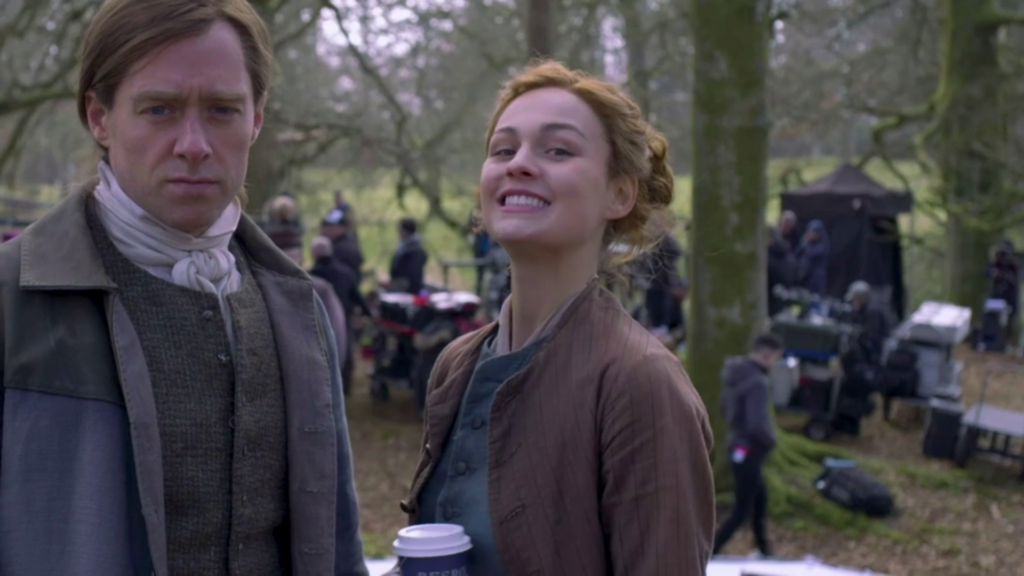 So Brianna didn’t slap Jamie during their big fight in the book! Skelton elaborates on the show specific slap.

“The absolute gravity of the comment he’d made about calling her a whore when she had just said that she’d been raped. It’s not totally Jamie’s fault, and in those days that would be the attitude, unfortunately. But I also think, when we’re talking about modern women, I think it relates back to today whereby people say they’ve been sexually abused and people don’t always believe them and try to find fault.”

I really respected Sophie Skelton’s dedication to researching what actual rape victims experience post-trauma. Nobody condones slapping someone else, but Brianna had not only experienced the whiplash of traveling back in time but being brutally raped on the same night she got married.

“With Brianna [during the rape scene], I played something called “tonic immobility,” whereby your body completely cops out on you and you essentially go numb. Victims who experience that don’t feel the trauma at the time, and that actually means that 50% of them have worse PTSD because they experience the trauma later. So I think something grave needed to happen in that moment, to really land on how vile Jamie’s statement was….She goes on a bit of a tirade. She’d been verbally slapped, so she just kind of reacts.”

Please tell me after all the time travel trouble Brianna has been through that her baby is Roger’s.

“That’s always the challenge of Outlander. [Roberts says] One of the big things we talk about on a daily basis is, “Yeah, but will someone who’s never read the books going to understand that?” Because we get it, we’ve read the books. The people who know and love the books fill in the gaps. Then you get someone who’s never read the books who reads it and goes, “What? I don’t get how Jamie did this or Claire did that.” You’ve got to make that person understand, too. So it’s a really delicate balance of not insulting the fans who know everything, but then not ignoring the fans who don’t.”

Check out the full interview at https://ew.com/tv/2019/07/09/outlander-brianna-slaps-jamie-season-4/