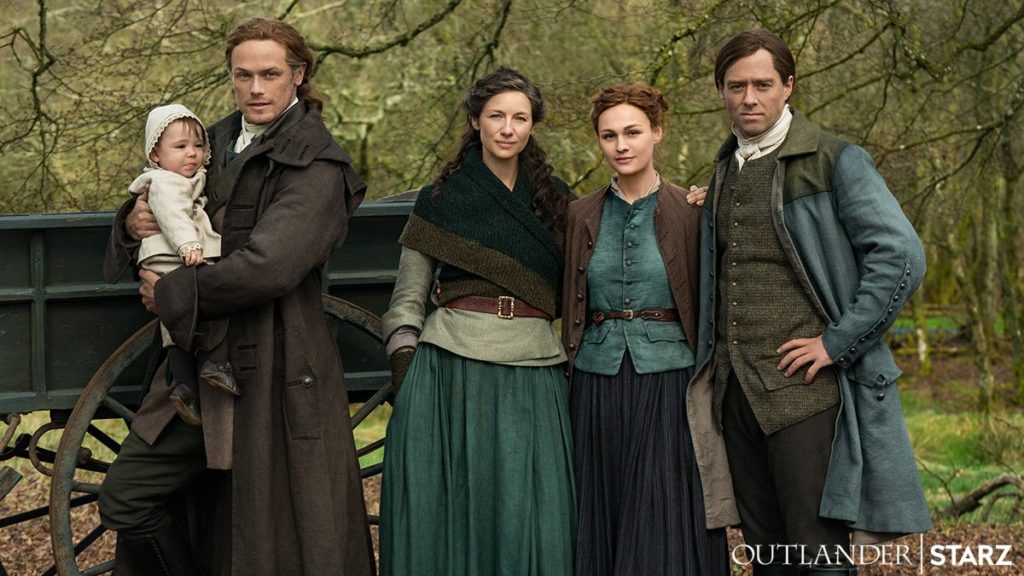 One of our favorite interviewers, Tara Bennett, spoke to the Outlander cast at the Starz FYC event this past Sunday.  The article has quotes from interviews with Sam Heughan, Richard Rankin, and Sophie Skelton as well as quotes from the panel.  Excerpts from the interviews are below, but please head over to SYFY Wire to read the entire article.

Sam Heughan: “As we saw at the end of Season 4, he made a deal with the Redcoats and it’s the wrong side,” the actor says of Jamie’s predicament starting Season 5. “But, I think [otherwise], the characters feel settled. Fraser’s Ridge has flourished and they’ve really established their roots. You see how Jamie has built this incredible main house, and his family, and extended family, are living around him now. He’s become — without meaning to — the honorary clan chief. It’s a lot of responsibility, not only for his family, but his tenants, and everyone who lives in the area. With that comes responsibility, and that’s where he’s got himself into a problem.”

Richard Rankin: About how faithfully the show is sticking to those events, Rankin would only tell us: “It’s all very early stages in terms of the adaptation. I know they’re compressing a lot of stuff but keeping the essence of it quite similar. Adaptations are always going to be tricky, especially with book five. There’s quite a lot of it in the first part. There’s too much to transfer over to television anyway; half the season would be gone with just the Gathering alone. But they are doing a great job with it.”

“The babies that play Jemmy,” Rankin adds, laughing, “They have vocal cords and a pair of lungs on them.”