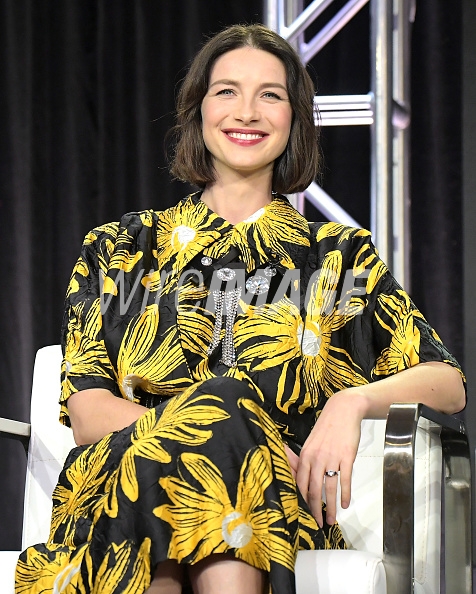 Season four just ended at the end of January, but it is full steam ahead for the cast and crew of Outlander.  With both season five and six being picked up by Starz, they are all preparing to go back to Scotland to start filming season five.  I know the crew is already back preparing to film already, including Jon Gary Steele and his crew working on the “big house.”  Caitriona Balfe was a part of a panel at the TCAs this week and spoke with some journalists afterward about season five of Outlander.

Are you in the middle of season five now?

Caitriona Balfe: “We have not started shooting yet. We are going to start in a couple of weeks so I’m here for the rainy season of Valet and then I’ll go back to a rainy season in Glasgow.”

Have you seen any of the scripts yet?

Caitriona Balfe: “I’ve seen some outlines but no scripts as yet.”

Is there something from the fifth book you’re really excited to act out?

Caitriona Balfe: “Yeah, there’s a lot. I still don’t know exactly what is going to end up in the show but like I said, there’s a lot of also Claire as last season, her doctor side in some ways is put to one side. We got to see little glimpses of it. I think now that they’re going to settled in Fraser’s Ridge, it’s a real opportunity to establish herself in getting that kind of professional side of her life back in an order that is very fulfilling for her. So I think that’s exciting too.”

Why is it important to tell realistic stories about both sexual violation and sexual pleasure? And we talk about safe spaces. What is it like as actors?

Caitriona Balfe: “First of all, telling Claire’s sex life through this female gaze or the sex that Jamie and Claire have, it’s very important to who they are as a couple. And that’s an important, I think, aspect of the story. I think the sexual violence is also an important part of the storytelling if you’re going to tell the real life story of what was going on in that time in that place. We have a responsibility I think to try and do it in a responsible way and to try and give agency to the characters that are being victimized. And I think we’ve done a pretty good job in not just showing the act but then in the repercussions. I think that was so important in Briana’s story this season that we get to see the long lasting effects of what happens when you’ve been raped and how that affects not just the person, but also the family.

So yes, it’s definitely a part of the book series and so therefore it’s a part of our show. It’s in the DNA of that but I think we all spend an awful lot of time trying to do it in the right way. As actors, from very early on, Ron Moore was very clear that he wanted to do this in a different way. He didn’t want to do your typical TV sex and he wanted to make it from a female perspective so that automatically puts you in a much safer space. And then it’s a continuation of conversations and making sure that every time one of these scenes come up, it’s not just like oh, well, you guys do that so we’re just going to do the same thing again. Every single time is a new conversation because how you feel about yourself and your body and where you’re at, it changes from day to day, month to month. You have to constantly make sure that everybody’s comfortable and okay with something that’s going to live on the internet or in pictures or on video for the rest of your life.

We’re very lucky that we have an open dialogue with our producers and our writers. It’s very important to keep that open and keep it a strong conversation.”

#TCA19 @Starz @CaitrionaBalfe #Outlander Says: it was a short time from landing role of Claire to when I started shooting. Each character determines the work you do. The joy of doing TV is you get multiple seasons to layer experiences for characters.

#TCA19 @Starz @CaitrionaBalfe #Outlander It great that this character has resonated with people. It's cool that people come up to me and tell me how much they love the show. I was really lucky to get a job, I was broke and needed the work.

#TCA19 @Starz @CaitrionaBalfe #Outlander Q&A after panel… We start shooting season 5 next week in Glasgow. S5 will deal w/ family loyalties and politics. I am learning a lot about American history. Also Claire (now 54) exploring life as an older woman and being a grandmother.

#TCA19 @Starz @CaitrionaBalfe #Outlander Q&A after panel… Jamie and Claire's marriage deepens in season 5. She will also establish the professional side of her life, as a doctor. Also… Sex is very important to them as a couple 🙂