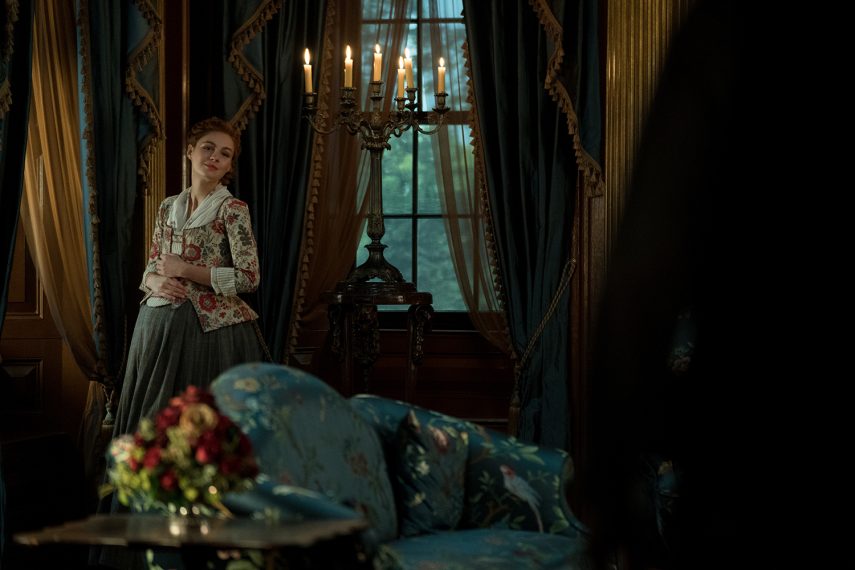 TV Insider released a story yesterday about being on set during filming of the Outlander season four finale.  It gives certain clues to what fans will be seeing this weekend when it finally airs.  Proceed with caution if you would rather not be spoiled.  Excerpts from the story are below but head over to TV Insider to read it in its entirety.

“Bree doesn’t know if Roger’s alive, if her parents are alive,” says Skelton, who’s dealing with a painful side effect of her mini-marathon: the blisters that come from ye olde footwear. “Giving birth without her mother there is something she’s very afraid of and sad about. Jocasta has become a mother figure, but Claire is the only person Brianna can talk to about her fears of having a baby, and everything else.”

Months in captivity witnessing horrors and suffering abuse has damaged Roger both in body and spirit. But on set, a cheerful Rankin, dressed in rags and smudged with dirt, confesses he’d be fine with even more bone-shattering stunts than the storyline has required. “Roger’s [been] dragged about, went over a few cliffs. I threw myself around a fair bit, but not as much as I would have if given the opportunity,” he says. But no matter how bad things get, “He just can’t tear himself away from the thought of reuniting with Brianna.”

“He’s on a quest to win back her trust and love,” says Heughan. “He promised Bree he’ll save Roger. He can’t come back empty-handed.” Jamie, who was raped by sadistic British Army captain “Black Jack” Randall in Season 1, “sees himself in her,” Heughan adds. “They’ve both been through a trauma.”

Even if the Fraser family finds peace and togetherness, the world around them stands on the brink of turmoil with the American Revolution about to begin. Jamie’s godfather Murtagh (Duncan Lacroix) is a leader of the Regulators, the future revolutionaries, and his involvement puts the Frasers in the crosshairs. “They know this war is coming, bigger than anything. It is slowly thundering in the background,” Heughan says. Make that the foreground: Across the field from where Skelton is shooting, three horsemen in British army redcoats practice for a jaw-dropper of a scene. Sums up Heughan, “Dare I say, this finale is the strongest we’ve had.”