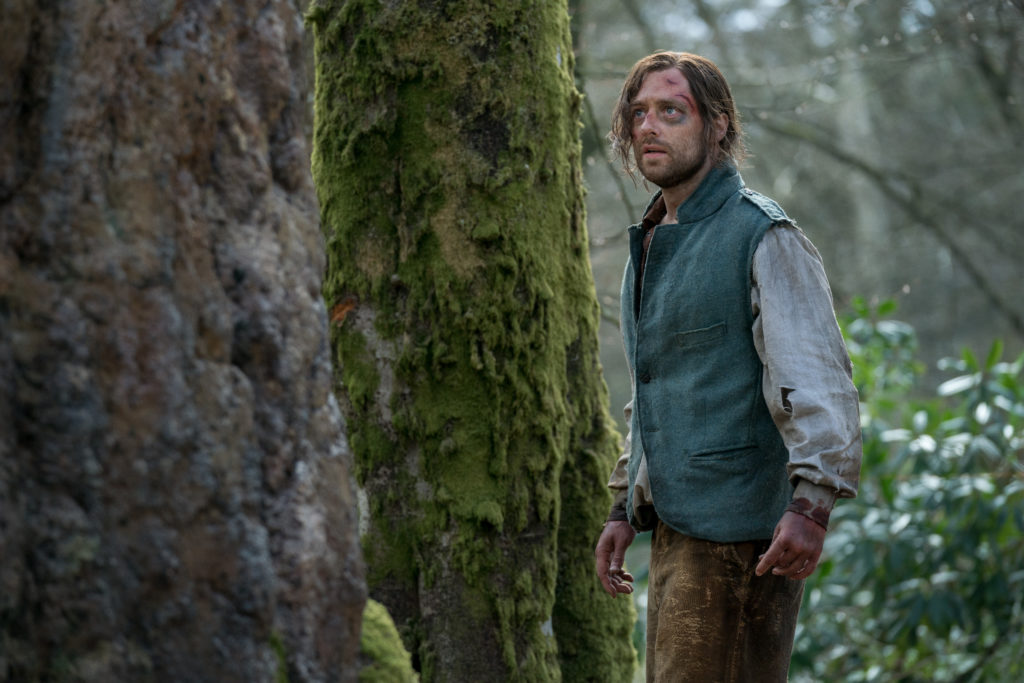 TO A MOHAWK TRIBE.

I mean I’d be totally okay with that if he had sold Stephen Bonnet to the Mohawk.

Although I’m not sure I’d trust Bonnet anywhere except SIX FEET UNDER.

JAMIE THAT IS THE WORST LIE IN THE BS BOOK, AND YOU KNOW IT.

Papa Jamie tries his hand at reverse psychology when Brianna finally tells him she feels like she could’ve done more to fight Bonnet off. Maybe she LIKED IT, he insinuates.

Brianna has yet to fully fathom her father. She clearly didn’t see what her papa did to her beloved in the name of her honor last episode. Jamie grabs her and asks if she’d be able to fight him off.

‘No,’ she says, the realization dawning. There really was no way she could’ve fought off Bonnet. Jamie sweetly tells her she was courageous just by surviving.

(I also loved the cute bit before where Jamie states confidently that he would travel FORWARD in time just to tell Roger he doesn’t deserve his daughter. I could literally see him doing that.)

Brianna asks Jamie if he tried to fight Black Jack. Jamie didn’t have a choice. He’d do it again, anytime to save his Sassenach.

Brianna is like, ‘Maybe it’ll make me feel better if I kill him.’

Bless her heart. (And I don’t mean that ironically.)

YOU GO FOR IT GIRL.

Jamie gives a look like, ‘This was not in the papa parenting book oh god.’

There are far better things for a father and daughter to bond over than trauma.

(I realized I have stated this already but I AM STILL PROCESSING IT OKAY?)

Roger is determined to survive. In spite of everything he wants to get back to Brianna. How on Earth can he escape?

I know this is an impossible decision, but I do want you to know that it is an option.

Brianna has to decide quickly if she wants to keep her baby or have Claire perform an abortion while it’s still safe. Our ginger princess has another option: return to the future while still pregnant.

The most important thing is that Brianna has a choice.

Time is of the essence. 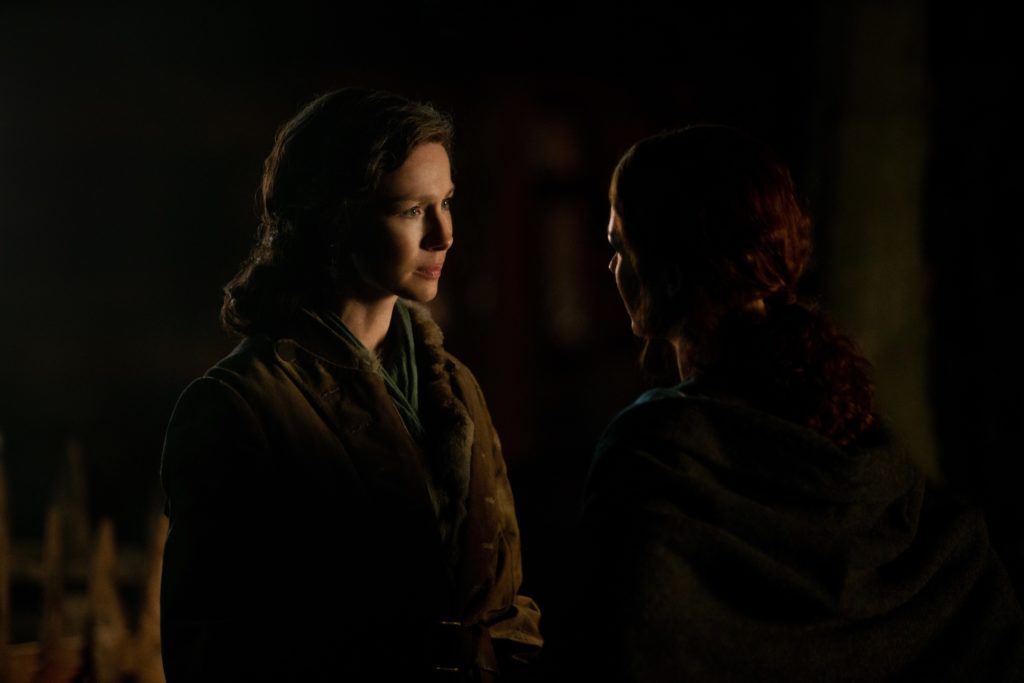 Jamie teases Brianna about Young Ian’s crush on her. Brianna, of course, is like, ‘Ew, FAMILY MEMBER REMEMBER?’

‘She’d grow roots here if she could!’

Brianna notes that HER FATHER Frank said the same thing about Claire. She’s happy that her mother seems genuinely happy and isn’t alone. Jamie feels guilty for Claire coming back to him and leaving Brianna alone.

The way Sophie Skelton delivered that line was perfect. That’s the reassurance Jamie needed at the moment.

I really enjoy the quiet scenes of Fraser family life. Unfortunately, it won’t last for long.

However, we’re gifted with the cute moment of Brianna and Claire talking about things they miss from the future. Claire not knowing who Led Zeppelin is cracked me up.

BRIANNA FINALLY FIGURES OUT LIZZIE’S BIG MISTAKE. (After having a horrible PTSD induced nightmare that I have NO desire to recount!)

To say all hell breaks loose would be the understatement of the 18th century.

Jamie, a tad confused, jumps to the WRONG conclusion when Brianna explains that she wanted to go to bed with Roger. Brianna is crushed he would even think she would lie about being raped and slaps him.

‘I WAS violated you self-righteous bastard! By someone else!”

Some daughters get the same shaped nose from their father. Brianna got Jamie’s temper.

‘You’re nothing but a savage.’

Claire and Jamie have had some pretty epic fights too. But Claire is so different from Jamie that it’s like they balance each other out even in their fighting styles?

The nonverbal communication between Claire and Brianna in this scene is pique mother-daughter love at work. Brianna silently assents to Claire revealing to the two men in the room who raped Brianna. Claire lays down her recovered wedding ring in front of Jamie, and he knows immediately.

Young Ian finally admits he SOLD ROGER TO THE MOHAWK. Brianna slaps him too. Jamie, angry with himself, throws a piece of Fraser furniture in frustration. (How’s that for alliteration?)

Brianna’s line reminded me of a terrible day I had last year. Someone I had known for several years, confided in and leaned on had totally broken my trust and had left me alone in a parking lot. I cried yet felt numb, sad and foolish.

In an uncharacteristic move on my part, I saw the person who had betrayed my trust again within thirty minutes and told them I knew they had lied to me and had broken my heart in the process.

That person did not look me in the eye and shut the door in my face.

My therapist laughed when I recapped my terrible day. Aren’t you supposed to feel all sad for me and tell me what a good person I am and that you’d travel in time to tell that person that they didn’t deserve me? I wondered.

‘I’m so glad you had a chance to get mad at that person!”

I have not and never will be like Brianna. I prefer to express my emotions through writing (can’t you tell?) Expressing anger, even in a moment of being completely blindsided, was a foreign concept to me.

‘Didn’t it give you a feeling of control over the situation? Yes, what happened was bad, but you allowed yourself to get angry. You had a chance to tell them exactly how you felt. And you chose to take that opportunity.’

There is nothing wrong with being sad and depressed about a traumatic or heartbreaking situation. I am so glad that this show does not ignore what happened to Brianna and the repercussions her horror has on the entire Fraser family. What Brianna needs is fuel to light her fire again.

At this point, Brianna cannot kill Bonnet right away. But she can tell her father that she doesn’t have the right to be as angry as she is about Roger’s fate.

For all Brianna knows Roger could be dead. He could hate her guts and never want to talk to her again. All that matters at the moment is that Brianna is pissed with a purpose.

Brianna commanding her family to find her husband is exactly the dose of fire the doctor ordered for our ginger princess.

Meanwhile, poor Roger is getting a great view of 18th century America. I’m pretty sure this isn’t the sightseeing trip he wanted to sign up for.

Young Ian is like, ‘Yeah, they probably won’t kill him if he’s of use to them. At least that’s what the Cherokee told me.’ He does have a necklace from the tribe he received in exchange for Roger so he declares they can and will use that to track the tribe down.

Brianna is like, ‘Hell no I’m coming with you two.’

Everyone is understandably like, ‘A lady with a baby on the way might slow things down a smidge.’

Claire confirms with Brianna that she truly wants to keep the baby. Brianna is determined. The baby might be Roger’s. Even if it’s not, she’ll still love him or her anyway.

That’s right kids; the withdrawal method is NOT 100% full-proof!

All joking aside, I really do hope it is Roger’s baby.

Brianna begs her mom to follow Jamie and Young Ian. She astutely points out that Roger is less likely to flee from the men who beat him and sold him to the Mohawk if he sees Claire.

Claire reluctantly agrees only when Murtagh volunteers to take Brianna to the safety of River Run.

Jamie requests that Murtagh brings Stephen Bonnet to him. While I am all for Stephen Bonnet being killed in the WORST WAY POSSIBLE, I think it’d be great if Brianna were able to complete the deed. Again Jamie has good intentions with trying to avenge his daughter’s honor, but now it’s also a matter of pride with him clearly.

Young Ian’s little head nod like, ‘Hell YES we’re going to kill Bonnet’ was adorable. I just wish these men would realize Brianna isn’t a fragile flower and she deserves a part in this plan. Again it’s a matter of remembering that they are indeed men of the 18th century.

Ian adorably proposes to Brianna to make up for SELLING ROGER TO THE MOHAWK. Jamie quashes his proposal dead.

Papa Jamie swears to Brianna that he will bring Roger back. He is clearly still angry at himself, but he owns up to what he did and promises to make it right for his daughter.

He looks her right in the eye and gives her his word.

Kudos to Richard Rankin for making that water streaming from the falls look like the best tasting water in the history of ever.

The following case is a great example of dramatic irony. You want to cheer for Roger escaping, but then you realize….

No! Roger’s escaping! Just wait, Roger! Help is on the way. Might take a few months. Or more. Just WAIT okay.

Meanwhile, Murtagh and Brianna arrive at River Run. We are blessed with Ulysses’s dulcet tones once more.

Jocasta and Murtagh are super cute together? Murtagh introduces Brianna.

Jocasta welcomes Brianna with open arms. She’s going to try to get Brianna married off, isn’t she?

HE FOUND STONES. YOU KNOW, THE TIME-TRAVELING ONES THAT BUZZ LIKE BEES.

AND HE JUST HAPPENS TO HAVE HIS, ‘GET OUT OF THE PAST FREE’ GEM STONES.

Although I doubt Roger will go back to the future, I don’t blame him for contemplating the possibility? You can see his anguish over the fact that he’s even considering leaving Brianna.

I JUST WANT EVERYONE ON THIS SHOW TO BE HAPPY OKAY.

What did you think Outlander fans? Is Roger really going to leave for good? Is the baby Roger’s? Will Brianna be happy under Jocasta’s wing? Will Jamie kill Bonnet?

Are there really only three more episodes left?