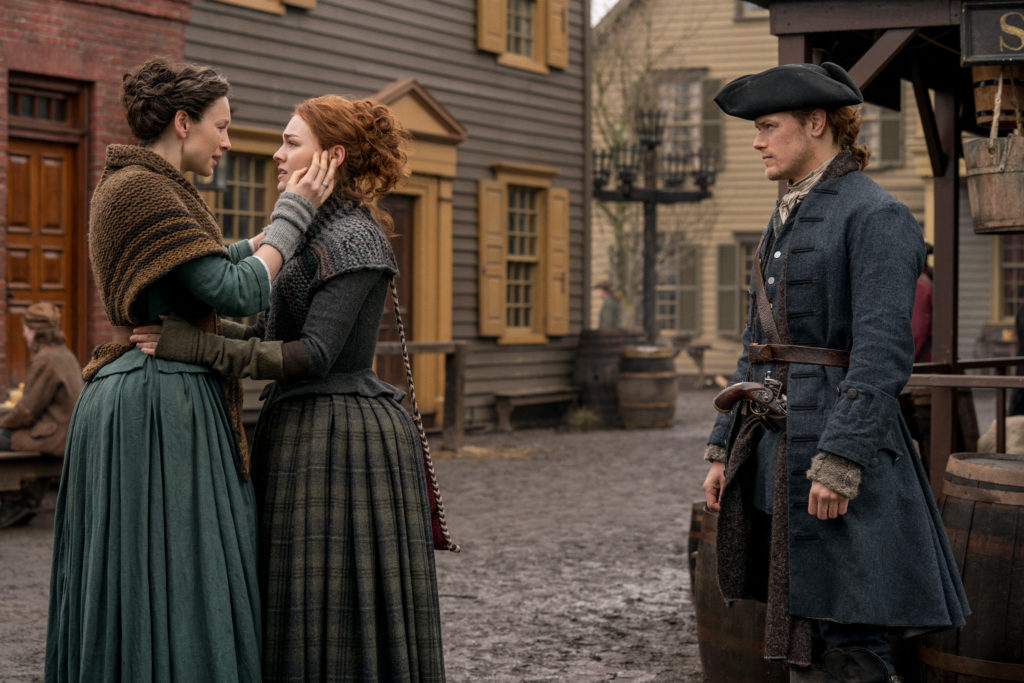 In Which the Thing Everyone Wanted to Happen Finally Occurs

Paging Doctor Claire! Your daughter is in need of a serious dose of TLC.  STAT.

Brianna returns to her shared room with Lizzie, understandably not wanting to talk about the fact that she was brutally raped.

In spite of her questions, Lizzie doesn’t need Brianna to confirm anything. She can see for herself what happened to her mistress.

Lizzie is the audience, horrified as Brianna takes off her clothes, blood staining areas that clearly indicate she was raped.

Ye have my hand here, and my ear if you need it.

The episode hasn’t been on for FIVE MINUTES, and I’m already near tears. Roger goes to look for Brianna and runs into how-can-I-be-MORE-of-an-asshole today Stephen Bonnet.

Bonnet forces Roger to return with him to the ship bound for Philadelphia. Roger tells the innkeeper to tell Brianna that he was looking for her.

Of course, Brianna slept past noon and missed Roger’s text. The service isn’t great, and she can’t get a message back to him in time. The Gloriana is gone.

Thankfully Lizzie (who has been ill apparently) greets her mistress with a spark of good news. Brianna’s father happens to be conveniently nearby!

Honestly, it does seem a tad too conveniently timed, BUT THAT IS OKAY BRIANNA DESERVES THE GOOD NEWS.

And can I say how much I love how devoted Lizzie is to Brianna? You can tell she’s thrilled she found Jamie for her mistress.

OF COURSE, BRIANNA MEETS HER LONG LOST FATHER WHILE HE’S TAKING A PISS.   What a great way to make a first impression on your daughter James Fraser!

Brianna puts her hand on Jamie as if to make sure that he’s real.

All jokes aside, their eagerly awaited reunion is the sweetest thing I’ve ever seen. Sophie and Sam were fantastic playing off each other. You could feel the mixed emotions they were experiencing; joy, uncertainty, insecurity, happiness, fear, and genuine love.

Brianna finally weeps and hugs her father. I’m not going to quote anything else from this amazing scene, so you have no choice but to rewatch it a million times. You’re welcome.

What was even more heartwarming was the look on Caitriona’s face when Claire saw her daughter again, pure, unadulterated joy.

Finally, Brianna has hope again in the form of family, except for the whole I-came-back-to-warn-you-two-that-die-in-a-fire thing. Jamie is like, well we’re not dead yet, so come to Fraser’s Ridge!

When it comes to you Auntie Claire, I learned it’s best not to ask too many questions.

Young Ian just rolls with the fact that Jamie and Claire are with their long-lost daughter. He’s like, ‘Cool, a new cousin!’

Lizzie’s crush on Young Ian is so cute. I can ship it.

Brianna recaps all of the last episode to Claire that she missed except the last ten minutes. Claire can easily tell that Brianna loves Roger before her daughter even mentions they were handfasted. It’s so lovely to see these two together again and witness how their bond has grown since season two.

Our poor ginger princess discovers who her rapist was, thanks to Young Ian. He tells her what Stephen Bonnet did to them the last time they were journeying down the same river. Brianna puts two and two together. You can practically feel her heart drop to her stomach.

We don’t have much luck, changing history in the past Claire.

Mark me, Claire, I think your husband has a point.

I LOVE how Brianna’s response to Jamie showing her the magic of their Fraser’s Ridge land was to say how it reminded her of Daniel Boone.

What took ye so long lass?

I love how Jamie can’t stop looking at her, just in awe like

That’s right; I made THAT.

Brianna remembers to remind Young Ian that his mother wants him to write more often! It’s nice to see the Frasers finally host a peaceful dinner. Murtagh gleefully tells the story of Jamie’s first kiss, and his mention of Dougal made me miss Graham McTavish!

Claire can tell something’s wrong with her daughter when she barely bats an eye at Claire’s mention of her meeting with George Washington.

Brianna reminds Murtagh of Jamie’s mother. I cry again. Jamie feels like Brianna is still a bit of a stranger to him.

Doctor Claire is like, ‘Yeah Lizzie might’ve been suffering from malaria but no worries I GOT THIS.’ Lizzie is even more of a badass than I thought! Looking out for Brianna and recovering from Malaria!

Brianna tells Claire that Frank knew she went back to Jamie.

He always knew my heart was here.

I love that even through the quieter moments of this episode, we are not allowed to forget what happened to Brianna. Sophie’s little detail of putting her wrist up to her nose as if it was still bloody was a nice touch. Brianna is suffering, but she won’t allow herself to acknowledge her feelings.

Time passes at Fraser’s Ridge. Part of me wants to enjoy Fraser family bonding time, but the other part of me is like, How on earth is she explaining her absence at MIT? Did she pay off her classes? IS GAYLE OKAY or is she having to cover for her roommate by being like, ‘Brianna WHO, professor?”

Jamie is SUPER impressed that Brianna can shoot a target better than he can.

Where did ye learn that?

Claire suggests that Jamie take Brianna out on a father-daughter trip, a la what he did with William three episodes ago.

It means my darling.

Papa Jamie is SO happy Brianna is out hunting bees with him. Brianna looks adorable in her hunting outfit, but remains a bit distant with Jamie (Also I love curly haired Brianna! Why is it that her curls look better conditioned than mine and she’s in the 18TH CENTURY?)

Brianna spots a bald eagle. I didn’t catch the symbolism in that scene AT ALL.

I dinna wish to replace your father. He was a good man. You’re my flesh and blood. Since ye returned to me, I’m finding you’re my heart and soul as well.

Brianna and Jamie finally open up to each other. Brianna admits she feels disloyal to Frank just by spending time with Jamie. Jamie says Frank was a good man, to raise Bree even though she wasn’t his flesh and blood.

Aw. Poor Jamie doesn’t want Brianna to go back. Claire points out that there are more opportunities for their daughter in the future.

Claire FINALLY asks what everyone has been wondering. There’s something else bothering Brianna besides Roger.

Claire asks if she and Roger thought to use protection and Brianna gives the greatest god-mom-how-EMBARRASSING eye roll of all time. There’s that feisty girl we know and love!

I didn’t fight him hard enough, why the hell didn’t I?

I love that Claire was fully prepared not to judge Brianna for sleeping with two men.

Brianna finally breaks down to her momma Claire that she was raped. Claire holds her close, assures her it wasn’t her fault, and I break down in tears.

Our ginger princess is convinced Bonnet must be the father. Claire looks ready to kill a man.

Claire tells Jamie that Brianna was raped and is now pregnant. Claire better hurry up and kill Bonnet because Jamie might just beat her to it.

The following scenes present a case of the worst miscommunication of all time.

Lizzie spots Roger nearby Fraser’s Ridge and reports his presence immediately to Jamie. Indignant on her mistress’s behalf, she tells Jamie about the state she saw Brianna in when she returned from her day with Roger.

Jamie asks if she is certain that Roger was the man who raped Brianna.

Lizzie is certain. Jamie makes Lizzie and a quite confused Young Ian swear themselves to secrecy.

Meanwhile, Brianna makes Claire swear that she won’t tell Jamie that Bonnet was her rapist. Jamie’s daughter was afraid he would blame himself if he found out Bonnet was the man who violated her. Claire is not comfortable with keeping it a secret, but she agrees.

Meanwhile our poor victim of the Fraser family’s inability to communicate is nearly beaten to death by his father-in-law. Poor Roger!

Young Ian stops Jamie from killing Brianna’s husband. Jamie orders Ian to get Roger out of his sight.

But where will Ian take our poor Mackenzie?

A wise man once wrote the course of true love never did run smooth.

Is Brianna ready for pregnancy and motherhood? Is Roger going to pull a Frank and raise a child that may not be his own? I CAN’T HANDLE THIS.

Until next time fellow Outlander fans!

“Jamie and Claire keep secrets from one another as they try to help Brianna process her recent trauma. But the secrets they keep cause a bigger familial rift once they are revealed and Brianna learns of a terrible misunderstanding that has had disastrous consequences for Roger.