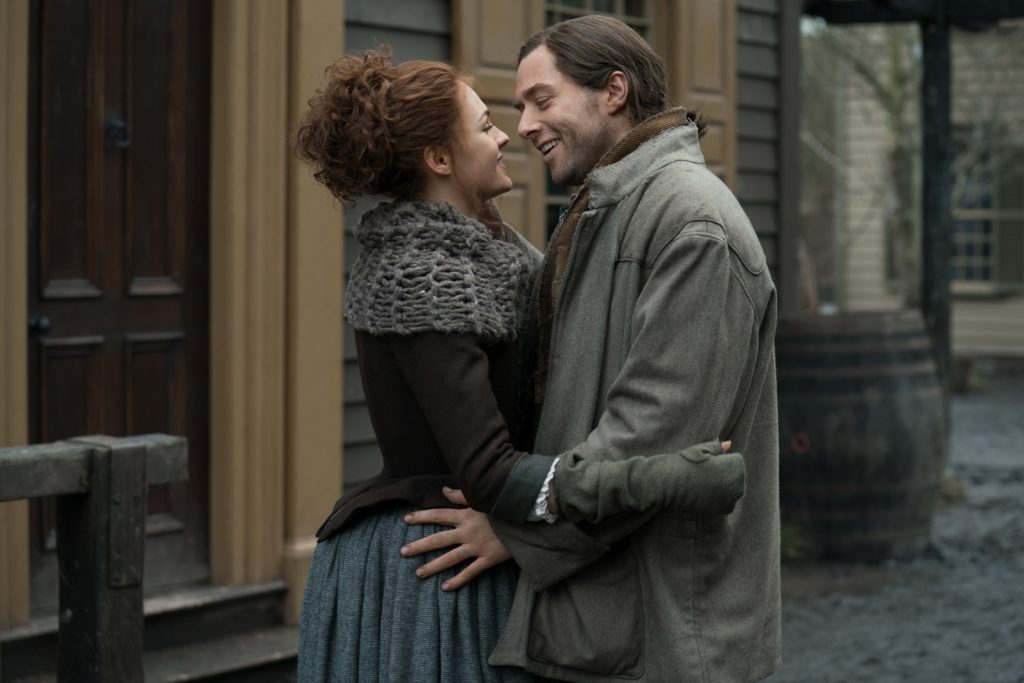 Sir, have you seen this lady?

In which our poor beautiful ginger princess experiences both the best and worst day of her life in the SAME 24 HOURS.

And on that happy note, lets recap shall we?

I wonder how long Roger’s been in Wilmington searching for Brianna. More importantly…

WHY HASN’T HIS BEARD GROWN BACK YET?

I thought ship journeys over the Atlantic were supposed to take months y’all.

Roger asks a tall Frenchman if he has seen his ginger princess. Sadly, Fergus has not seen her.

MARSALI GAVE BIRTH ALREADY? JUST HOW LONG HAS IT BEEN SINCE THE LAST EPISODE?

That’s one quibble I have with the past two episodes. The timeline is super unclear. I just want to be completely present for Brianna and Roger’s time in the past!

I am here for Claire and Jamie being cute grandparents to baby Germain. Marsali is so happy it warms my heart. 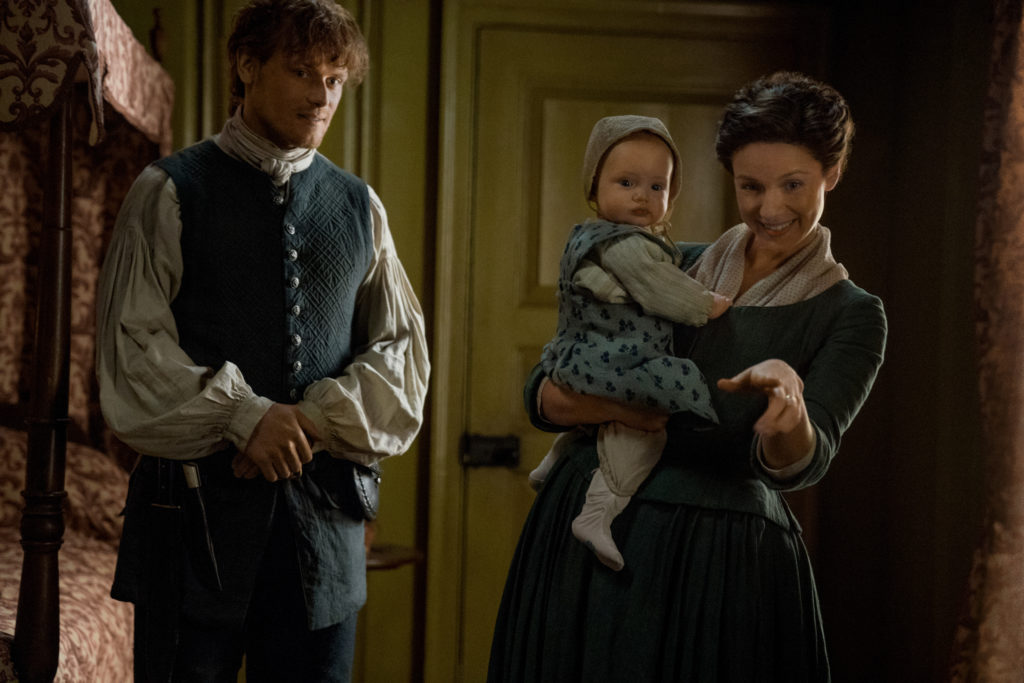 Marsali confides to Claire that she would die before letting anything or anyone hurt her baby. Claire responds that that’s the hardest thing about being a parent: letting go of the fact that you can’t protect your child from everything.

This quote takes on a horrible meaning later in the episode.

ROGER AND BRIANNA LITERALLY TAKE AN EPISODE AND A QUARTER TO DO WHAT TOOK HER PARENTS NEARLY A WHOLE DAMN SEASON.

How could I say no to a man who pursued me for 200 years?

Brianna confesses her love to Roger. Deep in the throes of passionate young love, the two find a private area where Brianna informs the Jolly Roger that she’ll marry him.

Roger explains the concept of handfasting and Brianna agrees to the ceremony. They make out some more. Kids these days!  Er, those days?

His doctor had assured him that his undiagnosed hernia would just go away. Claire, of course, offers to examine him to confirm her qualified medical professional suspicions.

I have a feeling Fanning’s stubborn choice not to take Claire’s advice will come back to bite him.

Claire geeks out while conversing with Washington and I love her for it.

If Brianna were here, she’d have a hundred questions to ask him!

Don’t you worry your pretty curly haired head Claire, your wee daughter is just off doing things with an older man.

I do wish we could’ve seen a bit more development as to why Brianna finally accepts Roger’s marriage proposal when she was dead-set against it several episodes past. Is she truly at ease with it, or is she just caught up with Roger’s ultimate grand gesture? That’s why I wish the timeline was a bit more clear, tThough I will readily say that their handfasting ceremony was adorable.

Brianna’s lady Lizzie is understandably concerned that Brianna has yet to return after seemingly being grabbed by an angry man hours earlier.

It’s the beard that made him look trustworthy I reckon.

Tryon is indignant that the Regulators are planning to take his house away. How dare they want to stop him from building a palace!

Jamie listens to Governor Tryon’s plan to arrest the Regulators he knows are waiting to ambush him outside with unease. You can feel his stomach drop when Tryon states that he knows that Murtagh Fitzgibbons is the ringleader.

Feel my heart? Tell me if it stops…

I love that Brianna’s hair is all askew in its curly glory during her sexcapades with Roger. Of course, she has an amazing time losing her virginity, but is perplexed as to why Roger seems like he’s been clubbed in the head with a baseball bat.

I am a surgeon your excellency, and I cannot wait.

Fanning’s hernia turns out to be a real showstopper.

I LOVE when Doctor Claire orders everyone around. Tryon pompously doubts Claire’s abilities, literally costing Fanning precious time that he doesn’t have to spare.

Jamie talks to Mr. Washington outside, and our future first president offers him a ride. Jamie wisely accepts. Take notes on your ride choices, Roger.

Claire is OVER Tryon’s sexist doubts over her medical abilities. She wisely notes that if he is roused back into consciousness, he’ll likely respond better if he sees Tryon at his side.

Is there a war I’m not aware of?

Oh Mister Future President, you have no idea.

Claire’s surgery is a success. When the other surgeon arrives, Tryon is like, ‘Don’t be such a sexist d-bag. Can’t you see she’s fixed him?”

Murtagh’s plan to rob the redcoat’s coach is stopped just in time by Jamie via Fergus. It’s a bittersweet reunion, but it’s nice to see Murtagh genuinely happy to see the young French boy he once knew.

Brianna and Roger’s sweet wedding night is ruined when it finally dawns on Brianna that Roger knew about her parents’ death notice and didn’t tell her.

Roger makes the mistake of informing Brianna how he had discussed it with Fiona, and she agreed that it wasn’t a good idea.

Note to Roger. Do not tell the woman who just agreed to marry you that you took the advice of ANOTHER woman not to inform her that her mother would die in a fire, especially when you forget to mention that Fiona has been a whole-hearted supporter of your union.

No one is stopping you.

Tryon suspects that Washington was probably the man who tipped the Regulators away from his scheme.

Oh Tryon, you have no idea.

Poor baby Brianna gets her clothes back on, wiping her tears away.

The following scenes are among the worst I have ever seen on this show.

Brianna hasn’t quite adjusted to the idea that she can no longer walk around alone at night.

Emotionally worn out, she wanders into a tavern and is pulled aside by Sir D-bag McF***er himself.

He asks her to blow on a very familiar looking ring to give him luck. Brianna realizes immediately that it’s Claire’s ring. She asks Bonnet if she’s still alive and offers to pay for the ring. BONNET LURES HER INTO A PRIVATE ROOM AND BRIANNA NAIVELY FOLLOWS.

What follows next is absolutely horrible. The only thing worse than Brianna’s screams for help is the fact that nobody in the tavern cares.

Afterward, BONNET MCF***ER acts like it was no big deal. He stole Brianna’s innocence and makes sure to give her Claire’s ring in return.

The look on her poor, bloodied face sent chills down my spine.

She hobbles out, traumatized with Claire’s ring.

Ultimately, what is devastating is Brianna’s silence.

Brianna has a spirit of fire just like her parents. She talks. She gets angry. She is not the meek and obedient type.

And he could care less.

Bravo to Ed Speelers for giving Tobias Menzies a run in the why-hasn’t-their-character-died-a-horrible-death department.

Please don’t tell me she gets pregnant from her first two times having sex.

I’m not sure how I feel about Brianna being raped so horribly and so soon after her experience with Roger. Of course, it does effectively show the audience that life back in the past isn’t going to be all pancakes and syrup. But seeing Brianna traumatized in such a way was horrific.

I always thought Outlander did a fine job of handling any character’s rape with dignity and allowed each character a chance to process and acknowledge their feelings of trauma. Poor Brianna has been through hell and back and she hasn’t even found her parents yet!

Please give Brianna something good next episode! I don’t have enough whiskey for this!

What did you think Outlander fans? Until next time!

“As Brianna struggles to compartmentalize the trauma she’s suffered in the wake of the tragedy that befell her in Wilmington, she refocuses on finding her parents and hits a stroke of good luck, discovering that Jamie and Claire are in town as well. The newly reunited family returns to Fraser’s Ridge, where Jamie bonds with Brianna, until dark secrets threaten to tear the Frasers apart.”