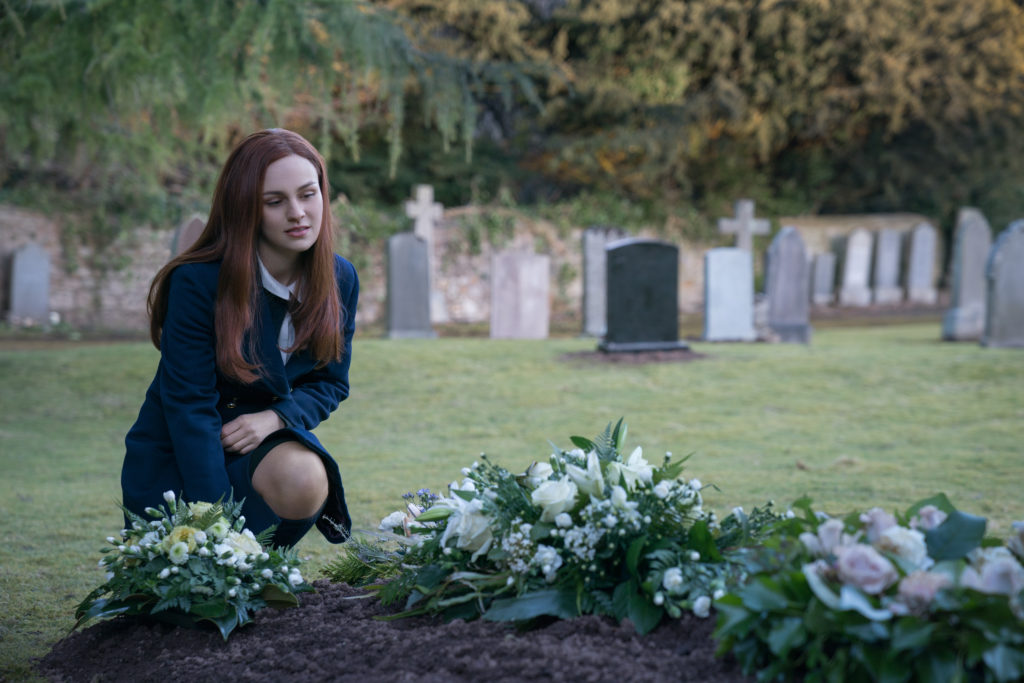 Clearly, Claire didn’t get the memo that a peanut butter and jelly sandwich is an essential must-have for any time traveler.  Our ginger princess and her protein-packed sandwich make it back successfully to 18th century Scotland. Sadly taking her car was a no go.

Brianna is truly and utterly alone. It’s impressive seeing her make her way through the rugged terrain on her own. Unfortunately, the landscape gets the best of her and causes our ginger princess to take a tumble and wound her ankle. She soldiers on bravely.

Time is not a reality; it’s a concept or a measure.

Roger drives through the same mountains in the present day, only linked to his Brianna through the now familiar violin melody playing softly during the transition between the two centuries.

WHY IN THE HELL DID HE SHAVE HIS BEAUTIFUL BEARD?

Well for your sake, I hope time travel is a reality. Otherwise, you’ll have shaved your beard for nothing!

Roger bids the fabulous Fiona farewell and makes his way to the stones, hearing the buzzing, and he’s-

Transitioned over to poor weary Brianna. Our ginger princess eventually passes out from exhaustion.

BRIANNA WAKES UP FROM HER WONDERFUL FRANK FLASHBACK IN THE LION’S DEN.

THIS EPISODE HASN’T EVEN BEEN RUNNING FOR FIFTEEN MINUTES AND I’M ALREADY STRESSED.

LAOGHAIRE IS SWEET TO BRIANNA, AND IT’S NICE TO SEE THIS SIDE OF HER? Brianna is surprised that she enjoys roasted pigeon. Laoghaire insists that she can stay as long as she needs.

Ian the Elder (we missed you, Steven Cree!) reluctantly hands Laoghaire less than half the alimony Jamie promised her. Not surprisingly, this infuriates Laoghaire.

I love the transitions between younger and older Brianna. It adds a great new layer to her character. She remembers that big fight Claire and Frank had last season after Claire’s graduation party.

The next day Laoghaire apologizes to Brianna for the scene last night. Will she continue to be sweet and motherly to Brianna when she finds out who her mother is?

You’re nearly the same size as my Marsali!

Brianna helps Joanie with the garden and Laoghaire’s youngest child astutely notes that Jamie didn’t love Laoghaire the same way she loved him. Brianna makes the apparent connection between Frank and Claire.

Hearing his voice again made me cry. Frank is drunk and alone in his office when Brianna confronts him. Frank is an inch close from telling Brianna the truth, with the Wilmington Gazette RIGHT IN FRONT OF HER.

Laoghaire continues to be sweet and motherly to Brianna but shows a flash of the Claire-hating woman we know and love. I mean, it’s hard not to be sympathetic to her in spite of everything.

I believe genuinely superior writing has you seeing both sides of the story. Yes, Laoghaire still blames Claire for EVERYTHING, but honestly, can you blame her? Jamie agrees to marry her, helps raise her family, and all of a sudden that woman shows up after twenty years and he goes to her without a second thought?  Of course, none of this is Claire’s fault; it’s Jamie’s for being an idiot and marrying Laoghaire because she was a comfortable and safe choice when he thought he would never see Claire again.

That’s right, I said it.

Roger and Brianna are both looking to hitch rides to America.

Of course, Roger finds the most terrible 18th century Uber on the planet.

Stephen Bonnet tells Roger he’s not taking anybody else aboard his ship.

Your hands are better suited to writing letters than sailing.

Listen to the evil bastard Roger! He’s doing you a solid!

Bonnet finally accepts Roger as a crewman and hopes that Roger’s lad will be worth the journey.

Don’t you hurt my bearded angel, you bastard!

Laoghaire FINALLY finds out who Brianna is.

It sounds as though he’d never leave you by choice, only by God’s hand.

Bless Brianna’s heart. She still doesn’t get it.

Honestly, the scenes Brianna share with Frank are utter perfection. It’s so nice to see Tobias again, and it’s evident in these scenes how much Bree adored him. The best flashback scenes add a layer of substance to the present.

Laoghaire suggests to Brianna that there was no room in Jamie’s heart for a bairn and that’s why he sent Claire away.

Why wouldn’t he want me?

I have to find him, even if he is what you say.

Brianna foolishly tells Laoghaire that she can prevent their deaths. Laoghaire is like, ‘Wtf, you are her daughter.’

I love how Brianna stands up for Claire. It saddens me that Laoghaire goes straight back into Claire-hating mode after we saw a gentler side of her character. Brianna is horrified when she realizes Laoghaire is the one who tried to get Claire burned at the stake.

It’s easier than facing the truth that Jamie never loved you.

Laoghaire goes full-on wicked stepmother mode and locks Brianna in her room, threatening to have her arrested for witchcraft.

Brianna remembers when Frank tried to convince her to go to Oxford with him.

Your mother and I had a plan a thousand years ago too.

Brianna is understandably shocked by Frank’s declaration about his divorce from Claire. He tells her, “I love you,” and Brianna doesn’t respond.

She later tells him her regrets at his grave.

Roger watches Bonnet go from being a sweet baby cuddler to a captain who will throw a young girl overboard because she has smallpox.

Bonnet commands his men to bring anyone on board with a rash to him. Roger vows to protect the young mother with a baby covered in a rash that the mother insists has nothing to do with smallpox.

Joannie ends up helping Brianna escape. She’s like, “It’s not your fault your mom is an evil witch!” The shot of Joannie and Brianna arriving at Lallybroch didn’t make me cry at all. Nope. I am a soulless heathen.

Of course, Bonnet catches Roger giving the mother and child rations. He flips a coin to determine whether Roger should live or die for stealing rations for two people. Thankfully it’s Roger’s lucky day, and Bonnet storms off when it lands on the side that says he shouldn’t have him punished.

Brianna is stopped by a desperate man as she makes her way to buy passage to America. The father begs Brianna to take on his daughter as her servant. He explains that it’s either Brianna or a terrible man that will marry his Lizzie no matter what.

Brianna books passage for them both, moved by the father’s plea.

As they walk outside to board the ship, Lizzie’s father calls out for her not to forget her prayers. Brianna and Lizzie both turn around, and that’s when I lost it.

There stood Frank, Brianna’s father, happily waving her off to her journey.

Brianna nods to him, and Frank breathes a sigh of relief. It’s like he wanted to make sure she’d be okay.

Our ginger princess resolutely makes her way to the ship, a triumphant variation of Frank’s theme and Lizzie following right behind.

Just because Jamie is Brianna’s father by blood does not stop Frank from being her father by bond.

What a superb episode. Kudos to writer Shannon Goss for not bringing Frank back frivolously. His appearance in the episode added a new layer to Brianna’s character and helped her move forward.

Sophie Skelton was faced with a daunting task of carrying an episode on her shoulders, and I thought she delivered a great performance. Nell Hudson was also absolutely fantastic, presenting us a multi-faceted Laoghaire we could feel sorry for, but able to switch back to Claire-hating lass in half a second.

I’m excited and slightly nervous how the inevitable first meeting between Jamie and Brianna will go. Will Roger find her in the New World? And for the love of all that is good, please don’t let Stephen Bonnet come between Roger and Brianna reuniting!

I leave you all with one question.

Where is the whiskey?

“Roger’s diligent search for Brianna pays off when he finds her in Wilmington, but their romantic reunion comes to an abrupt halt when she discovers pertinent information that he intentionally kept from her. Meanwhile, Jamie and Claire attend the theater with Governor Tryon, at his request, and discover a plot against the Regulators that tests Jamie’s loyalty to Tryon.”