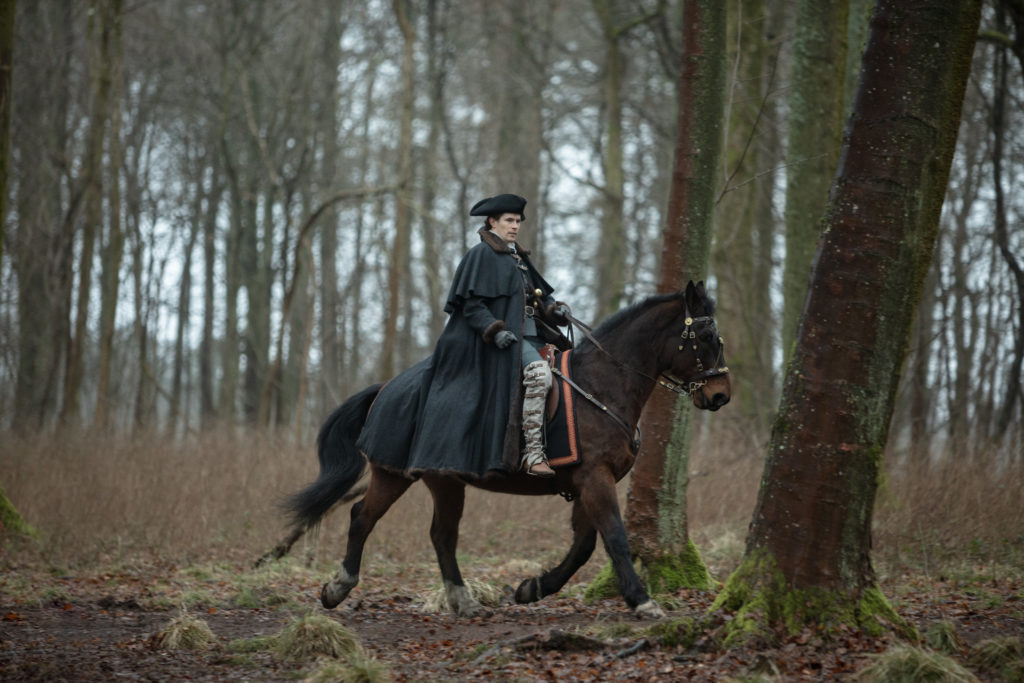 Sure, John. You were on your way to Virginia and just happened to be passing by Frasers Ridge in North Carolina.

Having you here has really made Fraser’s Ridge feel like home.

I would literally watch a full episode of Murtagh and Claire being adorable. My dreams are dashed by JAMIE’S BASTARD SON WILLIAM DISGUSTED BY LEECHES ALL OVER HIS LEGS.

Oh, if only Claire realized who the boy was. Visions of her saying, “WELL YOUR MOTHER WAS A LEECH,” danced around in my head.

And then I remember Claire is a mature and secure, grown woman.

I want to see my father.

She was a kind soul.

Bear McCreary’s childlike melody that accompanied William last season follows the boy around softly in this episode. McCreary’s themes are genuinely perfect and fit each character to a T. Is it too late to ask him to write a melodic theme for me? (Call me, Mr. McCreary!)

Murtagh honors John’s request not to reveal how they met with young William. The Lord seems to have pampered the boy beyond recognition.

Our poor, silver fox can barely hide his disdain hearing of John’s friendship with Governor Tryon.

Where’s the money coming from?

Grey continues to dig himself into a bigger hole with his shovel of privilege.

Perhaps it’s the patriotic American blood in me, but I feel like most would side with Murtagh in this scene. John seems genuinely confused why Murtagh is so flabbergasted by Tryon’s blatant abuse of the colonists’ taxes.

Have you fared well in the New World?

Aye. I have more than rats to eat now milord.

Jamie and Claire can never have a peaceful dinner party, can they? I am Team Murtagh here.

William did remember his Mack! He continues to demonstrate just how privileged his upbringing has been by innocently asking Jamie if he’s the groom of Fraser’s Ridge. You can’t blame William for the way he was raised, but his pomp and circumstance has certainly molded him into a different child than the boy Jamie interacted with at Helwater.

Claire misreads why John made such a detour. He’s not a spy for Tryon, Claire!  Maybe he’s hot for your husband, Claire. Aren’t we all?

Jamie tells Claire a story about young William’s first time with a horse. I LOVE that Claire doesn’t show an ounce of jealousy towards William in this episode.

I’ve been dreaming of a moment alone with you for weeks.

Claire has to be RESPONSIBLE and remind her hunky husband that his guest is WAITING.

I thought you were better than this Claire.

I both love and hate the conflict between Murtagh and Jamie. Hate it because THEY JUST REUNITED AND I JUST WANT EVERYTHING TO BE OKAY.

I love it because this is true to Murtagh’s character. He can’t play the game and pretend like he’s okay with his godson’s choices. I love that he never tells Jamie what Jamie wants to hear. That’s true family and friendship.

Murtagh requests that Jamie essentially spy on Grey and Jamie’s like, “I refuse to hurt my gay best friend who also has raised my illegitimate bastard son.’

And Murtagh is like, ‘Ah. That’s why you’re besties with a man who belonged to a group that SLAUGHTERED EVERYONE WE KNEW AND LOVED.’

Murtagh officially has enough secrets on Jamie to write a book. I have this feeling it would be a bestseller.

I have all a man could want. Home, work, an honorable wife by my side.

And a son. Sam Heughan does a great job of conveying Jamie’s thoughts left unsaid in this episode. You can feel the longing by merely looking at his eyes.

This is truly an episode about what each character yearns for. Jamie craves for his own flesh and blood offspring. John yearns for the love he can never have. Claire yearns for the time John was fortunate enough to spend with Jamie.

John comes down with the measles when he’s just about to depart with William.  Claire frets that William may have been exposed to the same source of the measles and tells Jamie to take him away from the highly contagious Grey.   Claire tells Jamie to keep himself and William away from John for at least six days, enough time to give Grey time to survive or die. Jamie is excited for nearly a week of father-son bonding, but William is just like,

When Jamie finally gets his son out in the woods, he explains to William that they must stay on their side on the boundary marked on the trees. William asks why the savages were allowed to remain on the King’s land and I just cringe with every pompous word he utters.

Oliver Finnegan does a fantastic job of portraying a privileged yet vulnerable William. His actions remind me of his mother’s attitude towards Jamie last season. Holier than thou, yet curious.

How interesting it would’ve been to see how William would have turned out had he been raised by Jamie.

“Have you ever seen such a glorious thing before sir?”

Jamie looks at his flesh and blood in awe and answers, “Never.”

Meanwhile, feverish John Grey is like, ‘Yeah Isobel was totes like a sister to me ya know?” which is a normal thing to say about your deceased wife.

How is it that David Berry looks even more handsome when he’s sweaty with measles? Some people are so pretty it’s unfair.

You’re envious of the fact that I’m raising Jamie’s son, are you not?

Hey, John. It’s probably not the best to insinuate to the doctor keeping you from dying that she might be jealous of you.

I love the dynamic between these two. Both share a common bond of their love for Jamie. John admires how straightforward Claire is, while Claire respects John’s dignity in the face of having to hide his true self.

David Berry obliterates my entire soul with a three-word response.

William continues his adorably annoying pompous streak by asking Jamie why the fish aren’t biting at his fly rod. Jamie continues to cling to the memory of the little boy he once knew.

He teaches William one of the principle rules of hunting. Aim to kill, not injure. William successfully kills a stag, and is like, “You mean it doesn’t magically appear perfectly cooked on a plate?”

“My dad says it always tastes better when you’ve earned every bite!”

William is understandably worried about Papa Grey. He demands to Jamie that he wants to see Papa Grey now.  Jamie sadly tucks him in when William childishly goes to bed. Despite his insistence that he isn’t a child anymore, William is still a young boy fearful of losing his father forever.

Halfway-to-death-but-somehow-still-hot John Grey insists on confessing Claire.  He felt nothing when Isobel died.

I came here to see if I could still feel.

Grey’s sense of refined dignity is utterly shattered by his illness. He tells Claire with some sense of smugness that he could’ve had Jamie if he wanted him.  The look Claire gives Grey at that moment makes me think she’s fighting every bone in her body not to break her ‘Do no harm’ oath.

Meanwhile, Jamie finds that his wayward son has caught a fish, oOn the Cherokee side.

Jamie is like, “Why don’t you just order way too much pizza and take my sports car out for a joy ride like normal sons do?” when they’re beset by Cherokee men.

They demand blood from William for violating their land agreement. Noble Papa Jamie volunteers himself of course. He admits that he’s William’s father.  William finally displays a modicum of maturity and takes responsibility. One of the Cherokee makes a small cut on his wrist and leaves.  Guess nobody has fish and chips for breakfast.  Jamie’s son finally embraces him on his own accord.

Grey apologizes to Claire for being measles drunk. He confesses to Claire that he wishes he could’ve given Isobel the same look of satisfaction that Jamies gives Claire.   Claire confesses to Grey that she felt the same way about Frank. She admits she is jealous of the time Grey spent with Jamie.

William asks Jamie why he didn’t look back at him when he left Helwater.  Jamie never expected to see his son again.

Doctor Claire orders Grey to eat healthily and his face is priceless. Jamie tells Grey that William was courageous and our sad Scot watches his son ride away with his gay best friend.

William looks back at Jamie.

Later that night, Jamie and Claire get so hot they could melt all the snow in Siberia.  But first, Jamie schools Roger in how to give a lady a ring in the midst of a sexually heated moment.

Lo and behold, he bequeaths a ring for Claire forged from one of his mother’s candlesticks. (Time to step your game up, men!) Claire is understandably hot at the collar for her sexy and sweet husband.

Oh, you know what happens next. I won’t recap it so now you have an excuse to watch the ending scene again.

I am all for episodes reuniting us with old friends, especially when it adds a layer of complexity to the time and place Jamie and Claire now live in. John, William, and Murtagh weren’t brought back just for fun. Each interaction adds substance to the story moving forward, and I can’t wait to see what happens next.