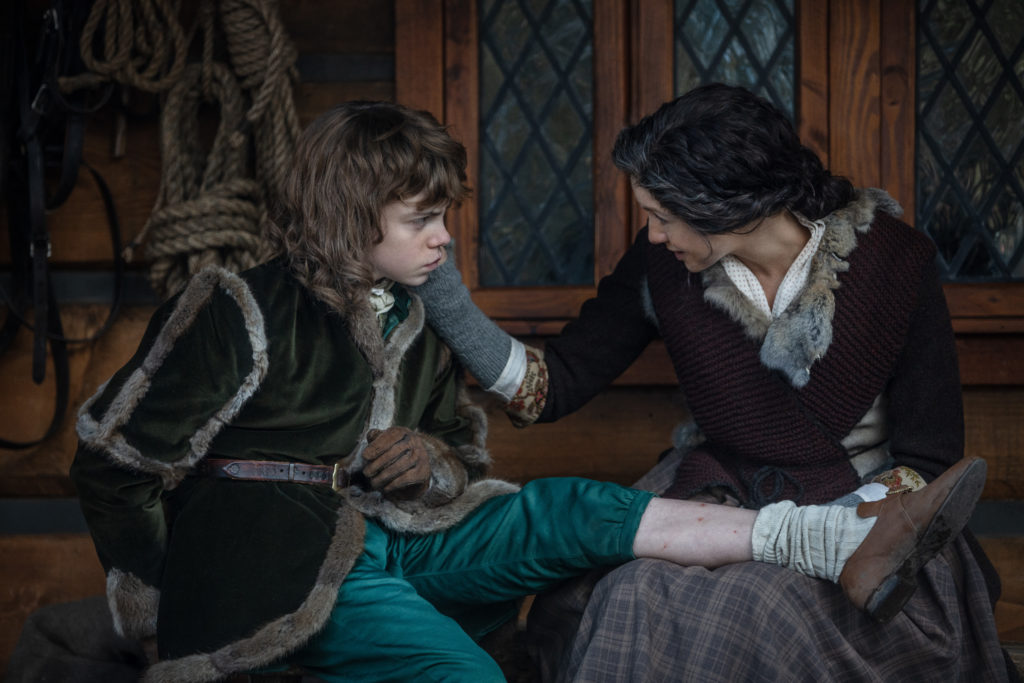 “Blood of My Blood,” the sixth episode of this season, is about endurance and what it means to endure, especially when the body and soul are heightened by love and connection. We see old bonds tested by new circumstances, old feelings rekindled with a glance, and animosity tempered, if not lessened, by considerate understanding.

Director Denise Di Novi and writer Shaina Fewell do a wonderful job of demonstrating not only the power of touch but also what sparks and condenses the air between two people not touching. From the moment when the dashing John Grey rides up to the homestead and gazes upon Jamie sawing wood, all sweat and sawdust and muscle, whatever constraints of formal dress and carriage he puts between himself and his unrequited love are cold comfort, especially when the affection that Jamie has for John as William’s protector brings a welcome pain.

For Claire, who happens upon young William waiting down by the stream, his little legs feasted upon by leeches, the connection between her husband and his former warden is both explicitly seen and innately felt, as she must be indebted to Grey for his generosity but also endure his reasons. Similarly, John sees her as the missing piece that he could never mold himself to become to Jamie, and that happiness he longs for is forever in front of his eyes and just beyond his grasp.

For Jamie as well, seeing his son for the first time in years, now a preteen gaining his share of piss and vinegar, used to the finer ways of the aristocracy but tenacious enough to sleep outdoors and hunt and fish. Even though he has been raised in a different world than Jamie, their shared blood is evident in the way they respond to nature and test boundaries, how they look upon conflicts and fight against restraints. To not confess the truth to his son and embrace him as his own is felt in every grimace the father tries to hide across a campfire, the way he gazes upon the boy wielding a rifle, and the one brief embrace they share when they mutually offer their lives for the other.

Murtagh, here an outsider to the tiny connected group, only feels doubt and suspicion as to the character and motives of the ambitious Redcoat and his relationship to Governor Tyron, and his unusual detour in the backcountry on his way to Virginia. Since his character is still fresh upon book readers and show fans alike, his attitude towards Grey and reaction to Jamie’s trust in him will no doubt resurface in his political involvement with the growing resistance towards Tyron’s policies in the region, and just how Jamie will reconcile his allegiances with both family and friends will undoubtedly be complicated.

The Ridge is not immune to the measles outbreak in Cross Creek, and although Jamie had measles as a child and Claire was inoculated for it, once John displays early symptoms, the group splits to protect William, with Jamie taking his son on a hunting trip while Claire attempts to nurse John through his illness. In both situations, the inherent danger hovers over each pair like a fog, encapsulating them together whether they like it or not, whether in a heated sick room or chilly campsite. Initially, William is hesitant to go off with this mysterious friend of his father, whose tics and gestures bring up tiny sparks in the back of his mind. It is a bittersweet sequence to see Jamie, who knows his time with William is limited and may result in heartbreak if they return and John has died, to teach the boy to take care of himself and display mercy and tenderness towards nature.

Back at the cabin, Claire’s nature as a healer clashes with her need to protect Jamie and defend her position in his life against a man who makes no bones about his desire for her husband but also is in an unenviable state. He cannot live who he is openly, he was an “adequate husband” to the late Isobel but did not share the connection with her that Claire and Jamie have, and by caring for William as his son, he has committed himself to a lifetime of want. Just as Jamie and William are pushing and pulling against the elements outdoors, Claire and John fight the disease and their own friction indoors as his fever and pain heighten and the tension mounts. As they are forced into close company by the needs of his treatment, the bubble that has contained his secrets and her reticence bursts, leaving his desires and her fears out in the open. How much they will stand in the other, how deeply they may turn envy or pity or defensiveness into tolerance and respect is connected through the one thing that will always cause them to circle about the other: Jamie.

As William recognizes Jamie as “Mac” the groom from his childhood and remembers the pain of their last meeting, so John regains the feeling he thought he had long suppressed and feared would not return after Isobel died. The ache of being left behind or losing a loved one, of missing a shared final glance into an unknown future, and the bonds of family regardless of blood or title threads these people together, and the vastness of the New World regains the intimacy of past connection that won’t soon disappear.