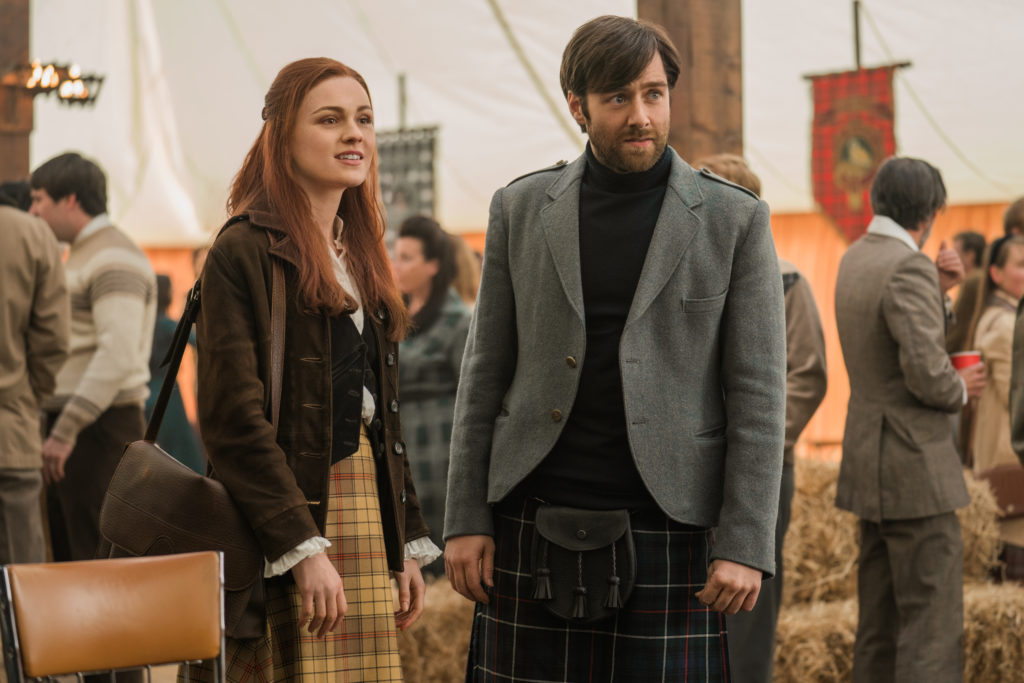 Roger plays guitar! WHY HAS NOBODY TOLD ME THIS?

Roger gives Fiona and her fiance champagne and a jar of salt and wishes her flavor in her life. This is literally the most adorable gift I have ever heard of.  I love that Fiona is totally over her crush on Roger and actively encourages him to tell Brianna how he feels about her. (Our beautiful bearded man is head over heels in love in case you needed a reminder.)

Now go get her.

Meanwhile, back in the 18th century, Claire looks on in disgust over the slaves passing by her. She’s powerless. Rufus is dead, and slavery is still alive and kicking.

Despite Jocasta’s protests, Jamie stays firm on his decision to not accept the heirdom to River Run.

I want to be master to my own soul.

Jamie tells Jocasta they plan to take Young Ian to Wilmington to board a ship back to Scotland. He wants to take Claire to a (Wollums Creek), where Scots have rumored to have settled. Jocasta scoffs at his idea that he’ll find work as a printer. I love how awkward Jamie looked trying to give Jocasta’s money gift back to Lady River Run racist.

Jocasta bequeaths Jamie with candlestick holders that belonged to his mother. In spite of her faults, you can tell she truly loves Jamie like a son.

Meanwhile, Young Ian is all like “YOU CAN’T TELL ME WHAT TO DO UNCLE DAD I AM AN ADULT HEAR ME ROAR!” Which is of course, what many kids do when they try to prove their maturity.

It is hard to argue with Young Ian’s statement about what he’s faced. The boy’s been through hell and back. What he fails to realize is that Jamie just wants to keep him safe.

Jamie ultimately relents and looks relieved when not-so-young Ian insists on writing his own letter to his parents informing him of his decision. John Bell does such a fantastic job of straddling the line between the child who wants Jamie’s approval, to the boy on the verge of manhood who has dealt with far too much trauma.

My blindness does not prevent me from seeing how much you love my nephew.

Jocasta and Claire have the most awkward goodbye of all time. I think Maria Doyle Kennedy does a great job of showing that Jocasta can be just as spirited as Claire, but she chooses to flame her fires only when it’s an emergency. It’s a matter of two very similar women who both love Jamie in their own way.

She accuses Claire of standing in Jamie’s true path of becoming a laird. You can tell it takes all of Claire’s restraint to not go full Sassenach on Jocasta. It’s hard not to laugh at the irony of Jocasta being more upset over Jamie being a printer than an angry mob coming inches away from destroying River Run and lynching a dead slave.

Phaedre packs Claire food for her journey, and I just want them to be BEST FRIENDS.

I have a feeling this isn’t the last we’ll see of River Run, and I’m not just saying that because I want to see more of Ulysses and Phaedre but that is also definitely part of the reason. GIVE THEM A SPINOFF IN ANOTHER CENTURY WHERE THEY ARE VALUED.

I love the fiddle transition to Brianna and Roger’s reunion. These two exchange the most adorably awkward hellos. Roger is me talking about how every flight I’m on is bumpy.

They head to North Carolina, which just coincidentally happens to be the place Bree’s parents were two hundred years ago.

Bree and Roger have the cutest car ride of the century. They play car games, and I’m just on the verge of “NOW KISS.” But Brianna is way ahead of me.

Just shut up and kiss me.

Spoken like the daughter of Claire and Jamie Fraser.

JQM educates our trio on the lay of the land and the Native Americans who claim the area. He notes how Cherokee women choose who they bed and wed. Young Ian is totally on board with this feminist idea.

JQM agrees to take Young Ian on a trade deal with some Native Americans in the area. Protective parents Jamie and Claire question whether this is a good idea. Jamie realizes that Young Ian is serious about wanting to take responsibility for his own choices, and warns him not to get scalped.

Look attractive while riding horses. What did you think was going to happen?

Jamie asks Claire if she’d prefer to start somewhere anew like Boston, where she already happened to live 200 years from now.

I want us to make a home together. A place that’s ours.

Jamie asks what Brianna’s choice was. Claire says she knew from as long as she could remember what she wanted to be and do. She mentions with an air of melancholy that Brianna never seemed to be able to make up her mind but studied history because of Frank.

It’s sad when Claire admits that Bree and Frank spent more time together. It’s the first time she’s really had the chance to talk about her feelings regarding the matter.

I think that’s why she chose history in the first place. She wanted to please him.

Claire will never let Jamie live down his time in a brothel, and I love her for it. So does Jamie.

It’s nice the show gave Jamie and Claire a chance just to talk. Claire asks Jamie if being a printer is fulfilling and her face falls as he gives her an honest answer. She educates him on the pursuit of happiness and Jamie’s dry response, “I don’t think I’ll be happy unless I’m a criminal” is positively golden.

Jamie sweetly tells her that he’d lay the world at her feet, but it’s too heavy for him to lift. Claire responds by galloping after their runaway mule because going off alone has always served her so well in the past.

My mom always said men in kilts were irresistible.

Brianna hopes that Claire found Jamie and I just want her to hear me yell, SHE DID YOU GINGER PRINCESS.

You can practically see Roger’s heart leap out of his chest when Brianna nonchalantly calls him her boyfriend. Bree knows what she wants, and she just goes for it.

Roger and Bree dance and it’s so cute I want to puke I will protect them with my life I tell you don’t hurt my babies.

The pack mule returns with no Claire. Our heroine is thrown off her horse and knocked unconscious. Meanwhile, Roger sings a pretty song that is obviously about Brianna.

Note: I can play fiddle Outlander team! HIRE ME.

The look on Brianna’s face during Roger’s solo is literally me.

Brianna conveniently happens to have bought Roger a book and his favorite whiskey and just happens to be like, “Oh we should share this fun beverage together.”

I see you girl.

Roger drunkenly muses about the stag head mounted on the wall in Brianna’s room. Brianna is just like, That’s cute, where did my clothes go?

Roger sweetly and frustratingly interrupts their tryst to confess his love and propose to Brianna.

I want you, Brianna. I cannot say it more plainly than that. Will you marry me?

Roger, I love you but slow down you beautiful bearded man. Our ginger princess is not ready. I admire the fact that she tells him that straight up. However what she does next is a bit uncouth.

Brianna then literally throws herself onto our dejected Roger, genuinely perplexed why he is no longer warm for her form.

Brianna, I love you but slow down ginger princess.

Roger is understandably hurt by the thought that Brianna won’t marry him but is absolutely cool with having sex with him. Brianna is hurt that Roger says that would’ve had her on her back dozens of times already if that’s all he wanted from her. She calls him out for the sexist things he starts spouting but also fails to understand why Roger is so hurt.

The point is I love you dammit. But you don’t love me.

A wise man once said the course of true love never did run smooth.

Instead of finding sex in Fraser form while taking shelter for the night, Claire finds a human skull. Part of me just wants to go all Shakespeare Sassenach and muse on “Alas poor Yorick,” but our sassenach is too tired and wet for an impromptu Hamlet soliloquy.

She finds herself face to face with a Native American whose head appears to have been scalped the same way as the skull she just found.

This is looking like when she found Geillis’s bones in the present day! What in tarnation is going on?

Brianna tells Roger she may not believe in marriage at all which makes him feel so much better.

Honestly, I feel like he’s a jerk about the whole thing. I completely understand being utterly heartbroken by being rejected by the love of your life, but his all or nothing attitude does not a healthy marriage make.

Roger calls out for Clan Mackenzie. The Mackenzies are here! He looks sad. Bree seems sad. I am crying.

They burn the stag. The look on Roger’s face when he realizes Brianna is gone burns my soul.

Claire wakes up without her shoes, and somehow she’s magically back where Jamie is?

They surmise the Mister Native American the Friendly Ghost brought them back together which is simultaneously sweet and spooky. She discovers the skull has a filling which literally won’t be invented for another hundred years.

I know that look, Jamie Fraser. You’re in love.

What did you think of the episode Outlander fans? I loved the contrast between our firmly established relationship and the fiery unstable beginnings of the second.  I thought Richard Rankin and Sophie Skelton knocked it out of the park with their scenes. I like that they’re not Jamie/Claire 2.0. They’re unique in their own way and come to the relationship with different ideals. I admire Brianna for sticking to her guns about not being ready for marriage, but I just know this is not the last we’ve seen of Brianna and Roger.

I loved the violin melodies that underscored this episode. The tunes reflected the mood of different scenes without being too overbearing or overpowering.

Finally, I liked that they showed Claire’s insecurities, wondering if Jamie wanted to go down the path they were treading or if he was just doing that for her. It’s such a normal fear in a relationship, and I’m glad that Claire is shown as a strong woman who also gets secure like every other normal human being.

I loved the ending shot of Claire and Jamie overlooking their new home. I can’t wait to see what happens next. Until next week!