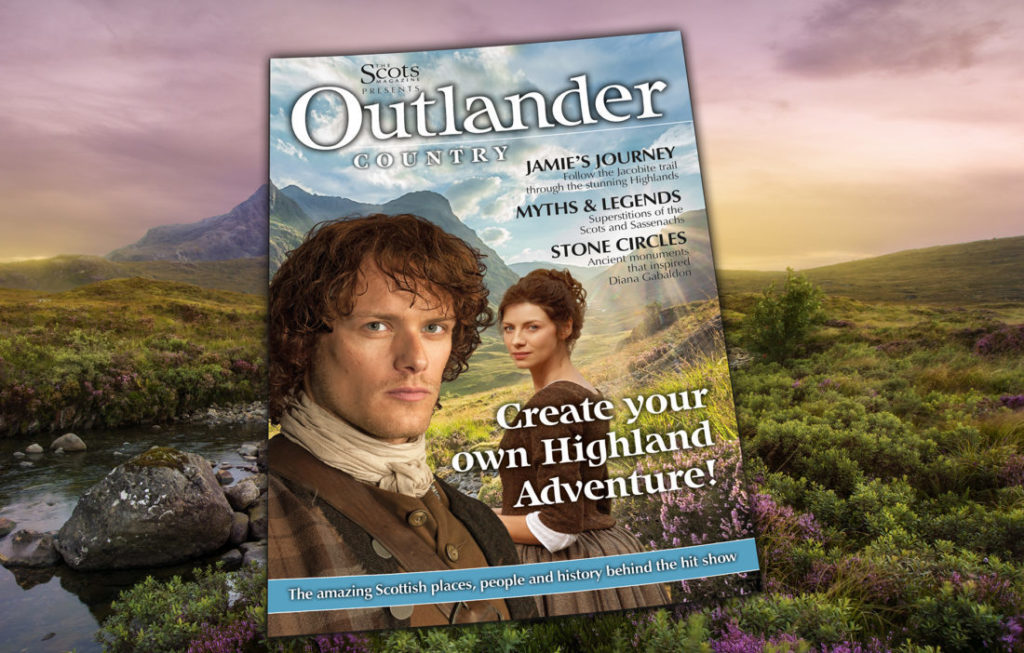 The Scots Magazine asked us to review their upcoming Outlander Country edition, which will be available November 19th through Barnes & Noble. This review is solely my own and does not reflect the opinions of anyone else connected with this website.

There was talk early on that Outlander would be for Scotland’s tourism what Game of Thrones was for Ireland’s, and I believe this magazine is a reflection of that as it reads very much like a travel book. While they do provide some interesting tidbits about both the real life locations in the books (if they exist) and the locations used for filming throughout the first four seasons of the show, they also plug other locations that travelers would enjoy if in the area. It is pretty obvious that boosting tourism is their goal, as they even provide the best time of year to visit and even encourage you on the cover to “Create your own Highland Adventure.” If you are planning a trip to Scotland to do an Outlander tour, then absolutely this magazine would be a good resource. As an introduction to Scottish history for the Outlander era and the filming locations, I also found it useful.

That being said, if you are looking for great photos from the show or related Scottish locations, I do not recommend this magazine. There is a lot of photo editing here, where shots of the actors are taken from show stills and superimposed over highly edited photos of the Scottish countryside. Any of the photos larger than thumbnails are disappointingly blurry, further detracting from the visual attraction of this production. As an Outlander fan, if I was looking for photos from the show then I would purchase something produced by Starz, who has hundreds if not thousands of gorgeous show stills. With a magazine such as this, especially with a name like Outlander Country, I would have preferred high quality, clean shots of the Scottish Highlands and the other locations where this show takes place.

I will say that the magazine taught me a few things, though, like how Scottish locations were used throughout the 4 seasons, even places that are supposed to be in France, the Caribbean Islands, or America. There were also some great articles that were not tourist oriented, such as a the one about the Outlander Kitchen book. I do not own this volume yet, but after reading about it here, it has joined my wish list!

Don’t just take my word for it, though! Head down to your local Barnes and Noble after November 19th and take a look for yourself.