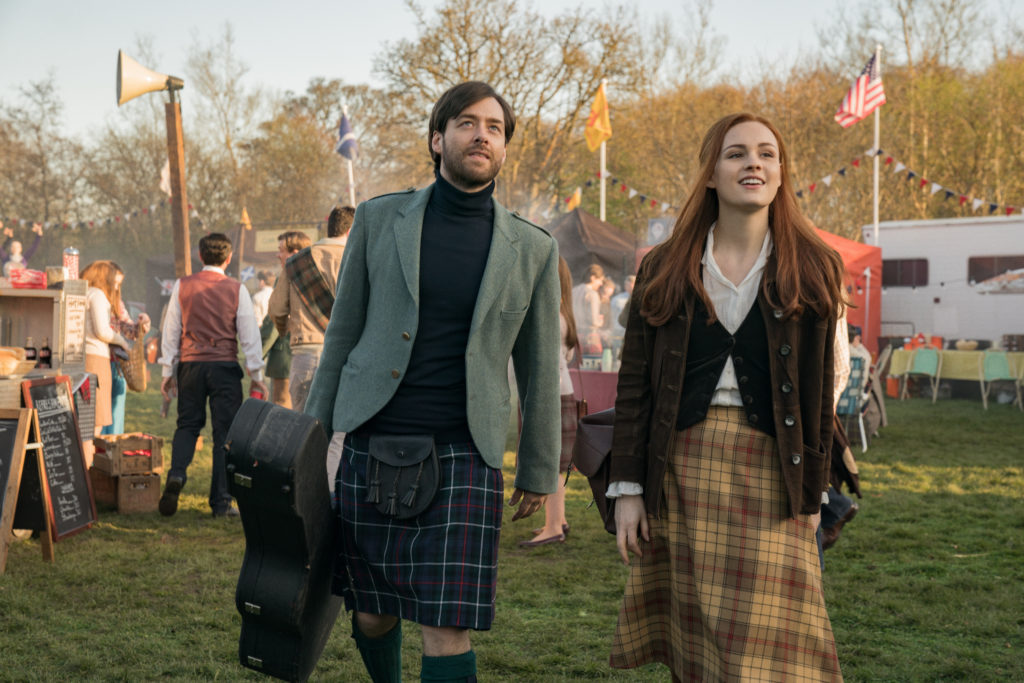 Below are excerpts or videos from new interviews with Sophie Skelton and Richard Rankin about Outlander episode 403, “The False Bride.”  Be sure to click on the links to read the full interviews. Since these posts/interviews follow the latest episode, beware of spoilers and there may be a discussion about storylines in future episodes.

RICHARD RANKIN We spoke at length about that scene, what it meant for each of us, what it meant for our characters, and Roger’s very traditional approach to love. He’s had experience with other women, but when it comes to Brianna, there’s something unique there, and that he loves her very much, and sees a future with her. He sees them being together and the foundations have already been laid for a life together. He’s connected to that, and he’s taking a traditional approach in that he wants to do it right, and he doesn’t want to take that next step until they are fully committed to each other. Therein lies the conflict. Both are very right in their opinions, and that’s what makes for such great scenes whenever Brianna and Roger lock horns. It usually comes from a place where the argument is balanced very evenly either way. Roger has very valid opinions, very valid points, on why they should do this, and Brianna has equally valid points. That’s what brings the scene alive, I think. You could come away from that scene agreeing with either character, because they both have strong ideas on what their next steps should be as a couple.

SOPHIE SKELTON It’s not as if he believes in no sex before marriage. He’s just taking that stance with Brianna, which in a way is quite romantic. But for Brianna’s point of view, it seems a little hypocritical. She’s put herself in this very vulnerable situation which is quite a rad thing to do for a virgin in that time. To kind of throw her top off is quite a bold move. So she’s in quite a vulnerable situation. She just feels rejected by that but I think in the moment everything is a little bit more heightened.

And in this episode, there’s this big fight between them. It’s one of my favorite Brianna moments in the series so far because she’s spent so much time seeming so young, and then suddenly we have this fight where she’s voicing what a modern audience will likely think of as a more mature, more reasonable response. Did it feel that way for you?
Skelton: Absolutely, because as you say, sometimes Brianna’s reactions can be a tad bratty. But with this, she’s justified. People are entitled to their different opinions, but her whole point is that Roger slept with other women. Why shouldn’t I be able to sleep with him when he’s done it before?You can’t just pick and choose your morals for different people, although Roger has obviously done that.

[Glances at Rankin, laughing] I know Richard is going to —

Rankin: No, no, I enjoy you recounting that!

Skelton: But also, she’s put herself in a very vulnerable position, and that’s not Roger’s fault! For a woman to initiate sex, even in this day and age, is quite a thing. Usually, you expect the man to ask for the woman’s number, or for it to be a collaboration. And the fact that she throws off her top, it’s very brave. For Roger to then be like, “No, no, no, this isn’t happening,” is just quite a vulnerable place to be. So the bit where Bree’s on the floor, and Roger, very gentlemanly, gives her her shirt back, I played that moment like, Wow, okay, now I feel like an idiot.When the argument follows from that, it’s heightened because they’re both in such a vulnerable, hurt place.

How long did they give you to learn the song for this?
Rankin: I’d played the guitar for quite a while, but I’d let it slip for a few years. They had initially suggested to me that I play a fiddle track, and I was like, “Don’t be ridiculous, I can’t play the fiddle.” Roger plays the guitar, so I thought, Why can’t it just be that? But the compromise was that they were going to give me a fiddle track to play on the guitar, and I thought, Why?! They’d given me the first piece of music, “The False Bride,” but then they gave me this other track [that Roger plays briefly before he starts singing], and it was this 160 beats-per-minute thing, and I thought, Are you joking?!

Skelton: I was laughing when you asked him about it because I still dream about that song.

Rankin: That song haunts us. That’s what I did in the greenroom, for weeks.

Skelton: Credit to you, it was amazing. But it did get to the point where I was like, “Richard, I can’t actually be in the same room as you between takes.” Even on lunch, you’d hear him from his trailer. Richard had no friends for a few weeks.

SYFY Wire: WATCH: SOPHIE SKELTON AND RICHARD RANKIN HAVE IT OUT ABOUT BREE AND ROGER’S FIGHT IN OUTLANDER S4 E3: ‘THE FALSE BRIDE’

“[The scene] epitomizes Brianna and Roger’s relationship and how they function together,” Rankin explained to TV Guide. “[They] just let things build up without any real communication, and then let things explode how they will, which is pretty much what happened.”

“I think it’s a very interesting scene….You have a very modern woman for her time and, from Brianna’s point of view, this very old-fashioned gentleman,” Skelton added. “It’s really interesting to see how they collide in this moment. We know that Roger and Bri are not very good at communicating. Here, they lay all their cards on the table and they are on very different pages about where their relationship is at and where it is going.”

“It’s one of those, ‘Oh my God you make me so angry but I love you’ kind of things. Ultimately he’s going to want to come back to that,” the actor said. “Even though I think they both have very valid points and they are justified reasons for why they do things, they can sometimes be at opposite ends of the spectrum…They’re not on the same page, sometimes not even in the same book so it can end in a pretty heated exchange. It’s by no means the last time that happens for Roger and Brianna.”

THR: ‘Outlander’ Engages in a Very Modern Debate in “The False Bride”

Well, Roger believes in the double standard of sleeping with women he doesn’t love but wants to marry a virgin, and that was so upsetting to see because he’s such a reasonable, lovable guy otherwise. Why do you think a modern guy like him still subscribes to such dated ideologies?

Skelton: That’s the big thing for Brianna in that scene. Roger’s mindset is ‘no sex before marriage,’ and that she could respect. But in the moment, she just feels so — it all comes from a place of confusion for her. Roger is doing it from a place of love, in terms of his feelings for Brianna are different than the women before. He wants things to be a certain way, and that’s unfair for Brianna. For her, it’s, “Well, you have been with other people, so why now suddenly change your morals?” I understand from Roger’s point of view, he does care about her, but in that moment, Bree put herself in a vulnerable position and she feels very hurt. She thinks Roger is being unfair and hypocritical. It’s not as black and white as his morals or her opinion on his morals. It’s just a bit of a mess in that scene. It’s a very interesting topic and very current of that time, when the sexual revolution was coming into play and people were having sex before marriage. It’s an injection of a modern topic into Outlander, which I’m excited to see stir up conversation and debate.

Rankin: But she should have just said yes in that moment. Then this wouldn’t have happened. [Laughs] But seriously, the climax of the scene is essentially two people who are feeling very vulnerable, very caught by each other and lashing out at each other. They don’t necessarily mean as much as the conviction within the scene suggests but it’s just when people get that hot or put themselves out there, they lash out in that way. It’s quite Roger and Brianna. It’s one of the most interesting aspects of their relationship that I enjoy playing, the way that they are with each other and that never really ends.

Skelton: They’re not very good at sitting and talking about how they feel and why they feel that way — they both just feel. And when they get hurt, they substitute it with anger. That’s the main ingredient of that scene.