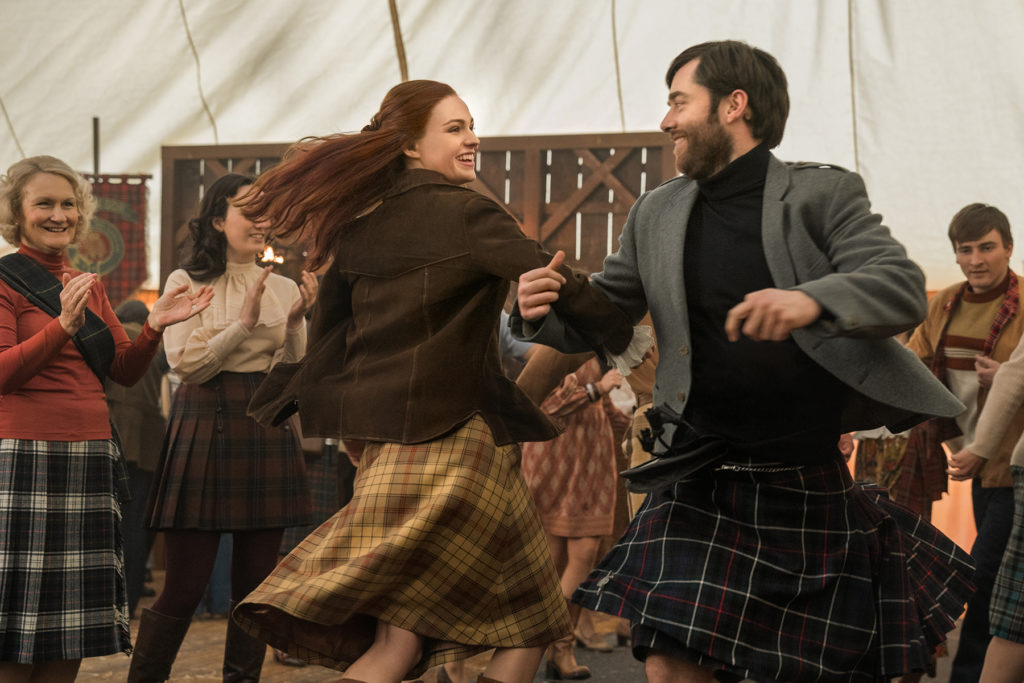 At first viewing, I thought this season’s third episode, “The False Bride,” was about the concept of home and establishing a foundation for oneself, like a flag staked in the ground during a land rush. To be able to say “I exist here, and what issues henceforth from this land is from my hands.” Though the episode cuts back and forth between two centuries and two couples in different situations, what we really witness is the push and pull of four individual threads – that of Jamie (Sam Heughan), Claire (Caitriona Balfe), Roger (Richard Rankin), and Brianna (Sophie Skelton) – and how they are inching towards each other, gradually forming an interlocking pattern that will appear in time. As the episode unfolds, we see the pursuit of happiness extend beyond gratifying the immediate needs of the self towards what will benefit loved ones and progeny far into the future, and how present hardships may lay the foundation for later blessings.

For Jamie and Claire, their reunion has brought the rare experience of being still together, and they relish the quiet moments as only adults with age, experience, and wisdom can. The quiet can also create new anxieties or dredge up old ones, and Jamie continues to struggle with what he represents to Claire and, by extension, his family and clan. Bereft of land or castle or official title, what can he assume or how can he prove what he is to others, or give others reason to lean against him for leadership or guidance? For Claire, the burden of foreknowledge colors the major decisions of settlement, as she knows what will happen in America in just under a decade. The Revolutionary War is just one of the influencing factors in her current decisions, but also the fate of the Native peoples of the region and the increasing slave trade that revise the romantic ideal of the American dream, of how a nation was forged and through what means and, as Jamie acknowledges, how to deal with the devil to scratch and claw towards Paradise. For Jamie and Claire as parents, they must compromise for the sake of their daughter and what she will inherit two centuries later, but as a woman out of her time and a man without a country, they have both the power and responsibility to create a more enlightened world.

Back in 1970, Roger Wakefield is surrounded by his home and memories and Scotland and yet is the most alone of the four at that moment. Kudos must be given to director Ben Bolt for making interior scenes look cavernous and empty, and exterior forest shots seem intimate, as Roger never seems in the moment at this point in his life; rather, his eyes see ghosts of happier times and his guitar reveals what his heart can not. From the opening shot of the man sitting in an empty den, about to cross an ocean to represent Scotland for its descendants who most likely had never seen its soil, I couldn’t help recalling the first time we saw Richard Rankin as the adult Roger in the “Dragonfly in Amber” episode of the second season, watching an episode of The Avengers with a group of children while the grown-ups socialized after the funeral of his adopted father, the Reverend Wakefield. Roger’s eyes had the same look in both scenes: those of a boy who wandered off in the woods and has just turned around and realized he is lost. It is like a home suddenly reverting to a house, a warm living room turning back into wooden panels and nails and mortar; for Roger, such loss of connection is only compounded with his separation from Brianna, who is studying engineering in Massachusetts. Everything around him is too liquid, too easily shifted aside.

Jennifer Yale did something pretty ingenious with Brianna in this episode: she purposefully made her ancillary, then swept the carpet up. This is Roger’s performance at the Scottish Festival, Roger’s need for connection, Roger’s isolation: she pierces his clouds like a sun beam, bringing him forward out of his funk, eliciting his physical response. Like Emma Peel, she makes him fetch the cream. I love the awkwardness between Sophie Skelton and Richard Rankin, which I don’t read as faulty chemistry. Rather, Sophie nails Brianna as her own person with her own stake in the ground; though she isn’t always committed to a course of study, how blessed is she to be so intelligent as to succeed in multiple subjects, to embrace being alone as a young woman in 1970 as a demonstration of agency rather than a character flaw. Furthermore, she drives poor conventional Roger mad as he can’t yet figure her out, and rather than the traditional path of the female molding herself to fit the male’s life course; it might be the male who must change in this story.

Their final conversation at the burning of the stag stood out as the most important of the episode, as it reflects what they understand about each other at present and what they still have to learn. Brianna had a happy childhood with two parents who lived a charade of contentment for almost two decades, only to discover two things at the dawn of her young adulthood: family and blood and lineage aren’t always sharply drawn, and love is not concrete. Because of this, she admits that she doesn’t know if she believes in marriage, though she is not ruling it out completely. Admittedly, Roger is too intense in his proposal, but his desire for home and children comes from his own background and, though he was also raised by a kind and loving man, the creation of his own family could fill the void for the one that was taken from him. At this point in their relationship, neither Brianna or Roger clearly understand this about each other, and his assertion that it must be all or nothing does not sway the headstrong girl whose mother’s life choices are still fresh on her mind.

Thus, the gangly phase is a necessary one: where the limbs don’t quite work together, and the pimples can’t be controlled, and the hormones are crazy. Roger and Brianna don’t have to court amidst invasion and battles and bloodshed. They have the luxury of quiet, and quiet can be, well, quite maddening at times.

Back in the 1760s, Jamie and Claire struggle with whether to establish a home in town, where both can set up practices for printing and healing or a homestead in the wilderness, where they will be at the mercy of nature. For both, the question is: which choice is the forward one and which will trap them in a stasis for which neither is built? Claire realizes Jamie would be unhappy as a printer, but he admits that personal satisfaction isn’t always paramount to the best situation of all involved, and after years of miserable solitude, he has ties to those in the present like Young Ian (John Bell), Fergus (César Domboy), and Marsali (Lauren Lyle) (and his family back home) as well as his daughter in the future whose happiness depends on his choices. As luck or Fate would have it, Claire’s discovery of a mysterious skull and the spirit attached to it lead her and Jamie to an overlook and a beautiful piece of land which could be perfect for a homestead more or less on their own terms, and a chance to set the roots that could be shared by their descendants for many years to come.

As with Brianna, Claire has the more enviable position here – she can be a healer anywhere, as there will always be need of her skills. It is Jamie who must decide on the bigger sacrifice: returning to Scotland or establishing a home where there will eventually be a battlefield. Brianna does not share Roger’s urgency and does not want to be bound by something that, conceptually, might be a foundation of sand. If she is to be with Roger, it will not be because he pressed her to adhere to his timeline, though in her experience, time is also not concrete. 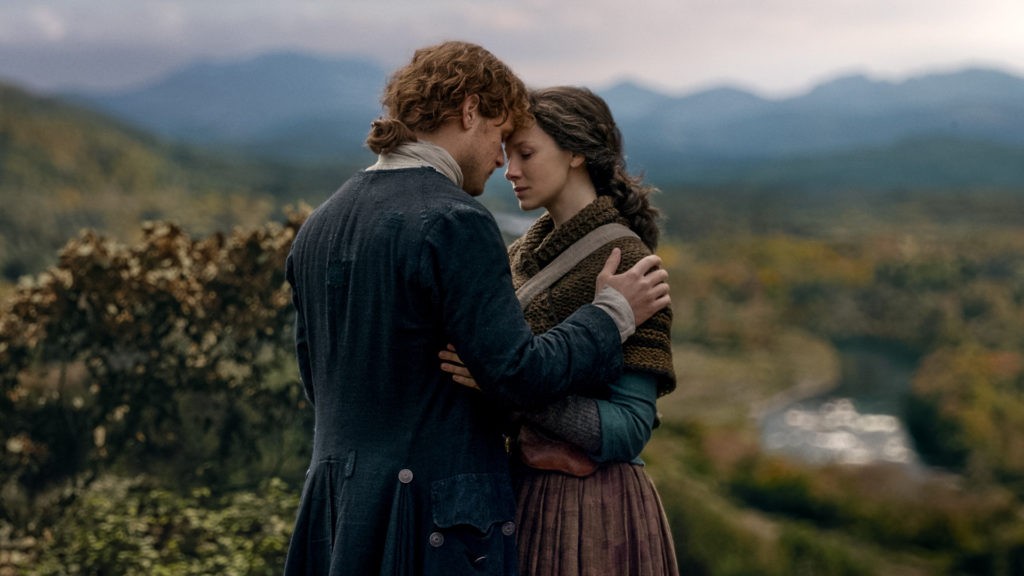