**Spoiler Alert:  There are details about season four in the quote included in this post.  If you have not read Drums of Autumn, skip the quote.**

Claire (Caitriona Balfe) looks happy and has put her doctor skills to use in the colonies in this new photo from Outlander season four.  The photo was released via an exclusive with TV Line.

Executive producer/writer Matthew B. Roberts is also quoted with the photo:

“… the book’s biggest moment arrives when Jamie Fraser and his adult daughter, Brianna Randall, are face-to-face for the first time. “I can say that they will meet, and it will bring some tears,” executive producer Matthew B. Roberts says cagily. “This moment is such a big deal, we try to be as true to the source material as possible.” Look for the season’s action to take place from a bunch of standpoints — “We definitely open up the POVs,” Roberts says — but don’t worry about missing out on Himself and his missus. “Jamie and Claire will always be the centerpiece of Outlander,” the EP notes.

Might we see the return of Jamie’s beloved godfather this season? “When we decided way back to keep Murtagh alive, there was a reason for it,” Roberts says, declining to offer specifics.” 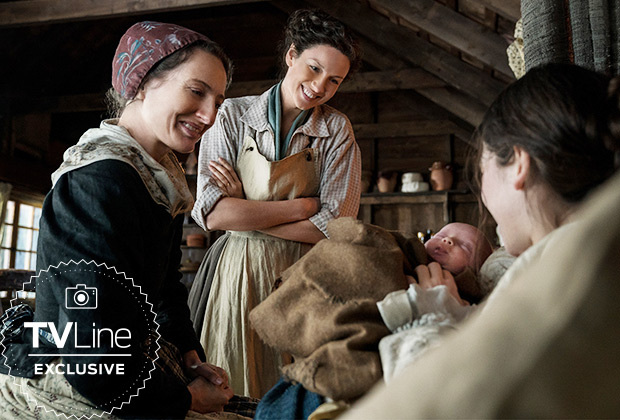