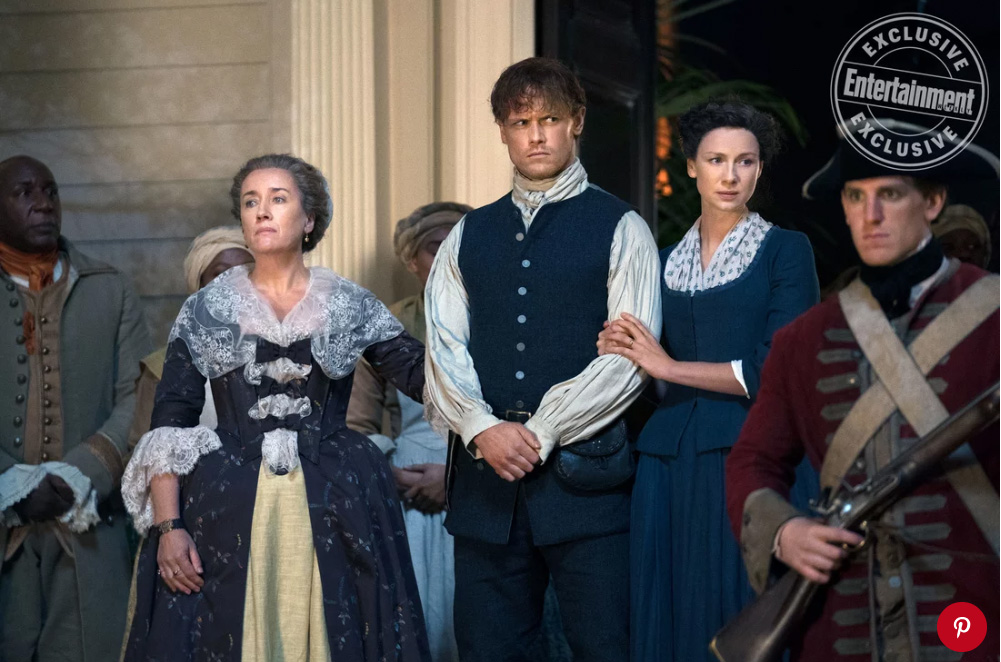 A new official photo from season four of Outlander is in the new issue of Entertainment Weekly (the issue with Murphy Brown on the cover).  Along with the official photo, there is a blurb on the upcoming season that includes quotes from executive producer Matthew B. Roberts and Caitriona Balfe.

The photo shows Ulysses (Colin McFarlane), Jocasta (Maria Doyle Kennedy), Jamie (Sam Heughan), and Claire (Caitriona Balfe) at River Run.  And of course, there is a Redcoat standing to the side because trouble always follows the Frasers.

Below are the quotes from the blurb:

“Going in this year, we knew we were going to have to allocate more money to visual effects, knowing that Scotland was going to have to play North Carolina,” executive producer Matthew B. Roberts tells EW. “It’s our most challenging season.”

“Right after we finished production in South Africa [for season 3] I went to the States to see if Scotland could play North Carolina,” Matthew B. Roberts recalls, “I took photos of there and when I was in Scotland [forests]. Then I would post them on social media asking, ‘Where am I?’ When people would write, ‘Oh, that looks like North Carolina,’ I knew we were onto something.  I knew we’d be okay.”

“There’s a likeness between the two women, but for Claire it’s very hard to get past the fact that Jocasta is a plantation owner with slaves,” Balfe tells EW. “Jocasta doesn’t understand what Claire’s concerns are. That stops them from being able to really form any proper bond.”