**This post is from a non-reader and any comments revealing spoilers from the books will be deleted.** 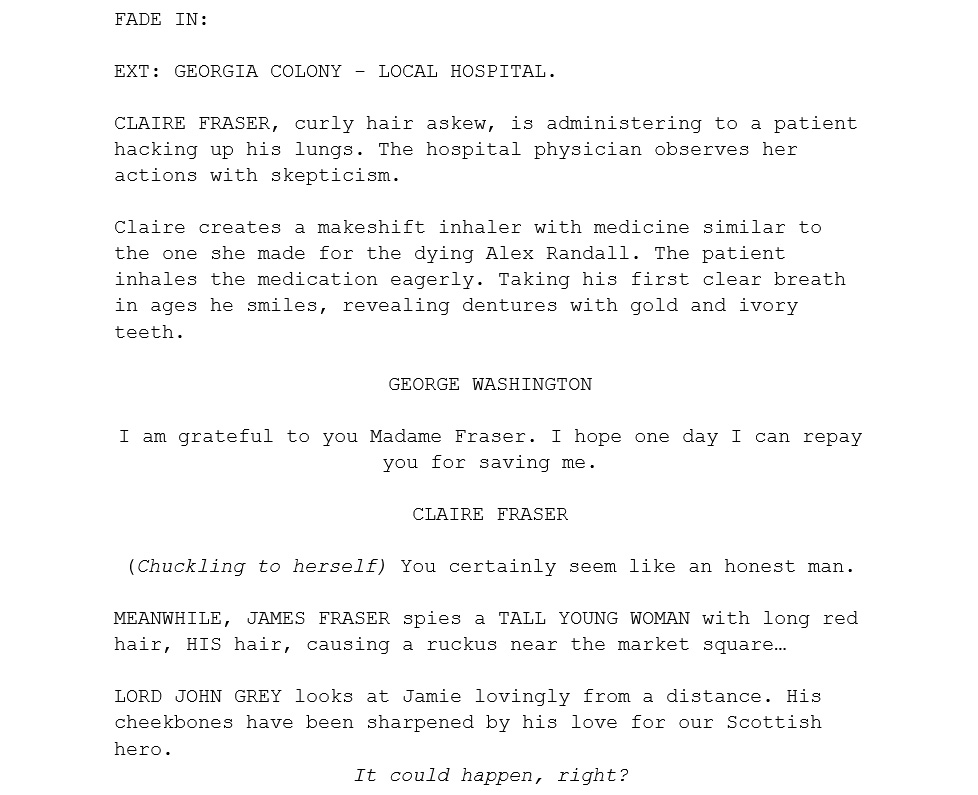 Pardon me for sounding like a drama queen, but it’s felt like 200 years since Outlander was last on. As I fell into a Droughtlander daze, I began to fantasize about what’s on the horizon for next season

I love the fact that I have no clue where the story is headed. (Besides the bedroom for Jamie and Claire. For the plot of course.)

Here a few things I expect might happen, and some things I hope we get to see.

Feel free to chuckle if I’m so far left field I ended up in another century.

1. Jamie and Claire become involved with the birth of a new country.

Diana Gabaldon did an amazingly heartbreaking job of showing us how the second failed Jacobite rebellion had an enormous impact on Claire and Jamie’s lives. I’m curious to see how the bubbling feelings of revolution in the colonies will impact our favorite couple. Will Claire and Jamie want to stay to witness another major event in history?

2. Brianna finds her way to the past. Roger will be first or follow her.

Also, I’m quite curious what circumstances will cause her to drop her present life to journey to the past. Does Roger accidentally get sent back somehow? I have to believe that something has to happen to someone she loves, whether it be Claire or Roger, to warrant the prospect of her potentially losing her present life.

Somehow Jamie runs into Roger before realizing his significance.

3. Claire sets up a medical practice. Marsali becomes her pupil.

Badass Doctor! Claire working at Boston Hospital was one of my favorite parts of the first half of season three. I would love to see more scenes of her development as a healer, finding more ways to help the sick in spite of the constraints of the century.

Laoghaire’s vivacious daughter needs a bit of a spotlight next season. Who is she beyond loving Fergus and hating Claire? I’d love to see her take an interest that forces her to interact with Claire more often.

Will the birth control the two women discussed last season work for young Marsali? I shudder to think what she’ll do to Claire if it doesn’t work!

4. Fergus and Young Ian open up their own tavern.

I just know we haven’t seen the last of these two. Will William discover his true parentage? Will Grey somehow end up becoming governor of Georgia? The man has a resume longer than the Atlantic Ocean.

I wonder how Claire would react to seeing Jamie’s son in the flesh.

6. Something bad happens to Young Ian. He finally decides to return to Lallybroch.

This poor boy just seems to have a string of bad luck ever since his first sexual tryst was interrupted by a fiery conflagration. I fear that something will happen to him after his traumatic turn with Geillis and will finally make him truly want to return to Lallybroch of his own accord.

7. Brianna and Roger get married. Jamie doesn’t approve of Roger.

Roger and Brianna tying the knot are a given. That man looks at Brianna like the sun rises and sets with every breath she takes. Somehow they end up in the past, and Brianna tells Claire they’re wed.

Jamie hates him of course.

8. Something GOOD happens to Young Ian. He stays in Georgia or moves to another colony.

This possibility is less likely. Perhaps Young Ian falls in love with an American lass or with America itself? I just want him to be happy.

9. Jamie and Claire will live somewhere that ISN’T a brothel.

But where? Will they eventually decide to stay in America or sail back to Scotland? They’ve been without a true “home” ever since Claire returned to the past. I think to find their own place that’s truly, and utterly theirs will help recement the bond between Jamie and Claire.

Jamie will also probably get arrested for something he didn’t do. Again.

The last time we saw Murtagh, he was being sent to the colonies from Ardsmuir. I literally have no idea how they’ll reunite with him, but I know it will be awesome.

Perhaps he’s the first one who comes to a tall lass with hair as red as his godson’s and an attitude to match!

11. Joe Abernathy will be awesome.

This one is a given.

I’m certain Diana’s take on where our favorite couple will be headed plot-wise is 200 times better than what I could imagine.