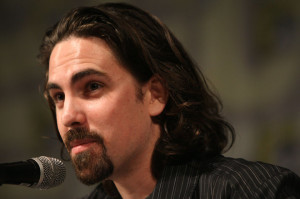 “The score needed to DO something.” –Bear McCreary

In an effort to relieve the Droughtlander jitters, and to maintain pre-season-four momentum, Entertainment Weekly recently spoke with Outlander composer Bear McCreary prior to the release of the season three score, out Friday, Feb. 9.

McCreary discusses the important role music plays in establishing a pivotal story shift, carry-overs from scoring Battlestar Galactica also with Showrunner Ron D. Moore, the most challenging score of his career, and the heartbreaking experience of quite literally writing off Frank (Tobias Menzies).

ENTERTAINMENT WEEKLY: There are so many dramatic moments in season 3, like Frank’s death and Claire and Jamie’s reunion. What was it like doing all that music?
BEAR MCCREARY: It was probably the most dynamic season of television that I’ve ever been involved in. It spanned centuries and the globe, so it really put a lot of pressure on the music to not only keep up with the drama, but to propel the story in some ways. Like when we set out on the high seas. We really needed to announce in the music a change in the language of the show. That was really exciting, and that alone would have been a big enough challenge…

I know that there are a few instances when the producers went outside for music, like the use of Walk off the Earth’s cover of the Bob Dylan song “A Hard Rain’s A-Gonna Fall.” How does it work? Do they say, “Bear, I’m sorry but we don’t need you on this particular episode”?
…We did experiments like this on Battlestar Galactica, so I’m definitely used to [executive producer] Ron Moore throwing curve balls. I enjoy the opportunity to step back and let a piece of the source music or a song come to the forefront in Outlander because it is so rare. It makes these sequences feel very special. I hate to admit it, but no piece of a score would have the same impact…

What would you say were the hardest moment to write music for from season 3?

Boy, there’s a few. Emotionally, Frank’s death was extremely difficult. I found myself weeping as I was writing. I felt so much for Claire. I felt for Frank and I loved the theme I wrote for Frank and it was sad writing it, knowing it was the last time. In many ways, I was saying goodbye to a piece of music that had been in my life for three years and a character…

How much time do they give you to come up with a piece of music?
Well, on this show I tend to have a lot of time compared to most television shows. On a network show, you can get six days to score an episode. On Outlander, because it’s premium cable and because of the way Starz works, I usually end up with a month or more for an episode, which is extravagant. I get episodes in groups and I end up with certainly a few weeks if not a month or two to play around with them. It’s a wonderful experience that’s relatively rare in television. And when there are major important musical changes coming, I’m usually given a big flag early. Like, for example, when we were going to go to Jamaica with the story, I didn’t wait until episode nine to start thinking about that. I was working on that almost before the season even started.

I loved the way you changed the tune in the title sequence midway through the season.
In the second season, we changed it to French and it sounded very baroque and aristocratic for six or seven episodes. When we went back to Scotland for the Jacobite uprising story, it changed again and was very militaristic. There have been a number of main titles that reflect the story and the geography and of course it’s going to change again now that we are not in Jamaica in season 4. I have never had the opportunity to do this before and I think you can probably count on one or two hands the number of shows that frequently change their title sequence for a narrative or creative purposes. It’s exciting.

Do you anticipate having to change the tone in season 4 because the action will take place in the American colonies?
Yes. I am honestly knee-deep in it right now. I’m working on the new episodes and these are the questions I’m grappling with at the moment. Historically speaking, we pushed the sound of the score to reflect our characters’ growth and our geography… We are seeing everything through their eyes and so I do think their theme that I wrote for them, the presence of bagpipes underscoring Jamie’s strength, are things that will remain in the show.

Head over to EW.com for the full read.