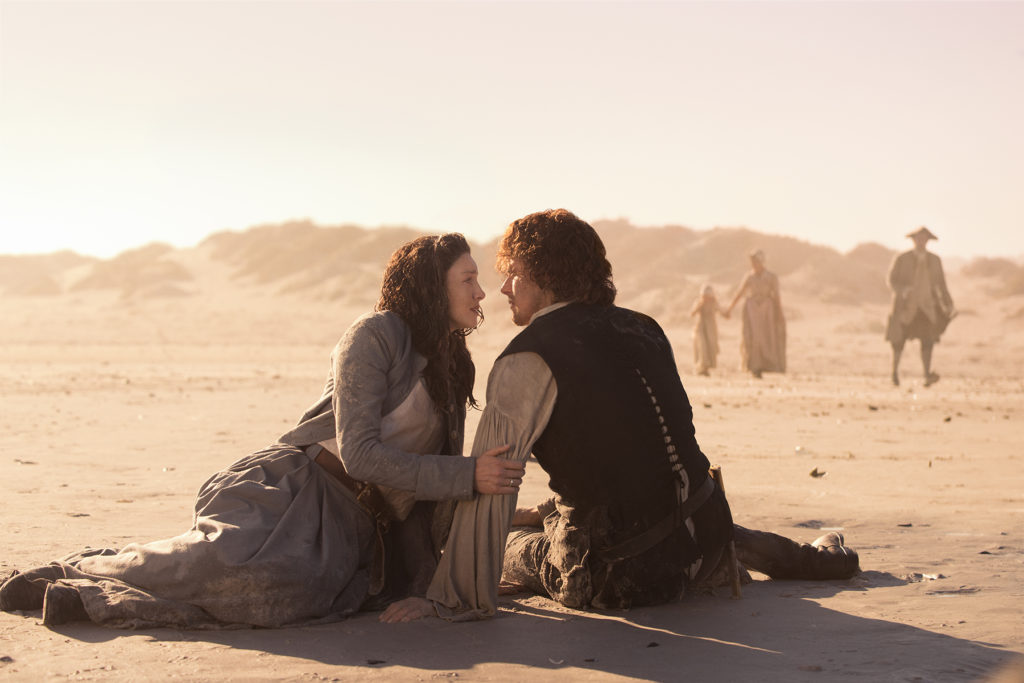 “A life for a life, sweet Claire.”

I was trying to think of an eloquent way to open this final review for the season.

What a season finale.

The episode started with a beautiful Claire voiceover that lulled me into a false sense of security.

Because it dawned on me that she was talking about how peaceful she felt about dying.

We then rewind to the night Jamie (Sam Heughan) was arrested. Claire (Caitriona Balfe) has the carriage bring her to the slave quarters at Rose Hall. She tells the driver to sound an alert if she doesn’t return.

Our resident other-cute-couple find Claire’s dress at the Black Cat Inn with a note saying where she’s gone. Fergus (Cesar Domboy) doesn’t want Marsali (Lauren Lyle) to run with him towards danger, but of course, Marsali tells him: “Fergus Fraser, I’m your wife. I’m going with ye.”

You know a story is well written when you want ALL of the side characters to have spinoffs. Seriously.

Leonard is like, “Lol, wait I’m supposed to be arresting you.”

They’re intercepted by a contingent of Redcoats who announce that they are taking Jamie into their custody. Leonard’s pride is wounded and asks by whose authority can they take his prisoner?

Why by the Governor of Jamaica’s authority of course.

I may have cheered when they transitioned to Grey (David Berry) looking every inch the authority over Leonard. He calls him out for lacking an arrest warrant or even a written affidavit from Tompkins attesting to Jamie’s guilt.

I loved that he kept not so accidentally calling Leonard a Lieutenant instead of a Captain.

The governor proceeds to deliver what must be the most epic roasting of the 18th century. (Besides the Declaration of Independence of course.)

“We prefer to grant ranks when they have been earned.”

“Your authority ends at the water’s edge….Lieutenant Leonard.”

Jamie thanks him for saving his life once again. I wonder if this new debt will come into play in a future season?

Regardless, the look of longing Grey gives Jamie as he departs is heartbreaking. David Berry plays Grey so well it feels like he’s been with the audience since season one.

Speaking of roasts, Ian (John Bell) lays Geillis (Lotte Verbeek) a new one when she calmly tells him that Claire is clearly after her treasure because of the prophecy.

“I’m tired of yer blithering. So leave me be or get on with it you bitch!”

I nearly screamed as Ian was dragged out one door as Claire was led in.

Geillis acts as if she hadn’t just told Claire’s nephew he was about to face a gruesome death. She tells her that Jamie’s been arrested and Geillis invites her to chat.

“We have a special connection that not even you and Jamie share.”

Geillis finally cuts her ignorant act and asks Claire why she’s there in Jamaica. She’s convinced Claire is there for the same reasons she is.

Meanwhile, Claire is just like, “I need to make better friends that don’t believe in prophecies.”

Claire blurts out that she hasn’t been in the past for twenty years (how’s that for a grammar conundrum?)

Geillis rolls her eyes, skeptical that Claire would ever leave Jamie. Claire finally (unintentionally) reveals that she, in fact, is the mother of the two-hundred-year-old baby.

She shows Geillis the pictures of Brianna as proof that she had returned to the future. Geillis recognizes Brianna and finally realizes it was Claire calling her name through the stones.

Geillis has Claire sent to a room and locked up Cinderella-style. Better-than-Prince-Charming Jamie Fraser busts in, and I pray to the Outlander Goddess that is Diana Gabaldon that they aren’t separated again.

Claire tells Jamie that she saw Young Ian being taken towards the sound of the drums.

They race to a clearing where the slaves (or natives) are having a ritual around the fire. Claire sees the parallels between their movements and the women she saw dancing around Craigh na Dun.

Yi Tien Cho (Gary Young) appears and tells Jamie and Claire that he wants to take Margaret (Alison Pargeter) to Martinique and start a life with her there.

For the first time, Margaret seems genuinely happy. The mood quickly turns spooky as she sees the rabbit Jamie saw while nearly dying on Culloden Moor. She also sees the bird Claire saw way back at the beginning of the season when she was miserable, and Frank was still alive. (Dammit why haven’t we had a Frank ghost cameo? Anything for more of Mr. Menzies.)

Understandably freaked out, Claire and Jamie listen as Margaret tells them the prophecy.

It finally dawns on Claire that Geillis must realize that only Brianna could fit in the prophecy. She tells Jamie that Geillis has stolen one of her photographs and they hightail it to Abandawe without hesitation.

(Also, Asshole Archibald (Mark Hadfield) attempts to steal Margaret back, but she stands up to him. He smacks her with a giant stick, and Yi Tien Cho loses it. I wasn’t sorry to see him being carted off by the natives (or is it slaves?). Heaven knows what fate awaits him.)

Jamie and Claire vow to each other that if something happens to either of them, the other must still go on. They find Geillis drawing a circle around Brianna’s picture, and Ian tied up. Jamie immediately tries to rescue his nephew, but Hercules (Apolinalho Antonio) draws a pistol at him.

It’s up to Claire to take on Geillis.

Geillis says that she gave up her child for the cause and now Claire must do the same. Claire realizes the pool in the middle of the cave has the same time traveling properties of the stones.

Not one to waste time, Geillis makes her way to her destiny. “It’s God’s will!”

Momma bear Claire kills Geillis by essentially beheading her with one slice of an ax.

Those were GEILLIS’ BONES???

Claire naturally goes into shock when she remembers her conversation with Joe. She’s not a killer by any means.

But she knew if Geillis had successfully traveled back to the future she would have murdered her daughter without hesitation.

It’s a rather gruesome death. But I understand why Claire did it.

As does Jamie. He notices both Young Ian and Claire are in full on shock as they escape from the cave.

While I do love the next scene, I wish they had devoted a little more time to Geillis. It also felt like Claire was completely fine again with no signs of post-traumatic stress. (Perhaps they’ll show more of the after-effects of the incident in the next season as they did with Jamie after he was raped?)

What I really love about this peaceful scene with Jamie and Claire is the intimacy doesn’t come from the sex. They could’ve just talked in this scene, and I would’ve been a happy camper. I’m not going to quote any of the sexy things they say to each other because that’ll just give you an excuse to watch it over and over again.

Not that anyone needs an excuse to watch any rare peaceful scene where Jamie and Claire end up naked in each other’s arms.

Of course, Mother Nature was like, “You need some conflict that doesn’t involve psycho time travelers? ON IT.”

The Artemis has sailed right into a major hurricane. Jamie and the crew try in vain to sail out of it. Claire goes to the top deck in spite of Jamie ordering her to stay below with the others.

Everyone manages to get below deck, but Claire gets swept overboard.

“I felt bodiless, free of terror and rage, filled with a quiet happiness.”

DAMMIT CLAIRE YOU CAN’T DIE! THIS ISN’T GAME OF THRONES!

(Did I recycle one of my jokes from a previous review? Yes, yes I did.)

I don’t think Jamie would ever call himself valiant or brave for jumping into the ocean to save Claire. He simply can’t bear to lose her again. As they surface, Claire still hasn’t regained consciousness. The couple is stuck in the ocean, and the camera pans up to the literal eye of the storm, and I yelled thinking that’s how it was going to end.

Thankfully an adorable little girl saves the day. She finds Jamie out cold on the beach. Jamie stirs and finds Claire, and breaths a sigh of relief as she finally wakes up. The little girl wisely brought her parents, who tell Jamie and Claire that the other survivors of the Artemis are being cared for.

Joseph Oliver welcomes Jamie and Claire to the colony of Georgia, and I finally accepted that season three was sadly over.

Are they going to find themselves in the middle of another rebellion against the British crown?

This season has truly been all about voyages. Claire is voyaging back to the past. Jamie is going on a spiritual voyage to find out who he was without Claire. Frank is voyaging to find out if he could ever salvage the past relationship he had with Claire.

Joe voyaging on an ocean of awesome.

Everyone brought their A-game and delivered truly emotional performances. The writers and directors deserve a round of applause as well for packing so much into thirteen episodes.

My mother and I sipped Outlander wine on her birthday while watching the penultimate episode. She gasped during the Geillis reveal.

“I thought you read the books!” I teased her. My mom had forgotten what happened in Voyager. I loved that she was just as surprised as I was.

I can’t wait to see how she reacts to the finale. What did you guys think of the season overall?

It’s been a pleasure writing these reviews. Until next time dear Outlander fans!