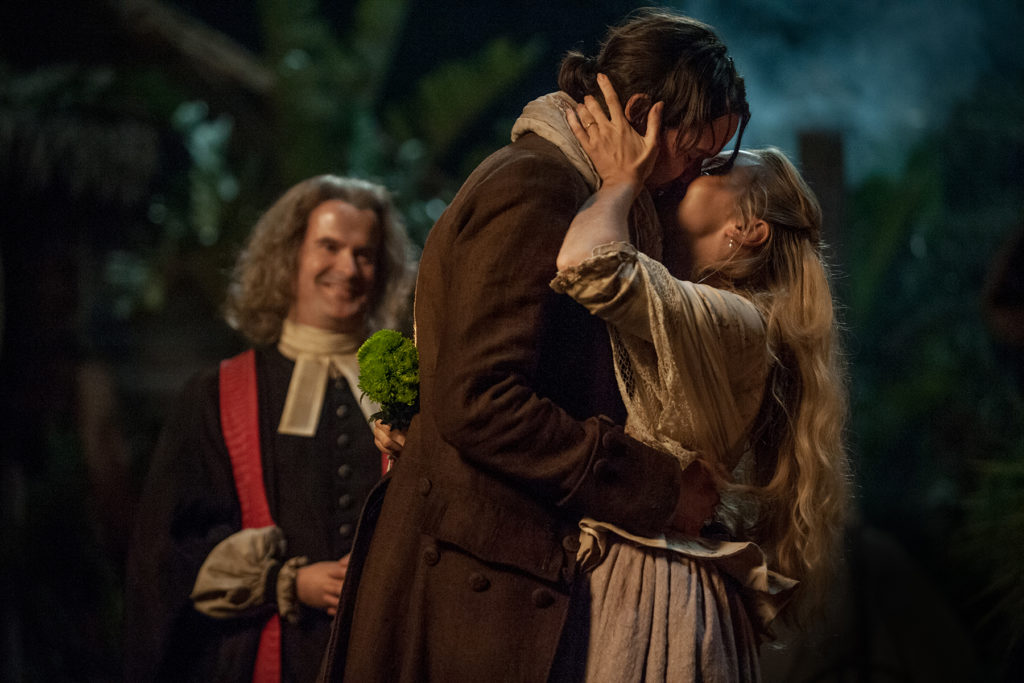 Have you ever experienced heat exhaustion? Felt the searing heat permeating your skin and soul as overwhelming nausea starts to build up in your insides and your head feels like it’s going to burst from pain? Although the sweat pouring down your back is gross and sticky, it’s literally the only thing keeping you cool.

Watching Claire (Caitriona Balfe) suffer from heat exhaustion and come dangerously close to full-on heat stroke was positively painful. If only there were vaccinations to protect against the sun’s rays.

Claire has survived her leap of faith from the Porpoise and washes ashore on the island of St. Domingue. Unfortunately, her struggles are far from over. She would’ve been better served wearing anachronistic shorts and a tank top, but even that wouldn’t have protected from the ANTS CRAWLING ALL OVER HER LEGS.

I may have shrieked nearly as loud as Claire did when awoke to thousands of ant bites.

I did love the earlier brief shot of her wedding ring still firmly on her finger as she’s adrift in the ocean. She later grasps it as she struggles to survive.

Desperate to find hydration and some form of civilization, she continues to trudge along, the heat relentlessly sapping away her energy.

I almost felt like the opening went on a little too long. If the writers intended to make viewers uncomfortable with Claire’s conundrum they certainly achieved their goal.

Somehow our heroine makes it through legs full of ant bites and a snake as a bed companion. The sight of Claire with her mouth agape as she struggled not to panic with the torture of the snake slithering over her body was bone-chilling.

I’m sure somewhere in the afterlife, Black Jack Randall is thinking, “Damn, why didn’t I think of using a snake?”

By the time she finally hears and sees signs of humanity, Claire passes out cold.

She awakens to the sight of water, cruelly out of arm’s reach.

“I tied you up for your own good” The lady we will later come to know as Mamacita (Victoria Leporia) informs her. Mamacita did it to stop her from scratching. She gathers up Claire’s clothes and gazes at the zipper on her bodice with suspicion.

She passes out again and wakes up to a man who introduces himself as Father Fogden (Nick Fletcher). He welcomes her to Hacienda de la Fuente. Fogden gently tells her not to drink water too quickly.

“I know, I’m a doctor,” Claire replies. Even weak Claire has her professional pride. Instead of being skeptical of her words, Father Fogden seems downright impressed. He goes as far as to compare her to Saint Brigid. Fogden credits Claire’s appearance with one of his she-goats finally giving birth.

The Father tells her she’s on the isle of St. Domingue and states that it would probably be a two-day journey to get to Jamaica with favorable winds. Claire says she must leave right away, but Father Fogden says Coco wouldn’t agree with that.

That’s right. Coco is an actual coconut.  (The urge to make a Castaway joke is strong, but I WON’T DO IT.)

Fogden speaks to Coco with such a straight face it’s clear he’s not making a joke. He stops himself mid warning to Claire about the dangers of pirates and escaped slaves to tell Coco to stop staring at the “pretty lady.”

“Not as pretty as Ermenegilda of course.”

Fogden asks Mamacita to help find Madame Physician something to wear. Mamacita’s hostility towards Claire is as subtle as a penguin walking around in Texas.

Claire asks Father Fogden later at dinner how they came to St. Domingue. Fogden explains that he traveled to another island to do the work of God. He ended up falling in love with Ermenegilda.

At that moment, I finally realized Mamacita was Ermenegilda’s mother.

Not one to waste time, Claire asks how she can get to the island to set sail for Jamaica. Fogden insists that he accompany her….next week.

Mamacita’s like, “We’ve been nice, let the jezebel go.”

She thinks Father Fogden wishes to replace her daughter with Claire. Hence the hostility. Fogden apologizes to Claire for the argument over dinner and says nobody could ever replace Ermenengilda in his heart.

“When you love someone as much as I loved Ermenagilda, it never leaves you.”

Having finally found a way to bond with Fogden, Claire pleads with him to let her head to the island in the morning. Fogden agrees but insists on consulting with Coco first. She stirs the next morning to the sight of all her clothes washed and mended. Claire is completely okay with Mamacita wanting her gone but realizes she still needs to convince Fogden. Talking to Coco seems to be the natural way to go.

Just when it seems like she’s convinced Fogden, they’re interrupted by Mamacita’s screams. Mamacita holds out the bloody head of one of the goats.

A Chinese sailor, she claims, has killed and roasted Arabella, the goat.

Man, I really wish I hadn’t been eating when watching this episode. Fogden releases a jar of carrion beetles on Arabella’s head. He says they are from Abandawe.

We get a flashback of Margaret Campbell prophesying about Abandewe, in case you needed a reminder. Fogden says it’s a powerful place in Jamaica where people disappear.

All mentions of powerful places in Jamaica go by the wayside when Fogden mentions that a Chinaman killed Arabella. Claire begs Fogden to ask Mamacita where she saw him. Still deep in the throes of grief, Fogden is confused why she’s so keen to know.

Mamacita, on the other hand, is like, “Hell yeah, they’re that way, you should GO.”

Claire hightails it towards the beach. The poor Artemis has been shipwrecked.

While I enjoyed Claire’s interactions with Fogden and Mamacita, I wish we could’ve had a bit more time for actually seeing how the Artemis gets shipwrecked. Even poor Captain Raines (Richard Dillane) isn’t given the luxury of dying on screen. We only learn that Raines and others died due to exposition from Fergus (Cesar Domboy). Jamie and the men are trying to get the ship back up and running again.

I loved that Marsali (Lauren Lyle) was working just as hard as the men to get back out sailing again.

Claire makes a mad dash towards the shore. I love how the music accelerates in tempo as she runs as fast as she can towards Jamie. She shines the piece of glass towards the somewhat functional Artemis. I love the way Jamie says “Sassenach!” when he sees her through the spyglass.

Perhaps it’s blasphemous to say, but there’s something even more satisfying to see the two reunite on the beach than in the print shop. Perhaps it’s because it’s finally clear that they both know they don’t want to be separated again.

They do say absence makes the heart grow fonder.

“Mac Dubh’s wife turns up in the most unlikely places does she not?”

Another image I enjoyed was Yi Tien Cho stitching Claire up. After enduring heat, ants, snakes, and a ship full of dying men, Claire only winces as he closes up her arm wound.

Jamie tells Claire that he blessed the marriage between Fergus and Marsali. He tells Claire that everyone could use a bit of cheer after so much death and destruction. What better way to raise spirits than a wedding? Claire knows just the man who can help them.

Yi Tien Cho sincerely apologizes to Fogden for killing Arabella. Offering a rooster as repentance, he bows his head in sorrow.

“There was a time when I was a stranger in a strange land,” Fogden tells him, accepting his apology. He offers him a smoke from his pipe, which Yi Tien Cho wisely accepts.

Marsali struggles to get dressed for her wedding. Claire steps in to help her. She asks if Marsali is nervous at all. Marsali is only nervous about one thing.

“When Fergus and I lie together, how do I not have a bairn?”

Although it’s very subtle, I love how Marsali can barely keep eye contact with Claire. It’s a mixture of embarrassment and a sign that she still doesn’t completely trust Claire.

She finally looks Claire in the eye when admitting that.

Marsali confesses that she doesn’t quite believe Fergus when he told her that she’d enjoy sex after the first few times. She saw how her mother would shrink before Jamie.

But then she saw how Jamie was with Claire. She wants that with Fergus.

Moved, Claire tells her she’ll show her what to do when they get back to the ship.

“Maybe you’re not the devil after all,” Marsali says.

Poor Father Fogden is clearly out of practice officiating the wedding ceremony. He motions towards another man, even though Fergus is clearly the groom. Marsali says she couldn’t care less that he’s missing a hand. Fogden ponders if Fergus might be missing his cock and Marsali’s like, “If ye hurry up with this I could find out already!”

Continuing to win my heart, Marsali tells Fergus matter-of-factly: “You know I’ve been waiting to bed you for months.”

I never thought I would utterly love Laoighare’s offspring, yet here I am.

Fogden asks for both of their full names. After waxing poetic about the name Marsali, and completely forgetting part of the wedding vows, he insists on hearing Fergus’s full name.

Fergus first says he has no last name, but then Papa Jamie finally speaks up.

The look on Fergus’s face when Jamie declares that he is his son is utterly priceless.

Fergus and Marsali are finally officially husband and wife. It’s one of those rare instances where we didn’t have to see the initial courtship to believe that they’re in love. The French pickpocket has had his own heart stolen!

Perhaps Father Fogden’s blessing upon Jamie and Claire’s marriage is the reason we finally have a somewhat peaceful ending?

If peaceful involves a feverish Claire getting drunk on Yi Tien Cho’s turtle soup and lustily making advances on her amused husband? As long as the two are together, I’ll take it. What made this scene my favorite part of the episode was just how at ease Jamie and Claire seemed with each other again.

Even when she’s drunk as a sailor, Claire is pretty damn efficient in preparing a penicillin shot for herself. I laughed when she tried to get Jamie to administer the shot in her backside.

Hey. Jamie couldn’t be good at everything.

He is clearly still excellent at pleasing his wife. The two have passionate sex when they’re interrupted by a knock from Yi Tien Cho. I laughed even harder as Claire tried to answer him in the midst of their sexy tryst.

Yi Tien’s Cho knowing smile was a great way to end the episode. It’s nice to see them get a happy ending. I’m sure there are rough tides ahead for our favorite couple.

Until next time Outlander fans! What do you mean there are only two episodes left? 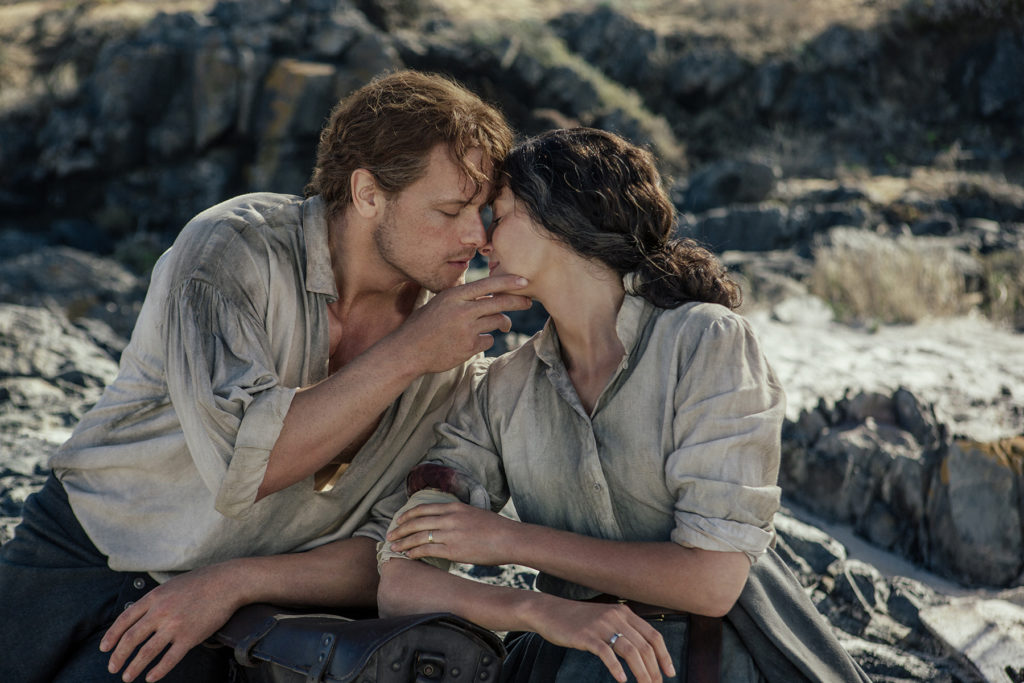 “The Artemis finally reaches Jamaica bringing Jamie and Claire that much closer to their goal. During a lavish ball on the island, the Frasers encounter old allies, as well as former adversaries who threaten to derail their mission.”