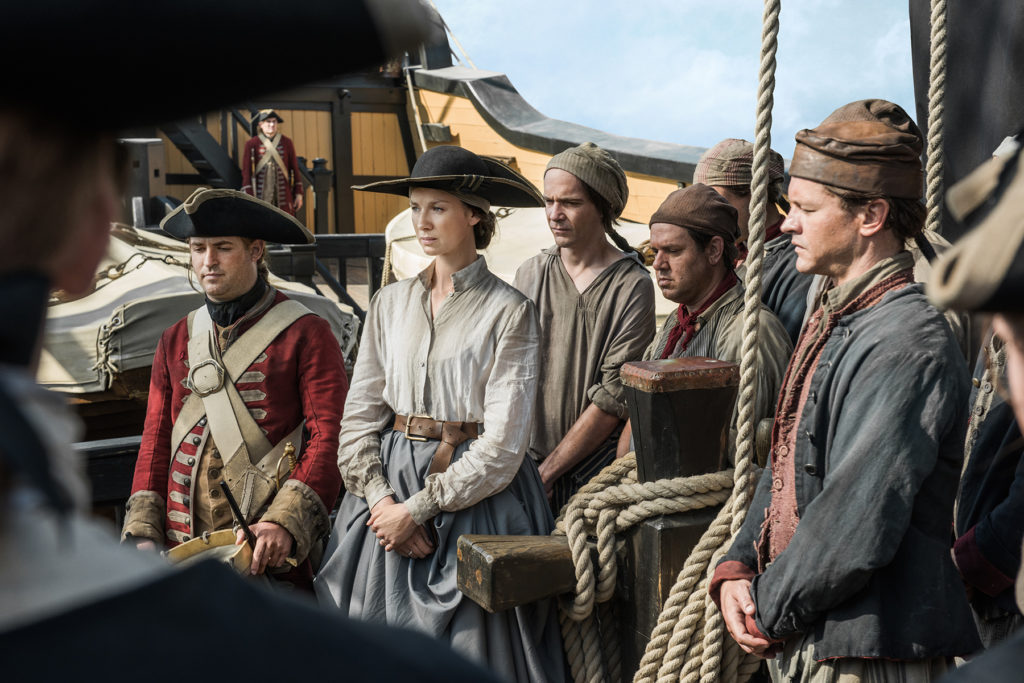 Below are excerpts from new interviews with Caitriona Balfe and executive producers Toni Graphia & Matthew B. Roberts. Be sure to click on the links to read the full interviews. Since these posts/interviews follow the latest episode, beware of spoilers for the current and future episodes.

At the end of Sunday’s episode of Outlander, “Heaven and Earth,” the script called for Claire (Caitriona Balfe) to quite literally take a leap of faith off of the Porpoise to help Jamie out of another jam. That meant a night of airborne action — and plenty of fun — on the show’s South Africa set last March.

“I did some rehearsals when we got there,” Balfe recalls to EW. “I was jumping off the side [of the ship] onto a cherry picker with a crash mat about 15 to 20 feet down. I was doing my jumps and climbing back up. It was really fun. It’s not an insignificant jump and you’re landing on a cherry picker, which is up in the air. They always want to make sure that everything’s done safely so I won’t break a leg and shut down production.”

Before making the jump, Balfe uttered Claire’s signature line of dialogue, “Jesus H. Roosevelt Christ.” It’s an expletive that comes in handy during moments of anxiety or frustration, but it’s not always so easy to deliver.

“It’s a funny one because when you read it in the book, you go through it fast in your head, but it’s a quite a mouthful to get out in moments of frustration when we would normally say ‘s—’ or ‘Christ,’” Balfe says. “In season 1 we had a lot more of them. The writers realized its not as succinct or doesn’t fit in as well as maybe when you read it in your mind. But it’s such a classic line from the books that we do try to find places for it. It would be a shame to lose it completely. We definitely don’t have a quota, but we try to retain fan favorite things as much as we can.”

Entertainment Weekly: Outlander: Why episode 10 was the smelliest of them all

When episode 10 was shot in South Africa last March, Roberts made sure the deck of the fictitious Porpoise was “stocked full of hammocks with literally s— and vomit and everything.” And the more, the better.

“My first note this season in South Africa was how there was not enough vomit, not enough s—,” recalls Roberts about filming aboard one of the practical ships at Cape Town Studios.

And needless to say, it made for an malodorous shoot.

“It was the first stuff that we shot when we arrived last week and for some reason, their fake vomit smelled like real vomit,” recalls Caitriona Balfe (Claire). “They made it with milk and it had gone rancid, so it was disgusting. There was a lot of free acting that went on there. It looked amazing, but every time we shot on any of those sets, it was cramped and hot and sweaty and was smelling not good.”

“We knew Jamie must be going nuts trying to get to her, and the challenge for us in the writers room was we wanted to see what Jamie was doing, and honestly, what can he do?” exec producer Tony Graphia tells The Hollywood Reporter. “He’s a hero, so he’d do something right? He would climb up over the railing with a knife in his teeth and rescue her. But we realized he really couldn’t do that. He’s outnumbered on this ship, it’s someone else’s ship with another captain. And that ship would never catch up to this military ship. How do you make a story out of that?”

That’s how they decided to get Jamie thrown into a cell for the majority of the episode. “We came up with this story where Jamie flips out and tries to do all these things and gets himself thrown in the brig,” Graphia says. “Our hero that we imagine would have jumped off the boat and swam after Claire is now locked up. For him, we made drama out of inaction instead of action.”

That allowed the heart of the story to become centered on emotion instead of high-stakes action, something that the Outlander team always tries to find ways to incorporate into its adventurous plot.